Home » All Recipes » Katsu-don (Pork Cutlet and Egg on Rice)

One of my children’s favourites, Katsu-don (カツ丼) is a very filling main dish. A bowl of rice is topped with tonkatsu (deep fried crumbed pork cutlet), onion and beaten egg cooked in dashi with sweet soy sauce. 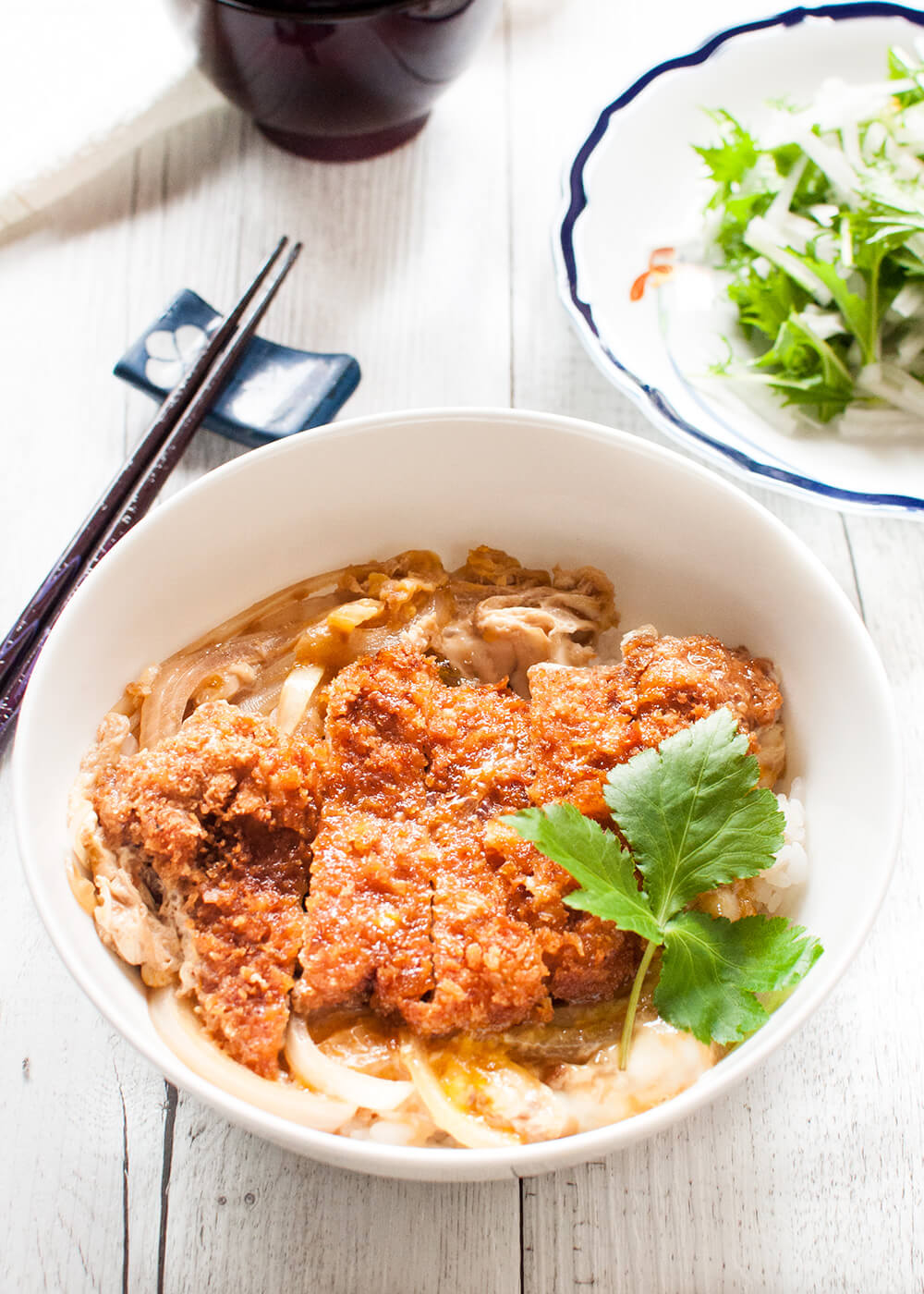 Katsu-don is one of many popular dishes among Japanese. It always makes it into the top 3 of the favourite donburi dish (rice with topping in a bowl) ranking. Apart from being a tasty dish, I think that the low price for the volume of meal you get must attract people. Katsu-don is about 500–600 yen (AU$6–7) at restaurants. 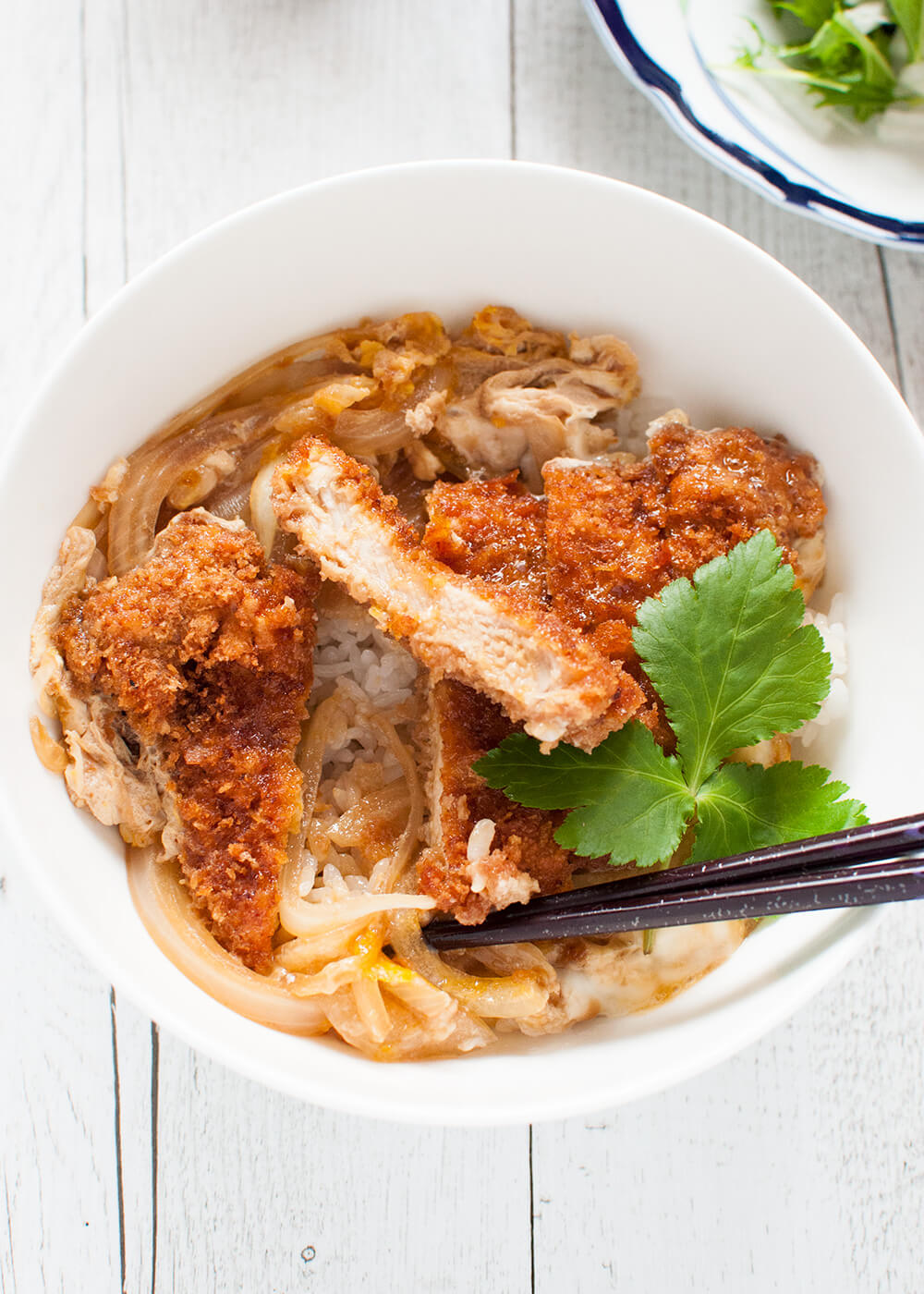 Deep fried cutlet and rice is quite filling. So, for those people who need to fill up their stomachs with high calorie food, katsu-don is a perfect meal. It is even served at noodle restaurants, which is handy because many salary men go to a favourite noodle shop to have a quick lunch and they can get a rice dish for a change.

It is indeed a quick dish to make, especially if you already have a cutlet made. Cut the cutlet, slice the onion, beat an egg, get the sauce ready. Cook the onion in the sauce, add the cutlet pieces, then pour in the beaten egg. When the egg is almost cooked, place it over the hot rice in a large bowl.

I posted Oyako-don (chicken and Egg on Rice) in February. Katsu-don is the same concept as oyako-don but with a different topping. Due to the deep fried meat on top, katsu-don is more filling, I think.

Just like how I made oyako-don, I used oyako-nabe (親子鍋, oyako-pot/pan) to make individual katsu-don (see the top photo below). But, if you have a small skillet or a fry pan, that will be perfect, too. 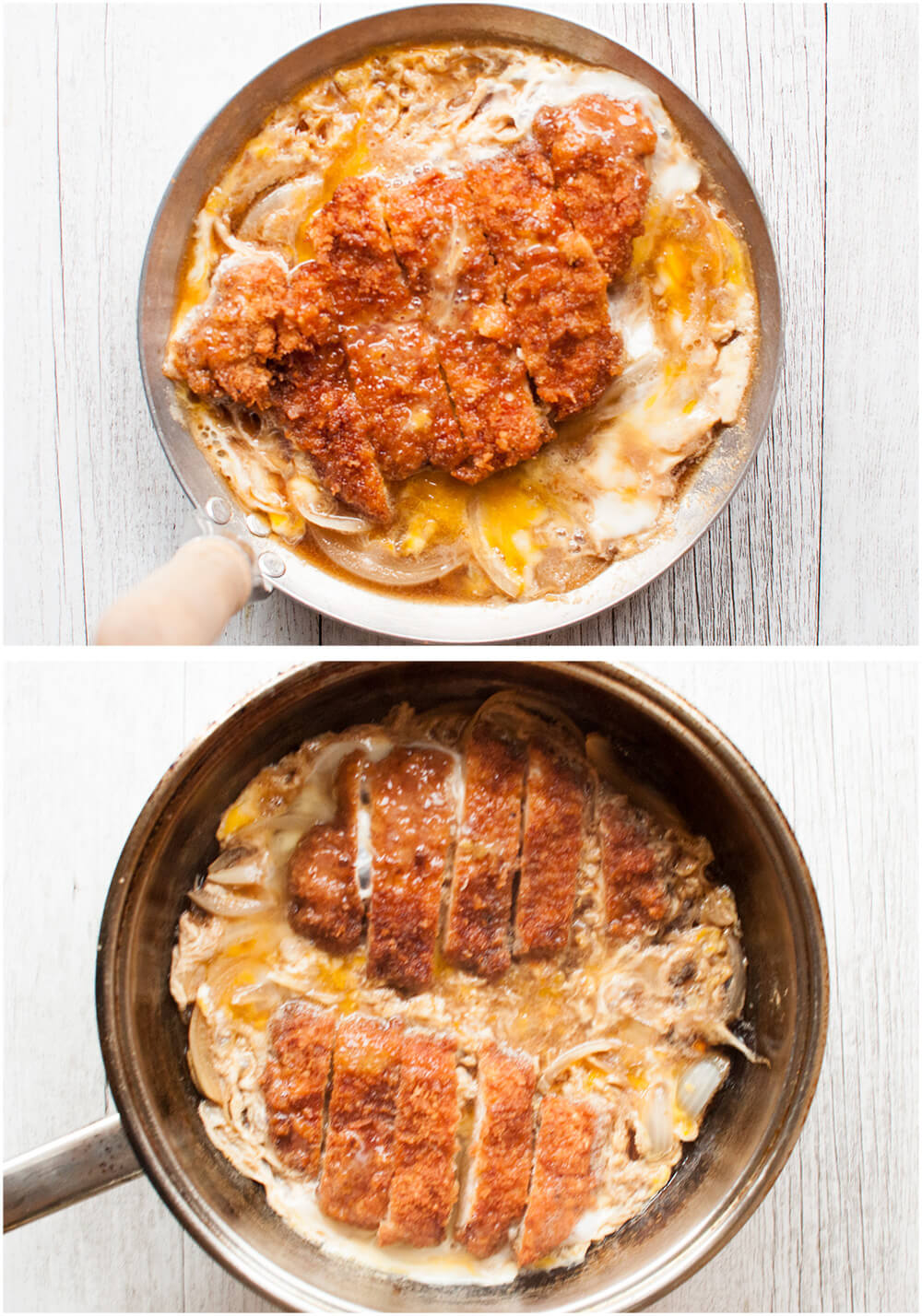 If you need to serve more than 2, say 4 people, just use a large frypan. Aim to place individual cutlet pieces in each quadrant so that it is easier to divide the topping into 4.

Tonkatsu can be a main dish on its own. It’s basically a Japanese version of schnitzel, although the meat is thicker and smaller since the meat is not pounded as much as schnitzel. If I am making tonkatsu as a main dish, I use meat that is about 1.5 – 2cm (⅝-¾”) thick. 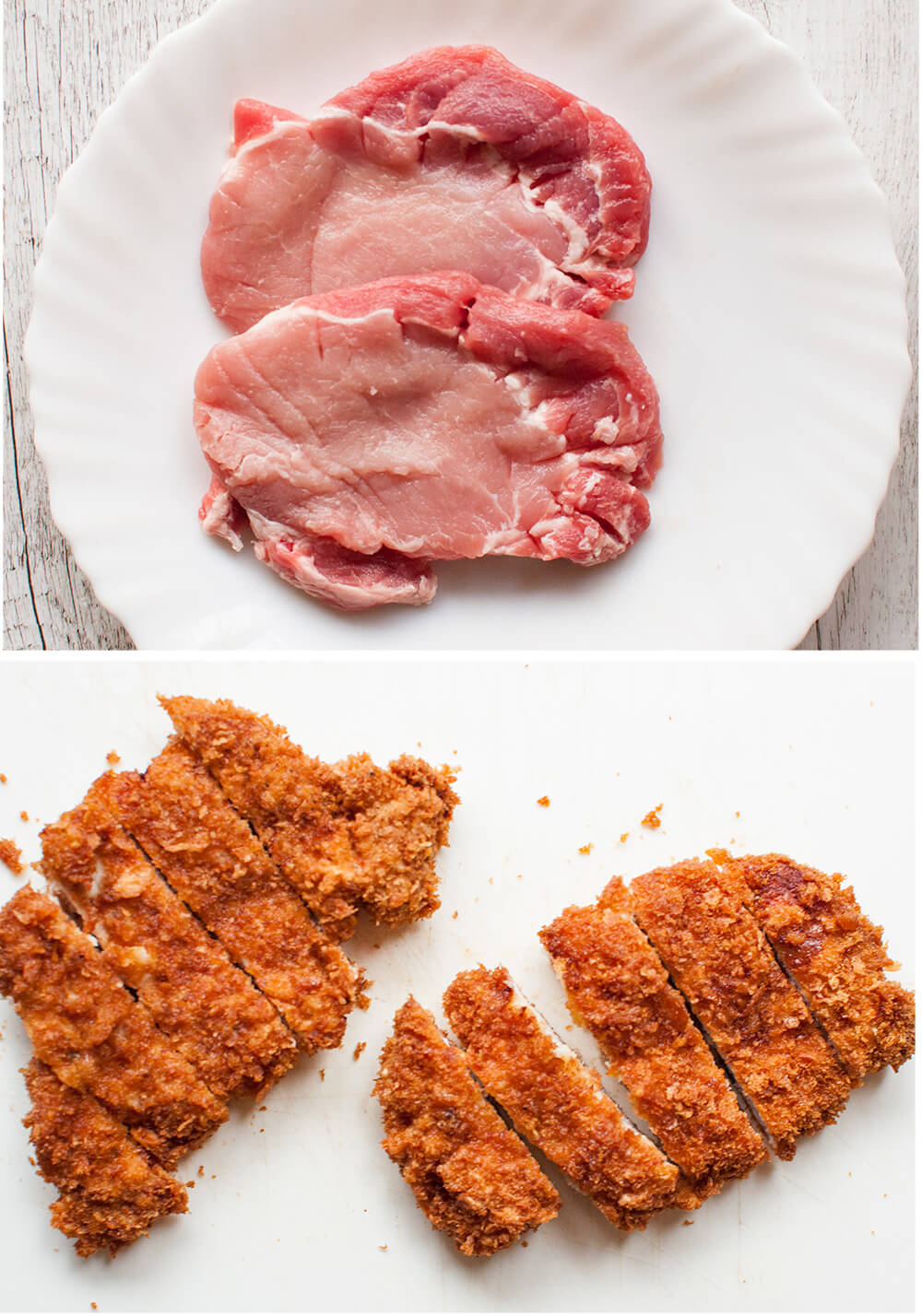 I usually use pork cutlet, pork loin chop or tenderloin to make tonkatsu. In the case of tenderloin, each tonkasu is rather small compared to other cuts but they are really tender.

If the meat has connecting tissue that separates red meat and a band of fat, you need to cut the tissue at 2-3cm (1”) intervals, which prevents the meat from shrinking when cooked. In the photo of the pork meat above, you can see the incisions I made along the connecting tissues which separate redder meat from pink meat.

Salt and pepper both sides of the meat, coat with flour, egg, Japanese bread crumbs, then deep fry. The time to fry the cutlet depends on the thickness of the meat. Meat that is 1.5cm (⅝”) thick takes about 5 minutes in total at 170C (338F). If you are unsure, poke the meat with a skewer or a chopstick and if the clear juice comes out, it is cooked through.

Tonkatsu is almost always served with shredded cabbage and a sprig of curly parsley, and sometimes with a couple of tomato wedges. 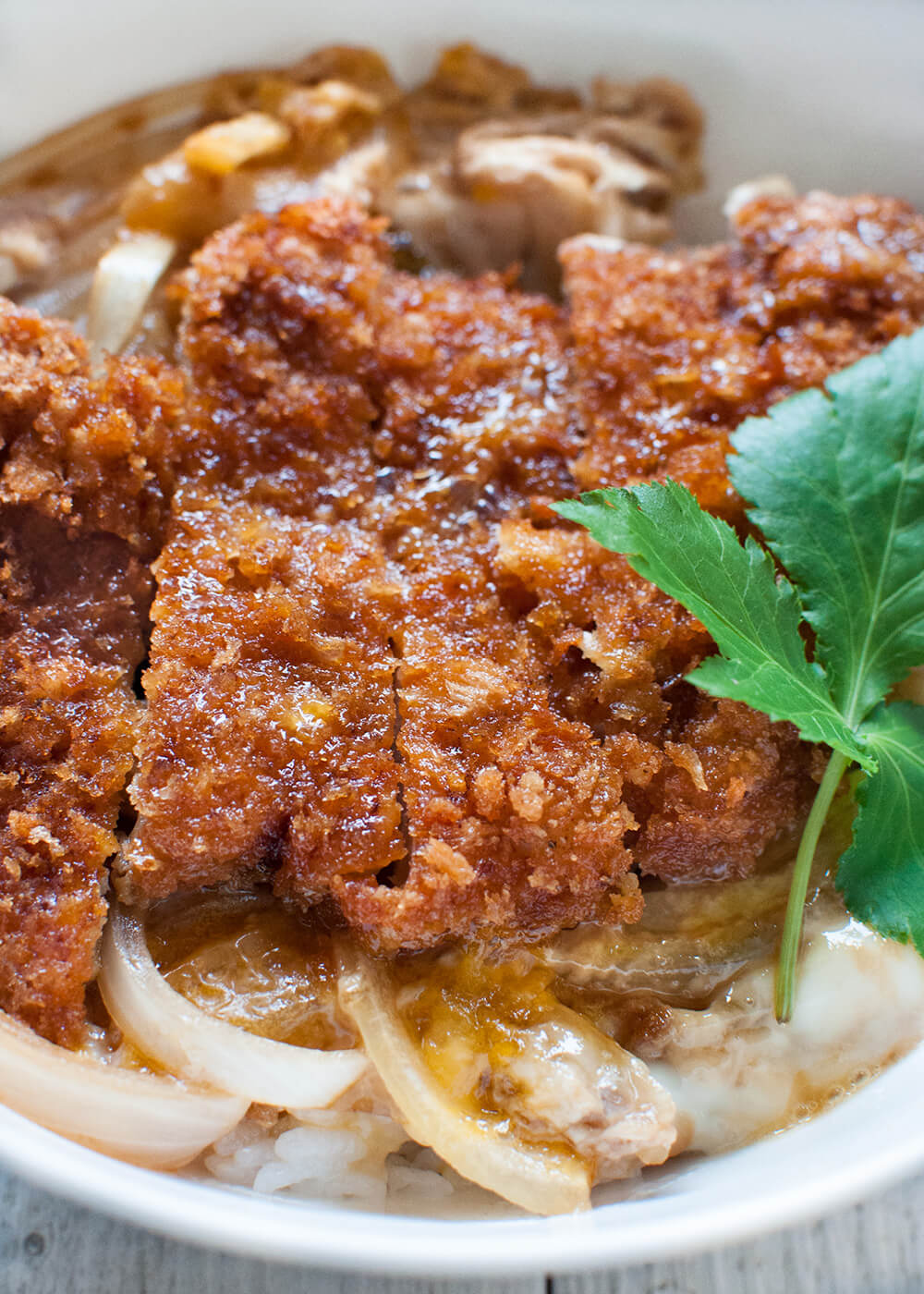 There is no difference between the tonkatsu used in katsudon and tonkatsu as a main dish. But I tend to use thinner slices, ie. 1.5cm (⅝”) thick, rather than 2cm thick. For this recipe, I bought a pork cutlet that was about 3cm (1 1/8”) thick and came with bones. In other countries, it might be called a pork chop. I removed the bones from my cutlet and sliced it into two, making two thin cutlets 1.5cm thick.

I use thinner tonkatsu so that most of the tonkatsu will be covered in the sauce when cooked in it, giving better flavour to the tonkatsu.

You can use frozen tonkatsu to make katsu-don, instead of freshly making it. Tonkatsu can be frozen after deep frying. Before using tonkatsu for katsu-don, thaw them, spray with oil and heat up in the oven to make them crunchy. If you already have tonkatsu made, katsu-don will be a super-fast meal to make. 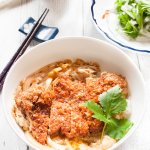 Katsu-don (カツ丼), is a very filling main dish. A bowl of rice topped with tonkatsu (deep fried crumbed pork cutlet), onion and beaten egg, cooked in dashi with sweet soy sauce. In this recipe you get two recipes – how to make tonkatsu and how to make katsu-don.

Prep Time and Cook Time include time to make tonkatsu. It also assumes that katsu-don is cooked one by one.

1. You can use other cuts of pork if you like. Thickness can also vary but it should not be too thick otherwise the tonkatsu will not be covered enough in the sauce.

2. To check the temperature of the oil without a thermometer, use one of the following.

a. Drop small bits of breadcrumb into the oil. The bits will sink half way and then come up with small bubbles around them.

b. Stick a pair of bamboo chopsticks into the oil. Small bubbles appear around the chopsticks and come up constantly.

3. If your meat is thicker or thinner, the time required to fry the meat will be longer/shorter respectively. If unsure, poke the tonkatsu with a skewer or a chopstick to see if clear juice comes out.

5. If you prefer the egg to be well done, cook a bit longer with the lid on.

6. If you are making for 4 people at once, use a large fry pan and place each tonkatsu in each quadrant so that it is easier to divide the katsu-don topping into 4.