I call it stew but Japanese Meat and Potato Stew is nowhere near the Western style stew. The cooking liquid is based on the usual Japanese flavours of slightly sweetened soy sauce with dashi stock, but is not thickened. It is perhaps closer to Irish stew with Japanese style broth. 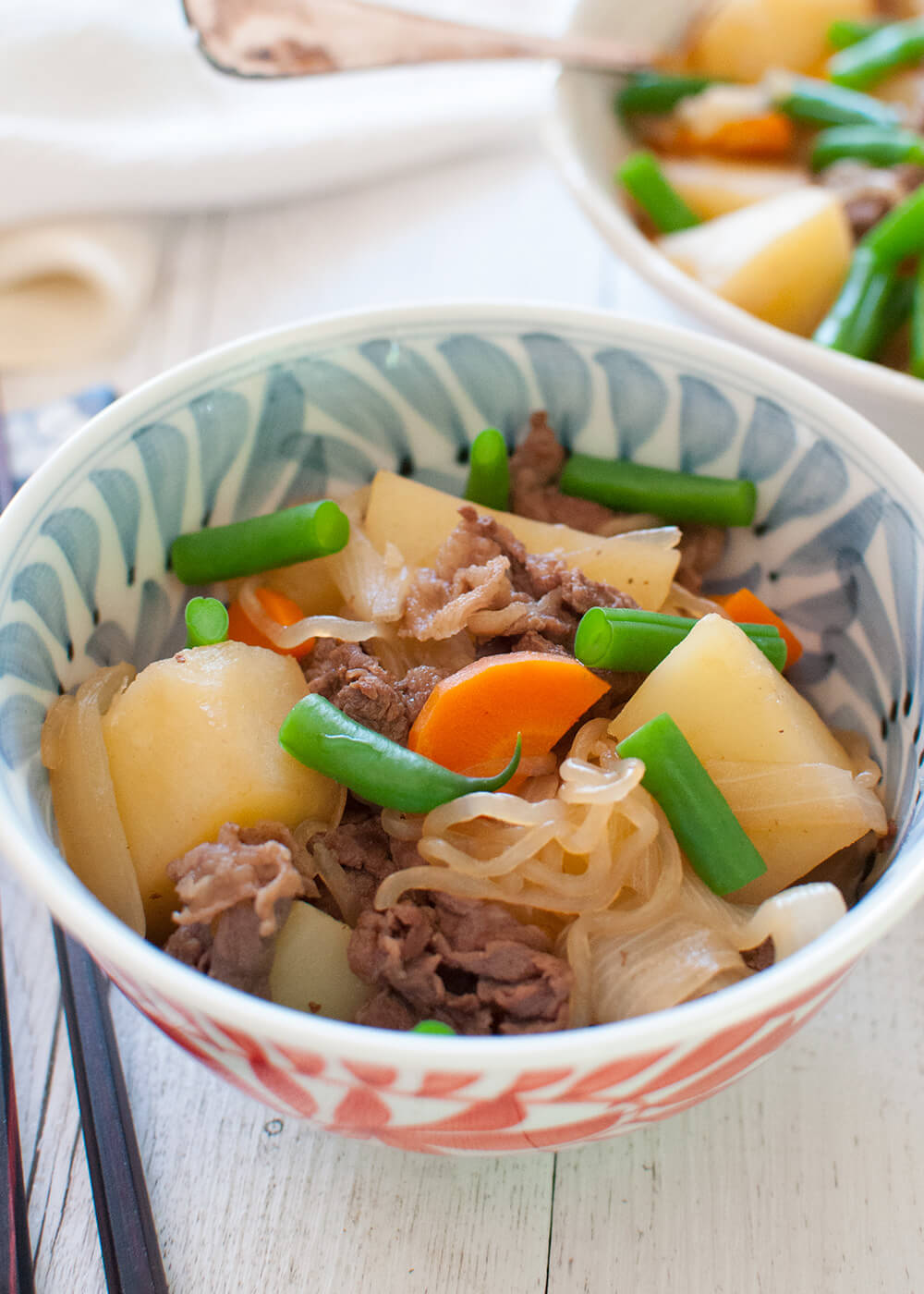 This stew is called ‘nikujaga’ (肉じゃが) in Japanese, which literally means meat and potatoes – the key ingredients of this dish. Meat is ‘niku’ (肉) in Japanese and potato is ‘jagaimo’ (じゃがいも).  But instead of calling it ‘nikujagaimo’, the word for potato is shortened to ‘jaga’. Come to think of it, I think Japanese is good at shortening words to make them catchy.

There is a serious debate over whether or not the meat should be beef or pork. Some people did a survey on this and found out that the meat preference is clearly divided into the eastern region and the western region, separating the main land Honshu in the middle. People from the western part of Japan prefer sliced beef while the people from the eastern part of Japan use sliced pork.

The only exceptions to this are Okinawa and a couple of prefectures in Kyushu that are close to Okinawa and use pork. This is understandable as Okinawa = pork dishes. 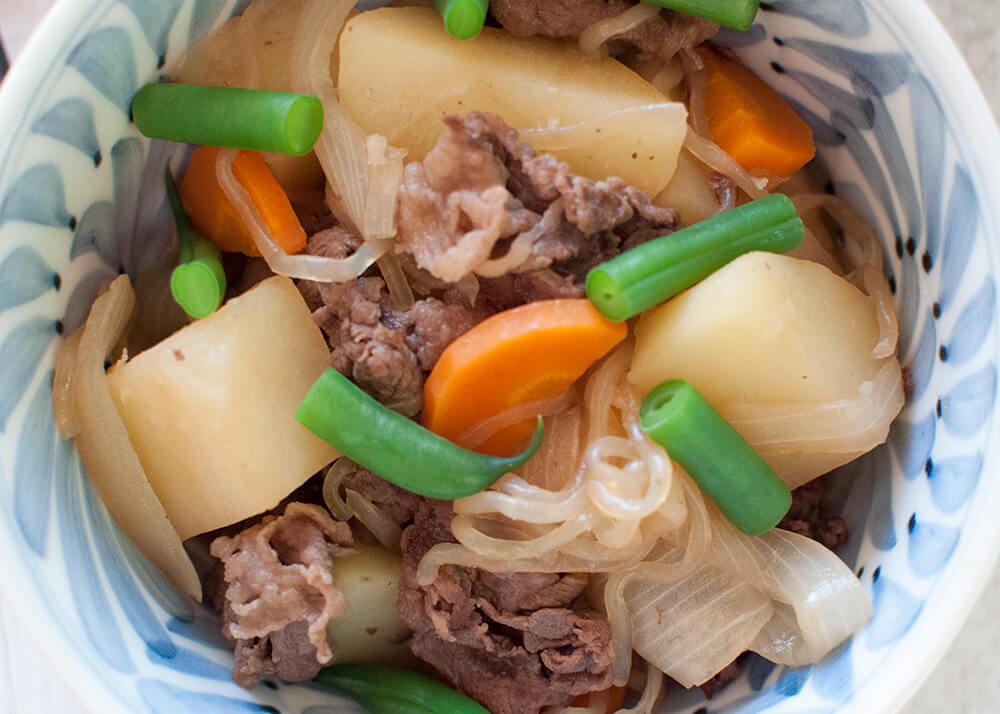 I am from Tokyo which is considered to be the eastern part of Japan but I don’t have a particular preference. I just use whichever meat is at hand.

The story about how nikujaga was invented is quite fascinating. It was the late 19th century. The chef of the Imperial Japanese Navy was asked by the then Marshal-Admiral, Heihachirō Tōgō to make a beef stew that he became fond of while studying in Portsmouth, England. Since the chef had never seen the beef stew, nor tasted it, he made it up using typical Japanese flavouring and that’s how nikujaga was invented.

Given the fact that beef stew was already on restaurant menus at the time, this does not seem to be a true story. However, the city of Maizuru in Kyoto prefecture and subsequently the city of Kure in Hiroshima prefecture both declared that they were the place where nikujaga was created and Heihachirō Tōgō was once stationed in both places. So nikujaga must be somewhat related to Tōgō.

In addition to meat and potatoes, sliced onions and carrots are the minimum ingredients to make nikujaga. Often, konnyaku yum noodles called shirataki (please visit the post Sukiyaki to see more photos of shirataki) are also added to it. 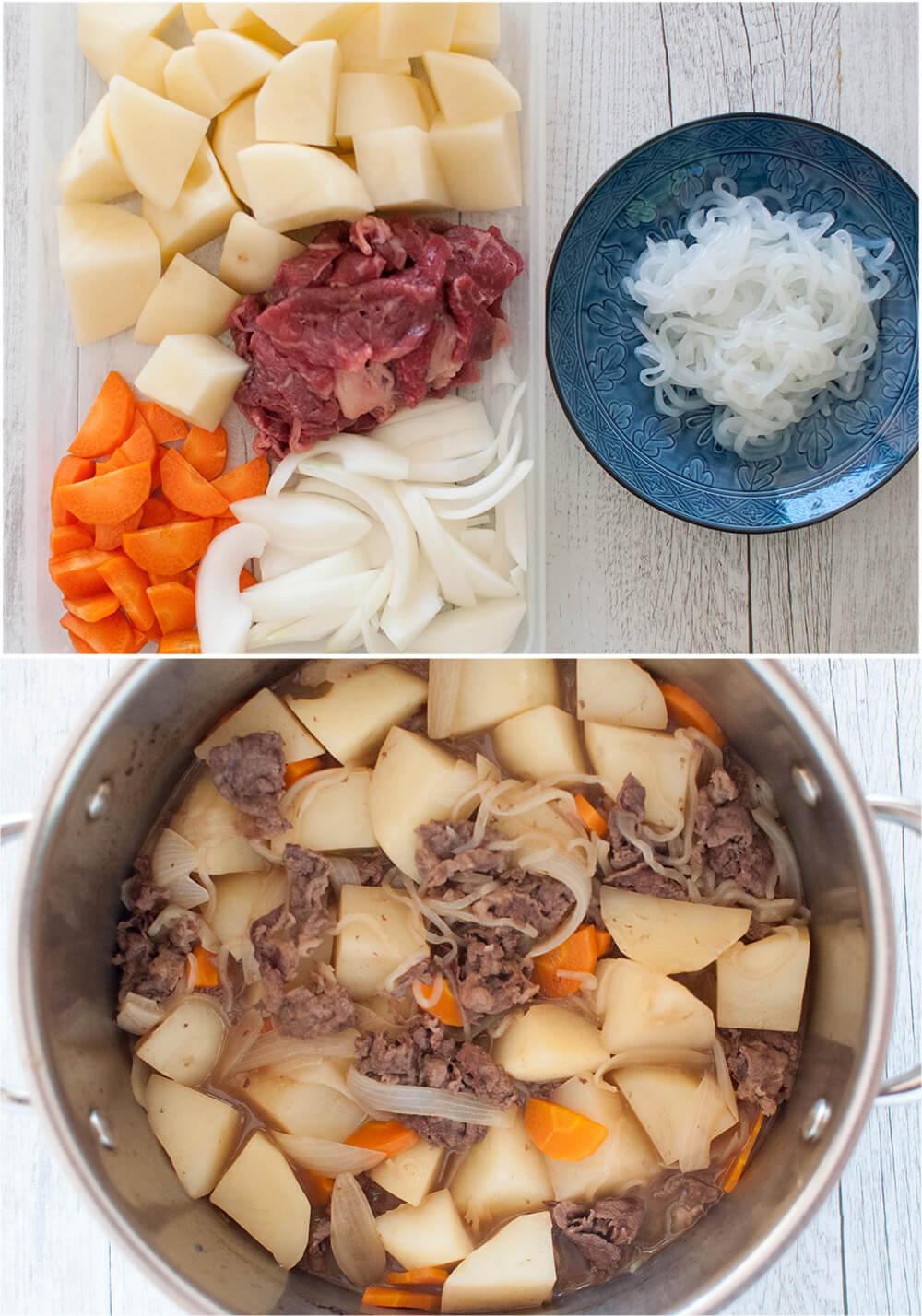 The flavouring is the usual Japanese flavouring consisting of dashi stock, soy sauce, mirin, sake and sugar. The ingredients are lightly sautéed first, then cooked in the flavoured broth. When the potatoes are cooked through, it is ready to serve.

The colour of carrot gives nikujaga, which is otherwise a brown dish, a bit of colour but I tend to add something green as garnish. Green vegetables that go very well with nikujaga include green beans, snow peas and peas.

If you are adding green beans, blanch them and then cut into about 3cm long. Snow peas also need to be blanched. Use them as is or if large, cut them in half diagonally. As for peas, I usually use frozen peas by quickly boiling them to defrost and warm up. Scatter them after plating nikujaga.

Today, I used sliced beef for nikujaga but if you prefer pork, simply replace the beef in the recipe with pork. Regardless of the type of meat you use, it is important to use thinly sliced meat as the cooking time is very short and the stewed meat needs to become tender in a short period of time. 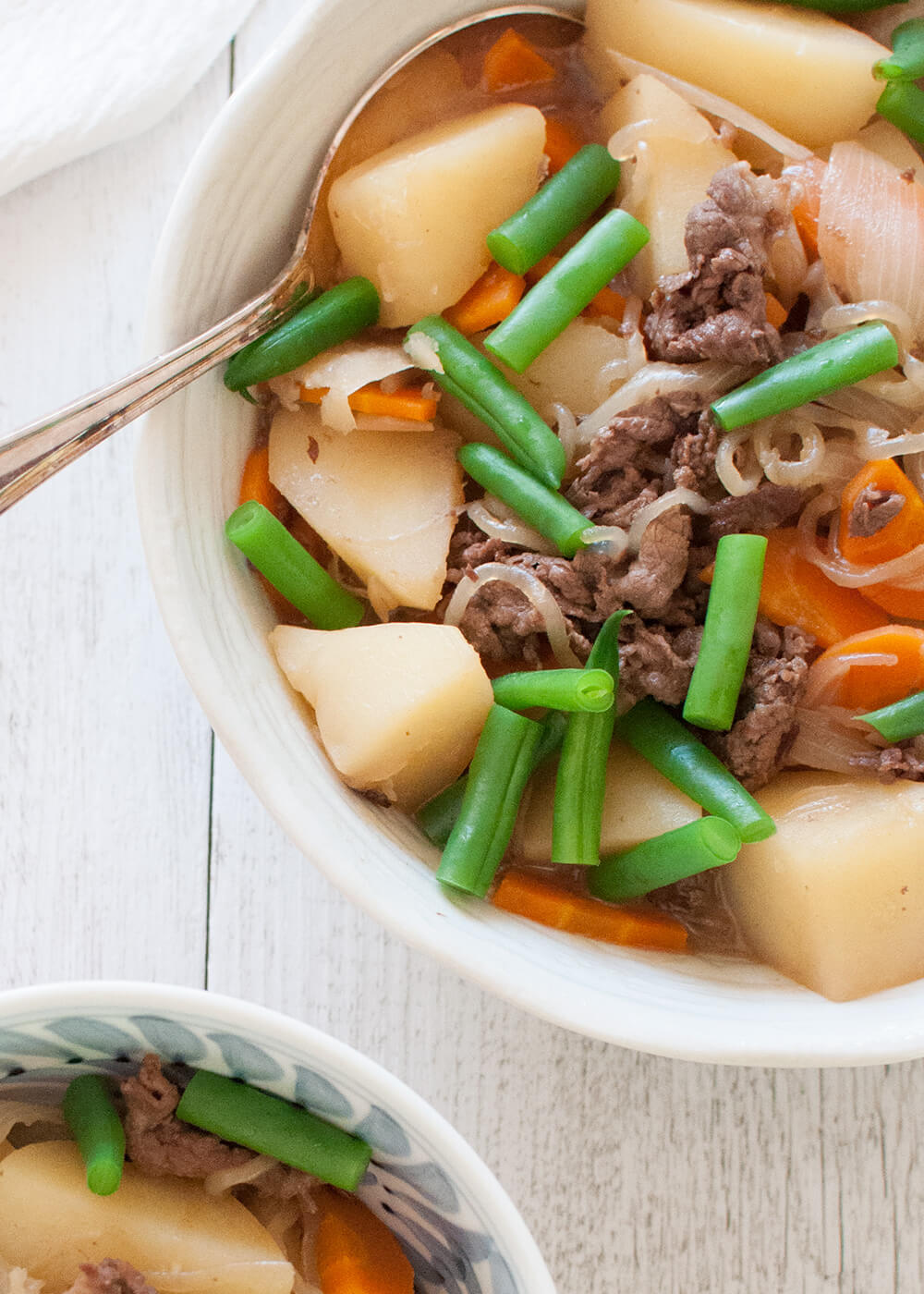 Nikujaga is considered to be a representative home cooking dish. It is even said that nikujaga is the taste of mum’s cooking and perhaps because of this, many Japanese men seem to like nikujaga (don’t ask me why only men). Come to think of it, my father liked it and my son likes it more than I do.

As long as the meat is not for stewing (because you don’t cook the meat for a very long time) and is very thinly sliced, any part of meat can be used for this dish. You will be surprised to learn that it is so simple to make but so tasty and filling. 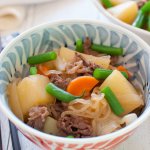 I call it stew but Japanese Meat and Potato Stew is nowhere near the Western style stew. The flavour is based on the usual Japanese flavour of slightly sweetened soy sauce with dashi stock and the sauce is not thickened. It is perhaps close to Irish stew with Japanese style broth.

1. Instead of beef, you can use pork slices. If you can buy sliced beef or pork, that would be the easiest. They are sold at Asian/Japanese butcher and grocery stores.

You can also slice a block of meat thinly yourself - please visit my post Beef Rolls with Asparagus.

2. My carrot was very thin, so I cut it in half to make semi-circle pieces. If the carrot is thick, cut it into quarters to make wedge-shaped pieces.

3. You can buy shirataki at Japanese/Asian grocery stores. Please visit my post, Sukiyaki for more details about shirataki with photos.

4. Instead of green beans, you can use blanched snow peas or frozen peas that are boiled to warm up.

5. A drop lid is called 'otoshibuta' (落し蓋) in Japanese. It is a round lid that is slightly smaller than the opening of a saucepan. It is traditionally made of wood but I have a stainless steel lid. It is placed on top of the ingredients in a pot to ensure the heat is evenly distributed, ingredients cook faster, and stay in place without breaking apart. It also stops the liquid from evaporating quickly.

If you don’t have a drop lid, you can make one with aluminium foil. Cut a square foil, fold the edges to make it a round shape with the diameter slightly smaller than the pot. Then poke the foil with a knife or a chopstick to make holes in several places.

6. Potatoes suitable for stewing like Nikujaga are waxy potatoes or all rounder potatoes. Starchy potatoes do not hold the shape together when cooked and should be avoided for this dish.