Dried Shrimp and Sprouts Salad is a perfect salad if you want to consume a large amount of bean sprouts at once. The generous amount of dried shrimp adds a great flavour and umami to this salad. I like the colour combination too. 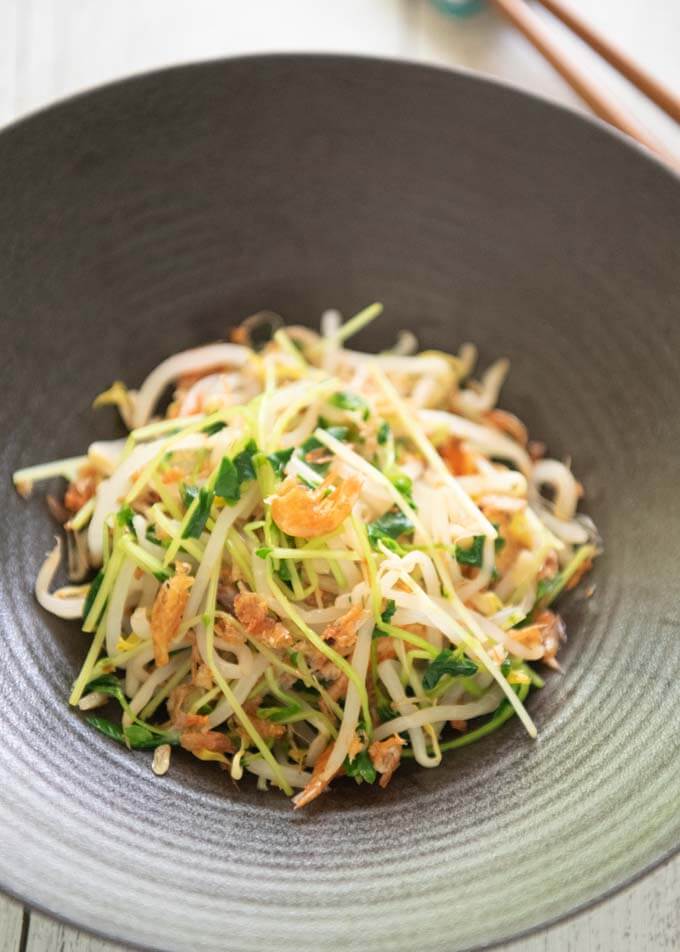 I was so pleased to have found them that I had to buy them and make a dish using them. Today’s dish, Dried Shrimp and Sprouts Salad makes the colour of the dried shrimp stand out.

What’s in my Dried Shrimp and Sprouts Salad

My salad consists of three salad ingredients. The dressing has a good dashi flavour and does not have acidity at all. 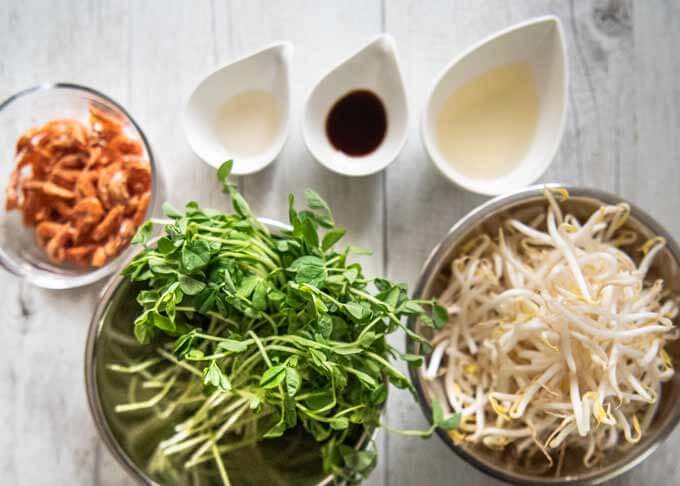 I bought a bag of dried baby shrimp from a Korean grocery store (left bag in the photo below). I think they are the closest to the Japanese version – hoshi sakura ebi (right photo below). The bright orange colour stands out in the salad.  You can also use Chinese dried shrimps, although the colour of the shrimp is not as bright as the Korean version.

I subsequently found a bag of Japanese dried shrimp (middle photo above) from a Japanese grocery store. This is not hoshi sakura ebi, but the paper-thin texture is similar.

I used snow pea sprouts to go with the bean sprouts as the size of the sprouts are comparable. You could use other sprouts but then you should use them fresh instead of blanching them. They are so tiny and fragile.

To enhance the flavour of the dressing without making it too salty, I made a strong dashi stock by using a larger quantity of bonito flakes and konbu. If you are using dashi stock powder, increase the quantity of the powder.

How to Make Dried Shrimp and Sprouts Salad

Salads are usually quick to make, and this is no exception, even if you need to blanch the sprouts and roast the dried shrimp. 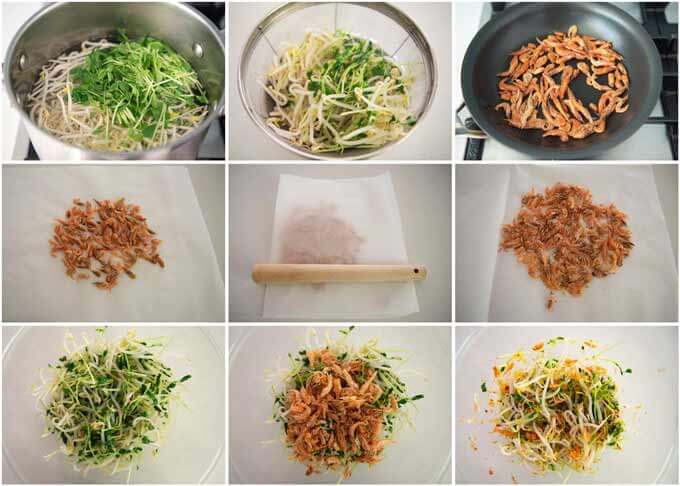 After blanching the sprouts, let them cool down naturally. Do not put them in cold water to speed up the cooling process. The sprouts become too soggy, and you will have to squeeze the water out, which crushes the sprout stems.

I needed to flatten the dried shrimp slightly because the Korean dried shrimps that I bought were not paper-thin like the Japanese sakura ebi, particularly the head.

If you are using Japanese dried shrimp, aka hoshi sakura ebi, or another kind of paper-thin dried shrimp, you don’t need to flatten them. 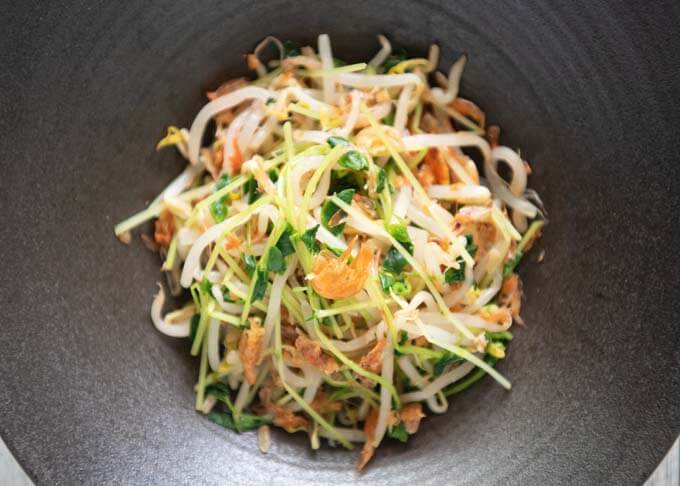 Dried Shrimp and Sprouts Salad is a very lightly dressed salad because you don’t want to lose the wonderful flavour of the shrimp. It is an oil-free healthy salad, and you can make this salad a day or two ahead. 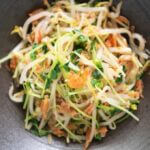 Dried Shrimp and Sprouts Salad is a perfect salad if you want to consume a large amount of bean sprouts at once. The generous amount of dried shrimp adds a great flavour to this salad. I like the colour combination too.

If you can’t get the Korean version, you can use Chinese dried shrimp that are not as bright in colour but paper-thin.

Note: I subsequently found a pack of Japanese paper-thin dried shrimp from a Japanese grocery store. They are not sakura ebi but the size and texture are very similar. See the photo in post.

2. Snow pea sprouts are comparable in size to bean sprouts. You can also blanch them. You can use other kinds of sprouts such as broccoli sprouts.

If you are using sprouts other than snow pea sprouts, you don’t need to blanch them as they are so tiny.

3. Since the flavour of the dressing is quite light, I made a strong dashi stock to give more umami to it. Increase the quantity of bonito flakes and konbu by about 50% using the method in Home Style Japanese Dashi Stock.

If you are using instant dashi stock powder, you can increase the amount of powder to make the stock stronger.

4. Do not over-crush the prawns. The idea is to flatten the thick part of the shrimp, particularly the head, while retaining the shape of the shrimp where possible (see the step-by-step photo).

If you are using paper-thin dried shrimp, you don’t need to do this.

5. You can make this salad a day or two ahead. Store the sprouts in the fridge but the shrimps should not be in the fridge. Dress the salad just before serving.

After I made Dried Shrimp and Sprouts Salad, I actually had a traditional Japanese-style meal with it as a side salad. It was my late breakfast.

A traditional Japanese-style breakfast has to include a grilled fish. I grilled a piece of salmon marinated in Saikyo miso (I usually make many marinated fish fillets and freeze them), but you can have any kind of grilled fish such as semi-dried whiting fillets and salted salmon.

Hijiki is another typical side dish that makes up a traditional breakfast. A simmered dish always appears in Japanese-style breakfast since the dish usually keeps well in the fridge. 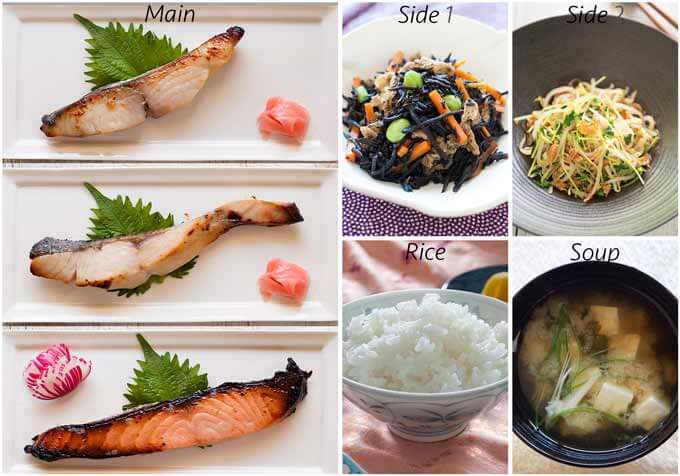