Seasoned minced prawns are put between lotus root slices, then deep fried. Deep Fried Lotus Root and Prawn Sandwiches can be an appetiser, a side or a main. It all depends on how much you want to make and serve. 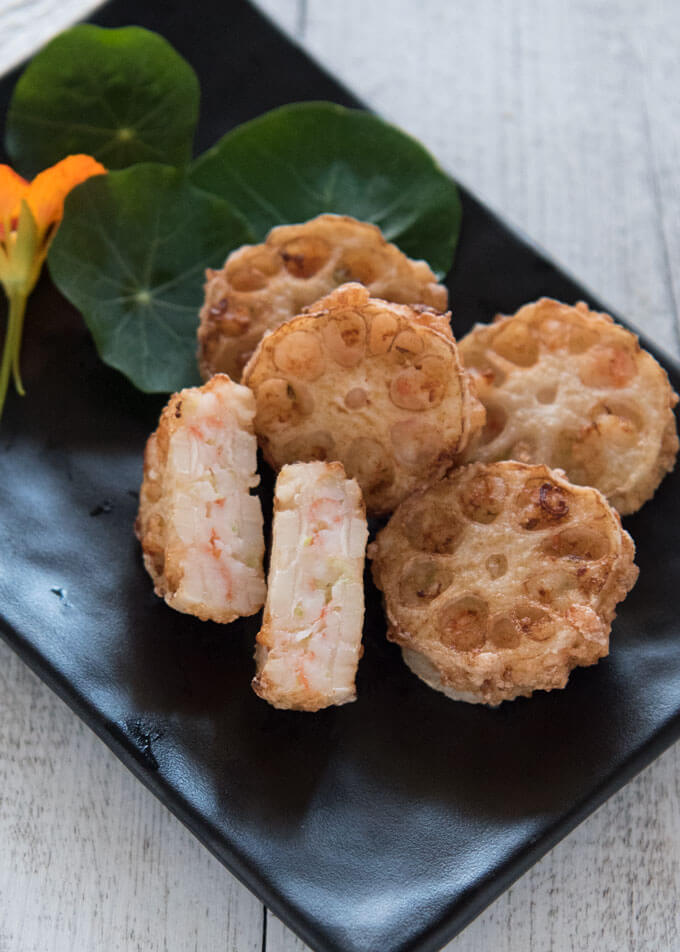 Deep Fried Lotus Root and Prawn Sandwiches (Renkon no Hasami Age) is a curious looking dish. But if you have ever had lotus roots before and you liked them, you will know before tasting this that it’s going to be a great dish.

Crunchy lotus roots on the outside, meaty prawns inside with great flavour. I can guarantee you that you won’t be able to stop munching them.

When one ingredient is sandwiched with another ingredient and deep fried, Japanese people call it hasamiage (はさみ揚げ). The word hasami (はさみ) comes from the verb hasamu, which means putting in between two things, and age (揚げ) means deep frying.

Renkon (蓮根) is lotus root and the name of the ingredient that the other ingredient is placed between. It is one of the commonly used ingredients to make hasamiage. 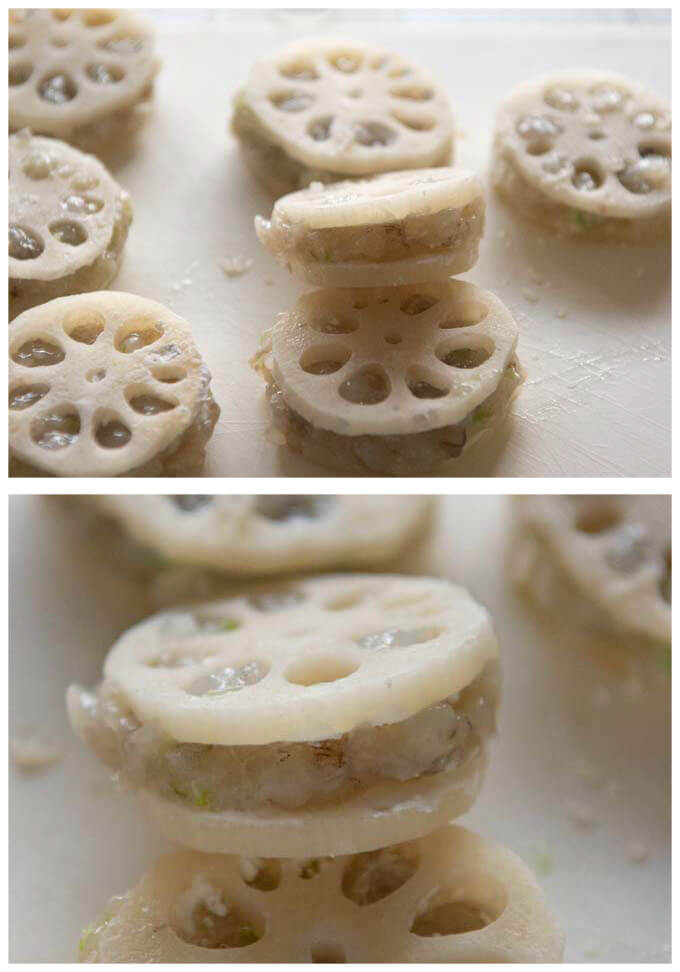 Another vegetable often used to make hasamiage is eggplant. Eggplants are cut vertically into halves or quarters with the stem end intact. Then other ingredients are stuffed between them. I will one day post Eggplant Hasamiage.

The ingredients that are put between the vegetables are either seasoned prawns or minced meat (ground meat), usually pork or chicken. I used prawns today to go between the lotus root slices, but pork mince is equally as popular to make Renkon no Haamiage.

If you don’t count the seasonings included in this recipe, there are only two ingredients to make today’s dish – lotus roots and prawns. And these two ingredients shine in their own way.

Fresh lotus root is sliced thinly to 3-4mm thick. The sliced lotus roots need to be left in water with a small amount of vinegar so that they do not discolour.

Fresh prawns are minced, mixed with some chopped shallots/scallions, and seasoned with ginger, sake, soy sauce and salt. 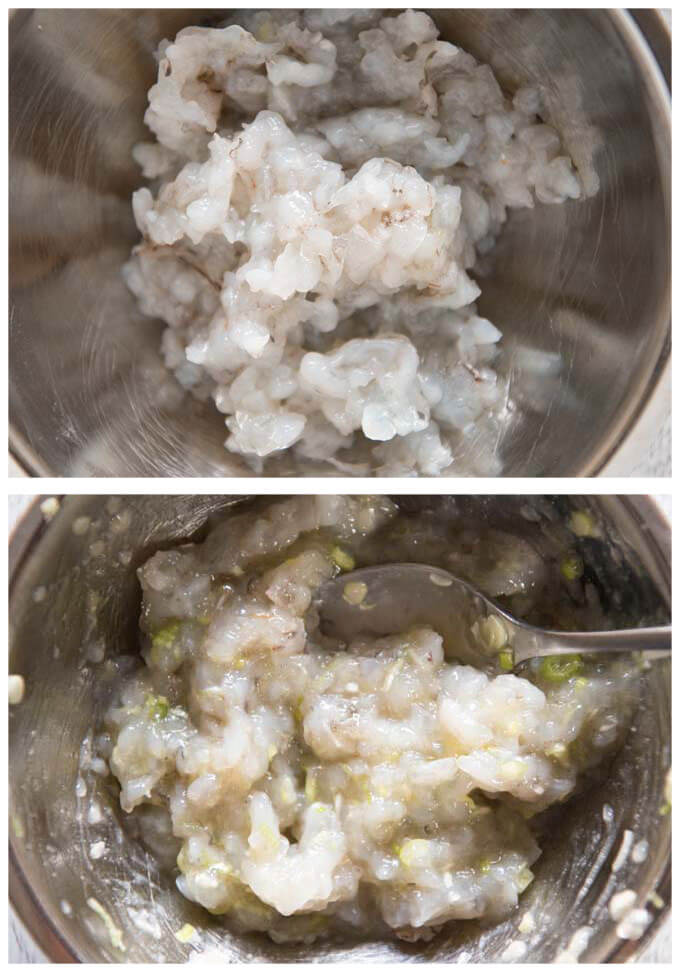 When you mince raw prawns, they become quite sticky so you don’t even need to add cornflour or flour to bind the prawn mixture. This is what makes the prawn flavour of this dish so strong.

It is quite a simple process to make a sandwich:

The best part of today’s dish is the crunchiness of the lotus roots. Sliced fresh lotus roots are deep fried without flour or cornflour around them. 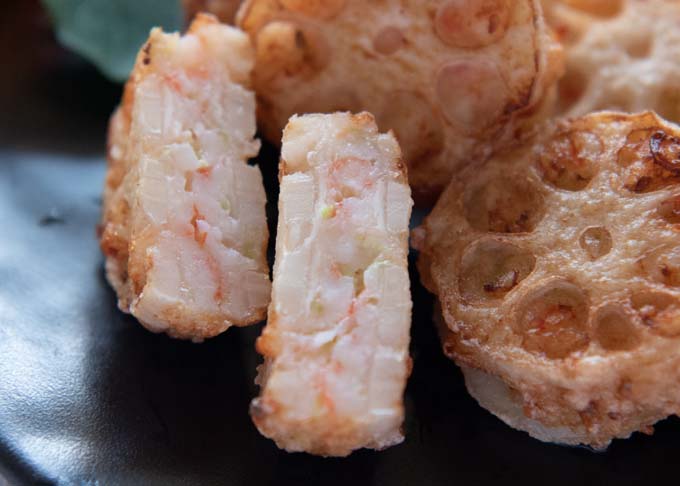 You don’t need a sauce to eat Deep Fried Lotus Root and Prawn Sandwiches (Renkon no Hasami Age) as the prawn mixture is seasoned very well. I didn’t add any garnish to go with it, but you could use lemon wedges if you wish.

My lotus root was quite small so I served the sandwich as a whole. But if your lotus root is large, you may want to cut the sandwiches in half after cooking as seen in the photo above.

Any deep-fried food is great to eat while hot but Deep Fried Lotus Root and Prawn Sandwiches (Renkon no Hasami Age) is delicious even if it is at room temperature. It’s a great dish to go in a bento box. 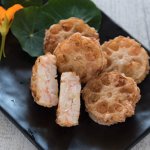 Seasoned minced prawns are put between lotus roots slices, then deep fried. Deep Fried Lotus Root and Prawn Sandwiches can be an appetiser, a side or a main. It all depends on how much you want to make and serve.

2. You can use frozen prawns.

3. Use the white part if possible.

4. Garnish is optional but given that the dish is brownish with mot much variations, I thought something needs to accompany it. I grow nasturtium, so I used it today, but it can be a sprig of parsley. A wedge of lime would be good, too.

When placing in the vinegar water, try to maintain the order of the slices so that you can pair the slices that were next each other.

6. You can use a food processor but the intention is not to make a paste but to chop them into small pieces so that you get lumps of meat when cooked.

7. With my lotus root slices of about 5cm/2" in diameter, I could make 10 of them. If your slices are much larger, you will need less slices but more prawn mixture per sandwich. Then cut the sandwich in half after cooking.

Today’s recipe, Deep Fried Lotus Root and Prawn Sandwiches (Renkon no Hasami Age) is a main in today’s Meal Ideas. Since the main dish does not contain a lot of prawns, I picked Chikuzenni as Side dish 1 to supplement a little bit of protein. Shimeji Gohan in a rice bowl also contains a small amount of chicken pieces. 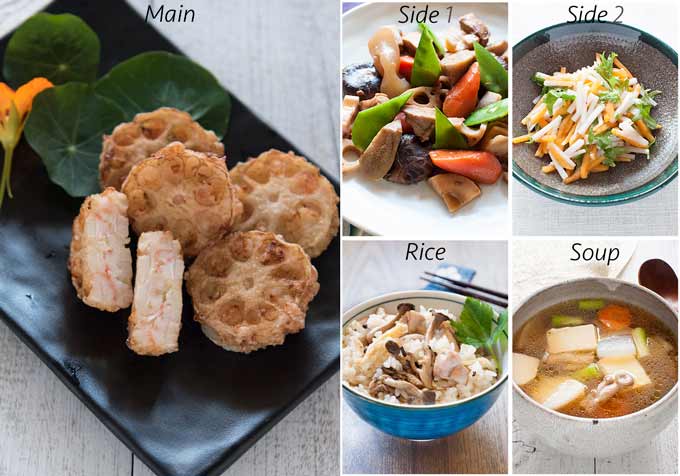