Hinomaru Bento is a bento that consists of just white rice and an umeboshi (pickled plum) in the middle. Around the time of WWII when there was a shortage of food, people ate such a simple food for lunch. But these days, Hinomaru Bento is served with several other dishes, like today’s bento recipe, Hinomaru Bento with Saikyo Yaki Fish. 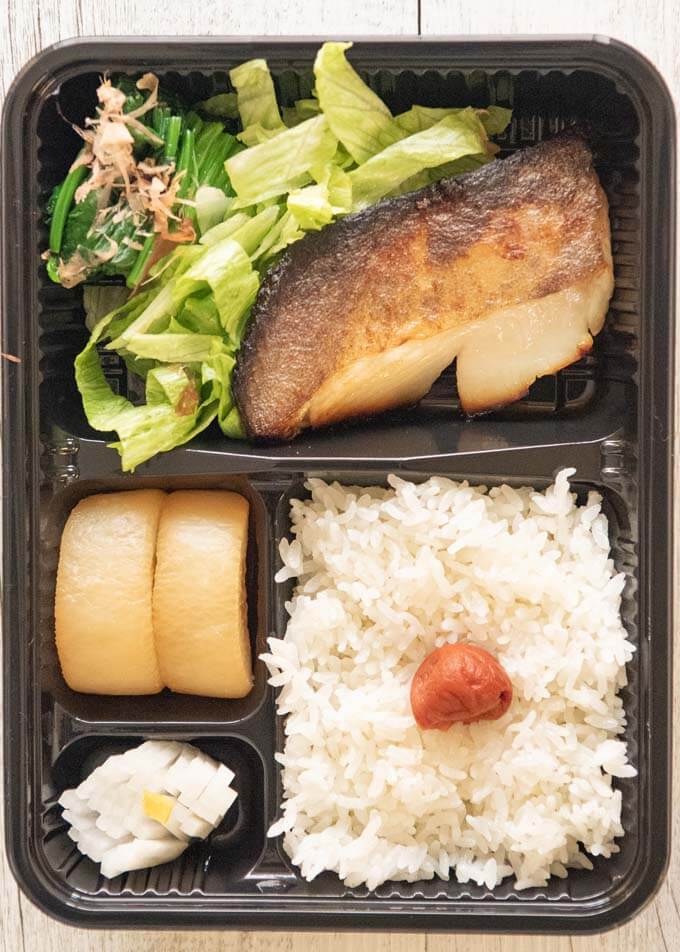 One of my favourite main dishes for a bento box is Saikyo Yaki. Among all the different kinds of grilled fish dishes, Saikyo Yaki ranks in my top 3 of the main ingredients for a bento box, especially if the fish is black cod (sable fish).

I found frozen black cod cutlets sold at the fish shop close by. I was so excited to see them. Unfortunately, it turned out that the fish was black halibut. But for a piece of halibut, the flesh was quite oily and it was perfect for Saikyo Yaki.

Preparing to make today’s bento is not time consuming because 4 out of the 7 bento ingredients are pre-made. You just need to grill the fish and blanch the spinach (if you are not blanching it the previous night).

The word ‘hinomaru’ (日の丸) translates to circle of sun. But in Japanese, hinomaru means the national flag of Japan (because a red rising sun is in the centre of a white background). That’s why the bento that has a pickled plum in the centre of white rice is called Hinomaru Bento.

You could say that Hinomaru Bento is a patriotic bento due to the history behind it.

During the war, Japanese people were encouraged to live as minimalists, eating such a simple food consisting of rice and a pickled plum. This was to remind themselves of hardships of the battlefield.

School children brought Hinomaru Bento for lunch. When the food situation worsened, children from poor families could not even afford white rice. They had to mix vegetables and other grains with white rice to fill the bento box. These children were envious of the white rice in the bento lunch box of the children from wealthy families. It must have been a sad experience for these poor-family kids.

In addition to resembling the Japanese flag, it is said that the pickled plum acts as a rice preservative because of its citric acid. Umeboshi with 20%+ salinity even has an antiseptic effect. But the current theory is that the positive antiseptic effects are within umeboshi itself and do not protect the rice from getting spoilt. 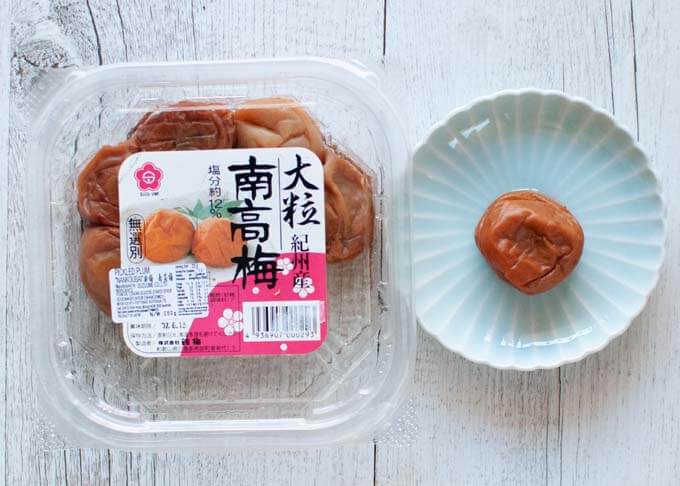 Because of the strong acidity and saltiness, I can tell you from my experience that you can eat quite a large amount of rice with just one umeboshi. A large Onigiri (Japanese Rice Ball) with an umeboshi as a filling is a classic case of it.

What’s in my Hinomaru Bento with Saikyo Yaki Fish

I was lucky to have found a fatty halibut from the local fish shop.  As I mentioned in my post Saikyo Yaki Fish, I cannot buy fresh black cod but this frozen halibut was pretty close.

As explained in the earlier section, Hinomaru Bento consists of just rice and an umeboshi. 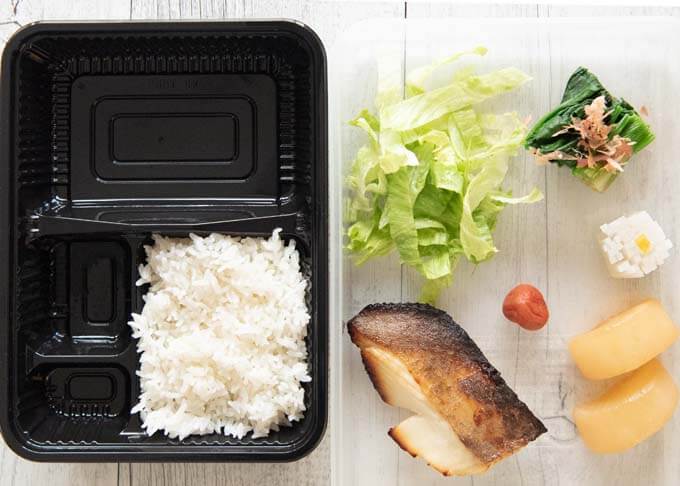 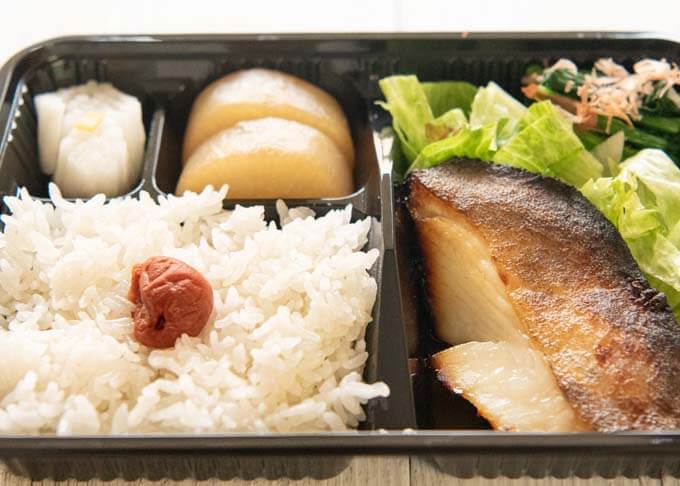 I used a plastic bento box that you often get from Japanese take away bento shops. The box is partitioned into sections for rice, main dish, and side dishes. If you are using a bento box without partitions, don’t worry. You can use okazu cups to place the dishes to avoid mixing two dishes.

If you are a big rice eater, you can fill rice in the largest compartment with the rice. You may need to squeeze the spinach, lettuce, and fish into a smaller compartment, but I think you can fit them in. 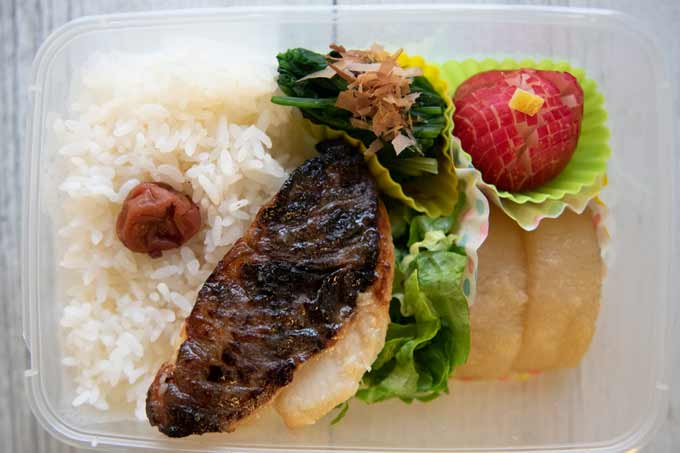 If your bento box does not have partitions for Daikon Fukumeni and Pickled Chrysanthemum Turnip, put each of them in an okazu cup, then place them in the lunch box. See the photo above as an example of packing bento in a take away plastic box without partitions.

In general, you put the dishes that contain liquid, or food with strong flavour, in okazu cups so that the flavour of other dishes does not get mixed up or spoil the food next to it. 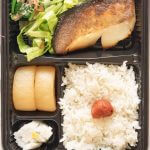 Because bento is usually made mostly from left-over dishes or make-ahead dishes, the time indicated in this recipe only shows the time to pack the bento box and the minimum cooking time that is required before packing.

1. It is best to pack the cooked rice in a bento box while hot or warm as it is easier to shape the rice into the bento box.

2. There are different kinds of umeboshi sold at Japanese/Asian grocery stores. You can use any of them. If you don’t like umeboshi, you can omit it but then it won’t be Hinomaru Bento!

3. My halibut fillet was about 150g / 5.3oz. You can use one of the other fish fillet that are recommended in my post Saikyo Yaki Fish. You will need a few days to get the fish marinated. You can also use frozen Saikyo Miso marinated fish.

4. The recipe card in my post Pickled Chrysanthemum Radish explains how to make it with a turnip.

5. If you don't have a large bento box with partitions, you can still pack bento using okazu cups to separate the dishes. Please see the sample photo of packing a bento in a plastic take away container in the post.

6. I used a plastic bento box that you often get from Japanese take away bento shops. The box is partitioned into sections for rice, main dish, and side dishes. If you are using a bento box without partitions, you can use okazu cups to place the dishes to avoid getting two different flavours mixed up.