Simply marinating salmon with mirin (味醂), soy sauce and sugar will transform the salmon to a different level. All you need is time to marinate it. Salmon mirin-zuke (味醂漬け) is delicious even when it’s cold. 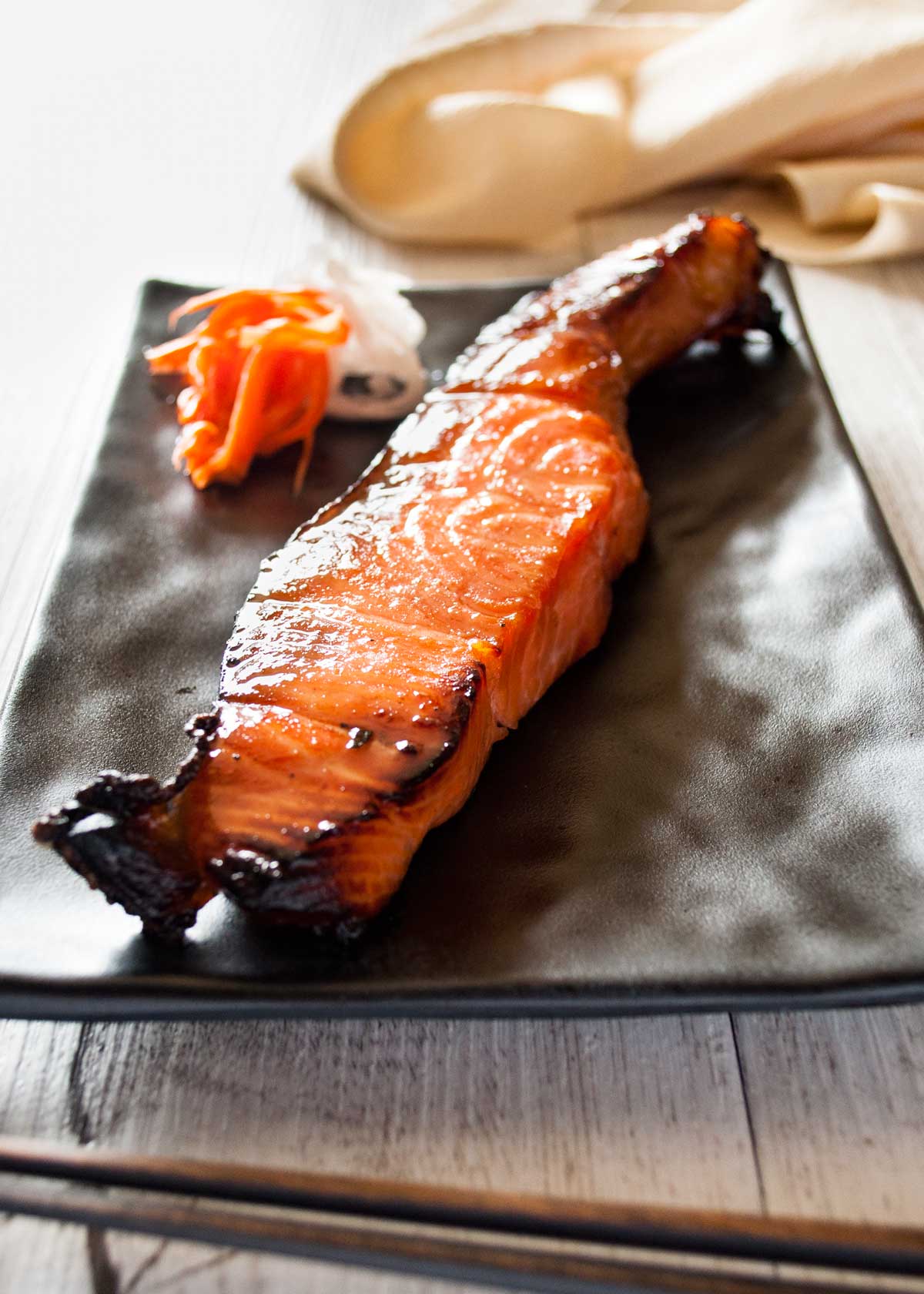 As you know, Japanese people eat quite a lot of fish which, according to recent studies, contributes to the secret behind their long life expectancy. I love fish very much. I think that I became fonder of fish as I got older. Perhaps, the body demands it? So I frequently go to the fish shop near my home in search of good fish.

When fresh fish is sold at a good price, I buy 2 or 3 times more than I need so that I can preserve the extra fish in marinade or by drying them. In fact, at this very moment, while I am writing this post, I have 6 fish fillets in two different marinades.

Unlike in Japan, you find very little variety of marinated fish or dried fish sold in Sydney. They are sold frozen at Japanese grocery stores and very expensive. So making marinated fish at home works well for me and it is so easy. I sometimes dry fish as well. I am hoping that I can introduce ‘how to dry fish the Japanese way’ some time in future.

There are quite a few different kinds of marinades used for fish but typical marinades are based on miso (味噌), saikyo miso (西京味噌, sweet miso originated in Kyoto), sake kasu (酒粕, sake lees), and mirin. You will need to marinate the fish at least over night, and sometimes 2-3 days. Making the marinade is very simple. The only down side of the marinated fish is the time factor as you have to plan ahead of time to be ready for dinner. 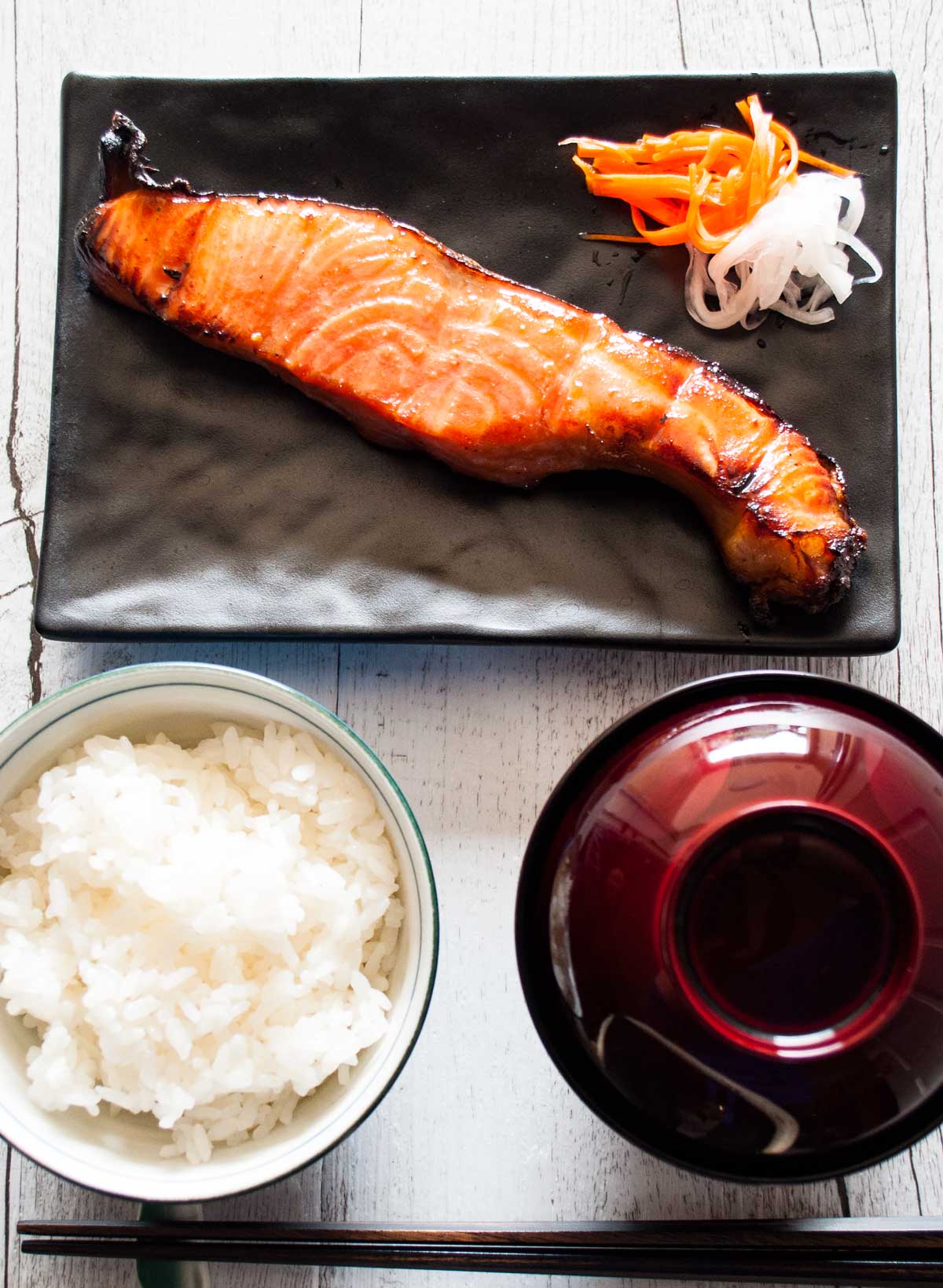 It might be hard to recognize from the photos but I used salmon cutlet (steak), not salmon fillet, because it will make the fish look closest to what you get in Japan which makes the dish more authentic. Also, the salmon cutlets marinate better than salmon fillets.

The cutlet is the cut where the fish is chopped perpendicular to the spine. See salmon cutlet picture below. It comes with bones in the middle unlike fillet. 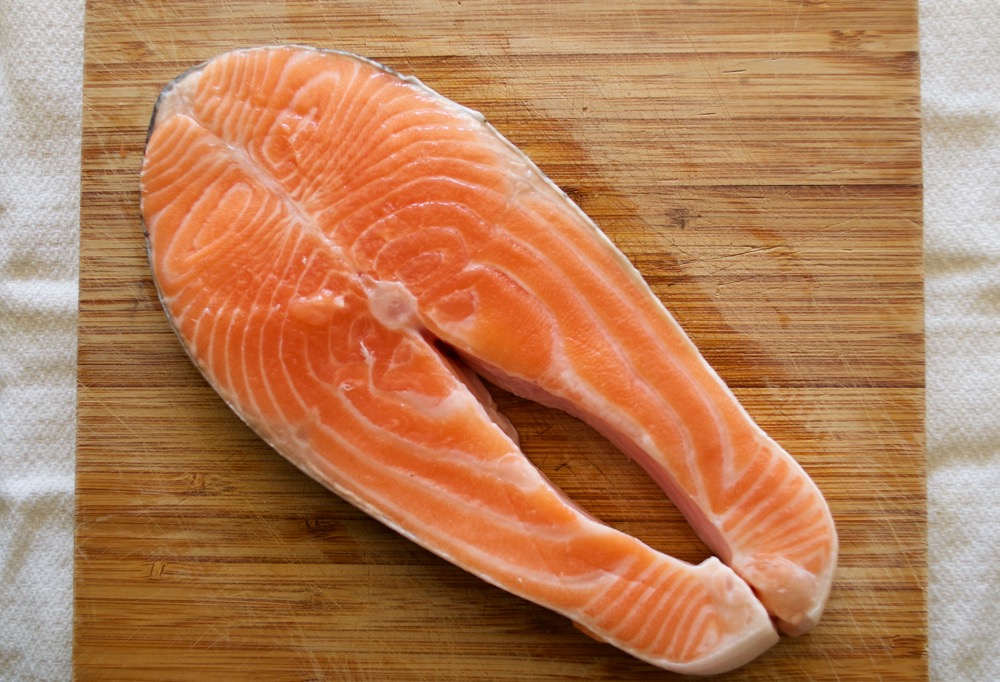 I make two fillets from the cutlet by removing the bone in the middle (see the photo below). Starting from the top (the dorsal side), cut the flesh along the spinal bone, towards the belly.

You then need to remove the tiny bones embedded in the flesh. These bones are where the red circle is on the photo below. You can see the white dots on the orange surface which are the end of the bones. Use tweezers to remove them one by one.  These bones are embedded in the flesh diagonally. Pull the bone in the same diagonal direction so the removal is easier and the flesh does not get damaged. 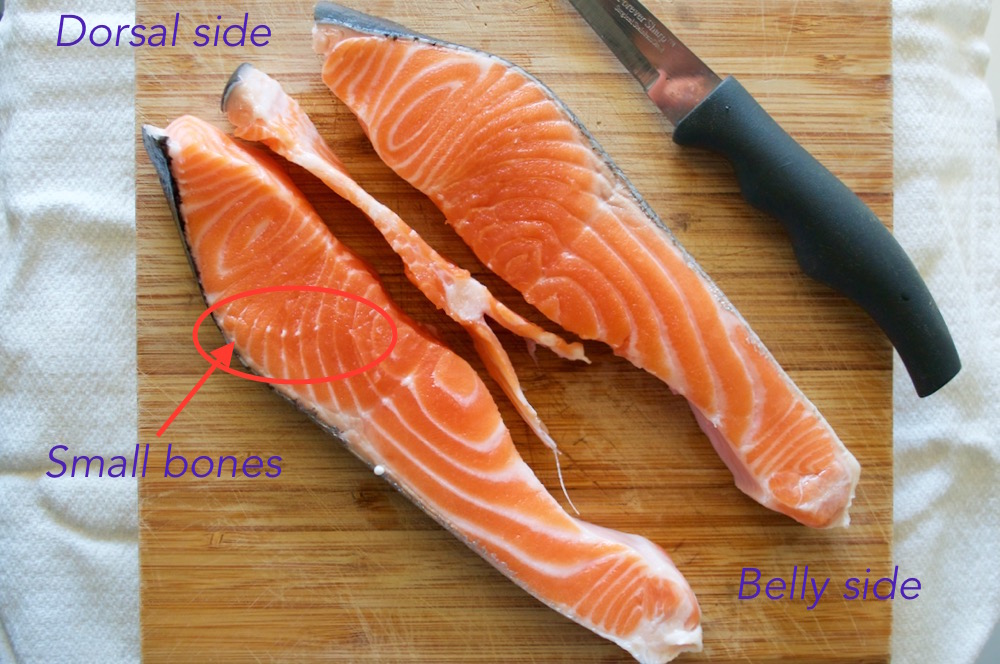 Japanese people are used to eating fish with bones in it (as they can remove even a tiny bone with chopsticks, I guess). It is not considered to be poor cooking etiquette like in Western culture, so I sometimes do not bother removing the bones. However, if you are serving the fish in fillet form, it is better to remove the bones so that your guest does not have to remove them when eating.

If you choose to use salmon fillets, you could slice the fillets into about a 1.5cm thickness but you might find that each fillet is rather small.

Marinating is pretty simple, just mix the marinade ingredients together and put the mixture in a zip lock bag together with the salmon. You could marinate the salmon in a container, in which case, you may need to turn the fish over occasionally so that both sides of the fish fillet are well marinated. Today’s salmon mirin-zuke needs to be marinated at least overnight, though 2 nights is preferable. 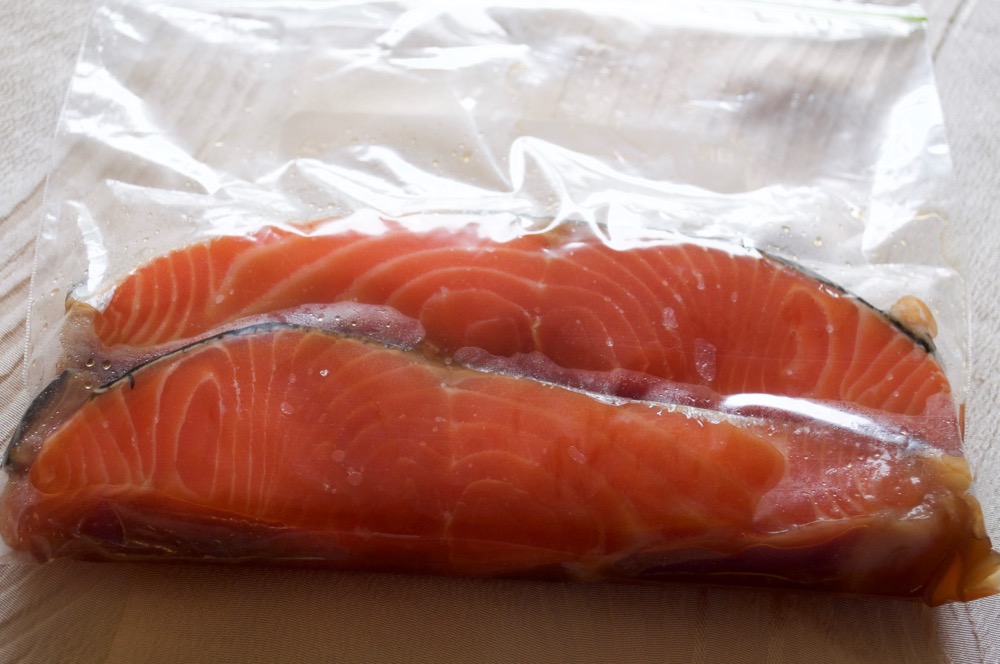 Because the fish is marinated with sweet mirin, it gets burnt easily if you cook the fish over a strong heat. In the case of oven grilling (heater at the top), place the fish on the second closest shelf to the heat. I use the oven grill but you can grill the fish on a BBQ or a cooktop. In the case of the BBQ or cooktop, use a medium heat.

I have a little Japanese fish griller (see the photo below) which I always use when grilling small whole fish or fillets. It comes with a metal tray with slits and a holder to secure the fish which goes over the tray. The grill holder can lock onto the tray so that you can lift the grill holder with or without the tray. 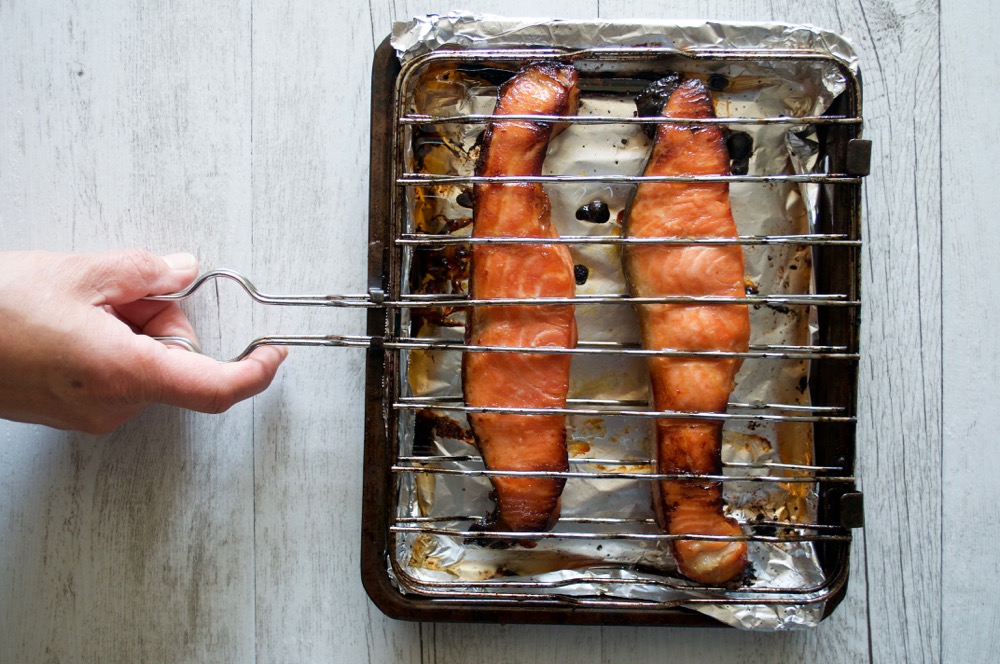 The fish griller is meant to be used over a cooktop so that the heat from the cooktop gets filtered through the slits of the tray and the fish gets cooked with gentle heat without burning it too quickly. But I hardly use it this way as the oil and juice from the fish drops onto the cook top and the cooktop becomes dirty and smells fishy.

Instead, I place two layers of foil on the tray, place the holder with fish on it and stick it under the oven grill (broiler). When the fish is cooked half way, you unlock the holder and turn it over to cook the other side. Most times I don’t need to wash the tray after use as the foil catches the oil and juice dropped from the fish!

You might be able to buy this kind of fish griller at a Japanese grocery store.

I find that salmon in Sydney contains a lot of fat compare to  that of Japan. So I thought adding a vinegar based garnish would match with this grilled salmon. This simple garnish is called kohaku-namasu (紅白なます, red and white salad).

In Japanese culture, red and white are good luck colours. You will find these two colours used in weddings and births. Kohaku-namasu is one of the ‘must have’ dishes in Osechi-ryori (おせち料理, special dishes prepared for the New Year) for the obvious reason.

You can simply marinate julienned daikon (大根, white reddish) and carrots in sweet vinegar called amazu (甘酢). Please visit the recipe for amazu here. I presented the garnish separating red and white. This is not the traditional presentation of kohaku-namasu. Julienned daikon and carrots are usually mixed and marinated. 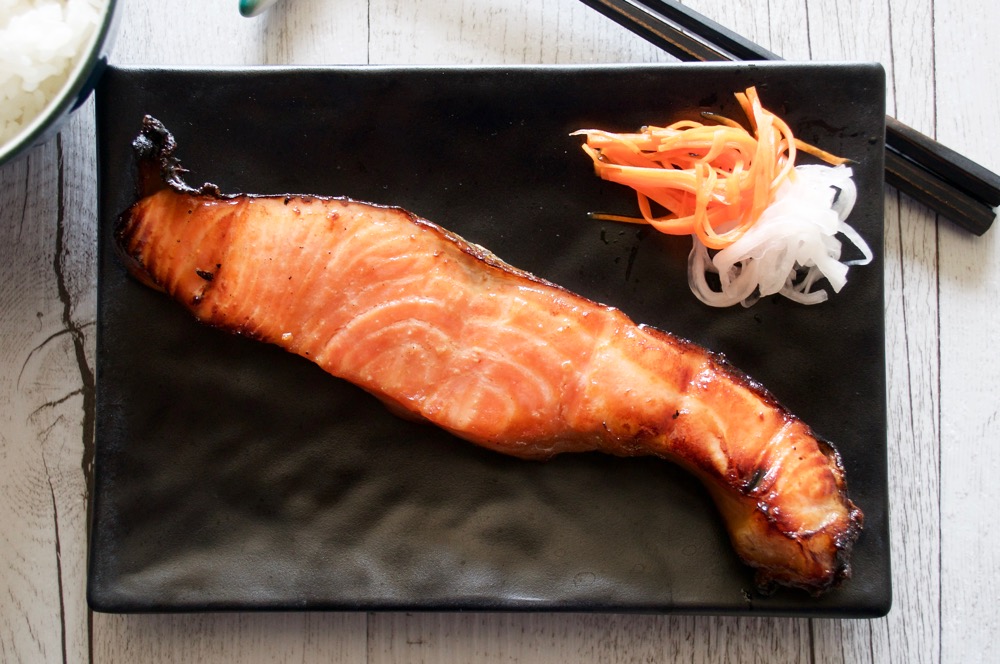 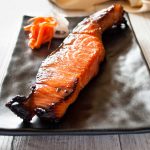 Salmon mirin-zuke is easy to make and delicious even when it’s cold. Simply marinating salmon with mirin, soy sauce and sugar will transform the salmon to a new level. All you need is time to marinate. The preparation time does not include the time to marinate which is 1-2 nights.

1. By removing the back bone, you make two salmon fillets from one cutlet. You could use salmon fillets and slice it into 1.5cm (⅝") thickness, but you might find each fillet a bit small and you may need to serve two fillets per person. If you use a salmon fillet without thinly slicing it, the marinade flavour may not penetrate into the thickest part of the flesh very much.

2. Tiny bones are embedded in the upper body of the salmon, and on both sides of the spinal bone. Run your finger over the flesh to feel the pointy end of each bone to locate them. The bones are embedded diagonally so remove them in the same diagonal direction. Removing them against the direction will make it harder to remove the bones, and it will also damage the flesh.

4. Salmon Mirin-zuke goes well with rice. It is suitable for lunchboxes as it is great even when served cold.