Spaghetti Napolitan (Japanese Ketchup Pasta) is one of the popular yōshoku (Western-style food) dishes. The uniqueness of this pasta is the sauce that is based on ketchup/tomato sauce (Aussie), making the colour of the pasta almost red.  It is a simple pasta dish but very tasty. 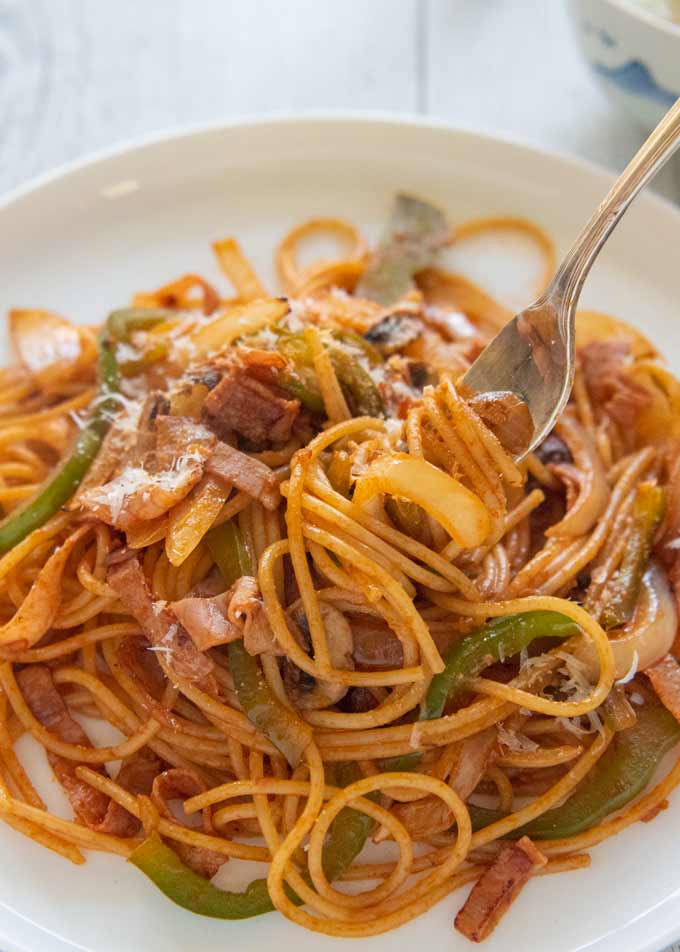 Apparently, the chef at Hotel New Grand in Yokohama invented the dish soon after WWII. Hotel New Grand was used as accommodation by American troops during the Occupation of Japan, for 7 years from 1945.

The chef watched how the American soldiers were eating pasta by simply adding ketchup to it and nothing else. He thought it was too plain as a dish so he added all the ingredients to the pasta that resembles today’s Spaghetti Napolitan. The name of the dish came from the Italian dish, Spaghetti Napolitana due to its similarity.

Spaghetti Napolitan is widespread among young and old, so much so that if people hear the word ‘Napolitan’ (ナポリタン), everyone knows that it is a Japanese Ketchup Pasta. 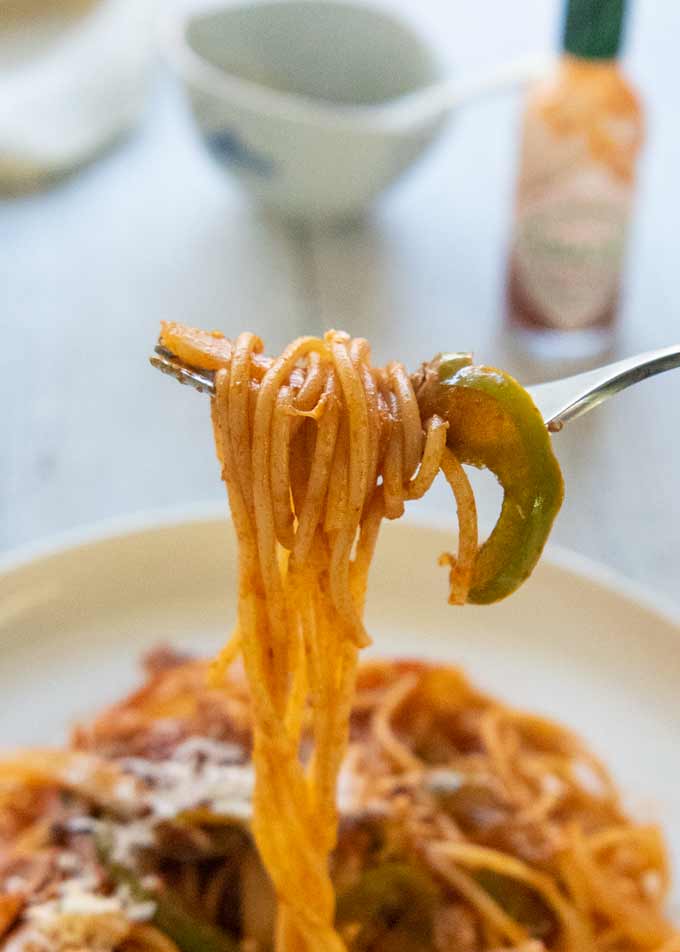 The original Spaghetti Napolitan served at restaurants was more authentic than what you are served at yōshoku restaurants in Japan these days.

To start with, the pasta was cooked the day before and to beyond al-dente, i.e. fully cooked to almost like soft noodles. Oil was sprinkled to prevent the pasta from drying up and kept in the fridge overnight. Then when an order came through, the pasta was reheated by stir-frying it with the vegetables, ham and sauce.

Basically, the method of cooking Spaghetti Napolitan at the time was conceptually similar to the noodle soups served at stand-and-eat noodle shops. Pre-cooked noodles are ready; toppings and broth are ready; warm up the noodles in boiling water; drain and transfer to a serving bowl; add the soup and toppings. 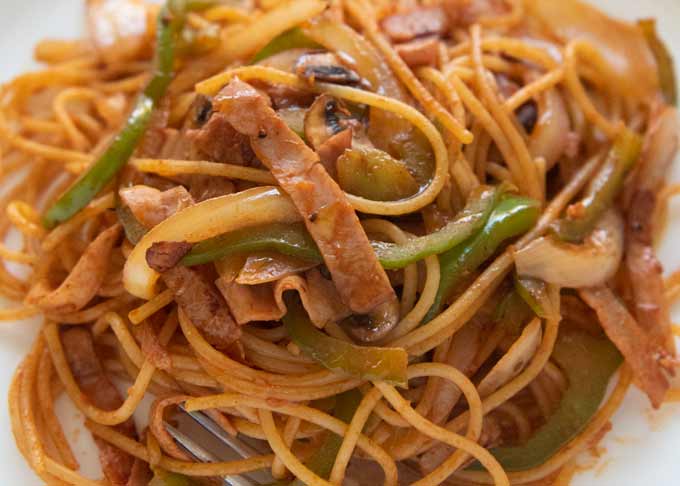 Some people apparently still prefer overcooked pasta to bring back memories of the good old days.

When my children were still little, I sometimes cooked Spaghetti Napolitan. I think that the pasta was close to the nostalgic version. My son still remembers that my pasta was beyond al dente and not saucy. I have improved my Neapolitan since then and I think my Napolitan is quite good.

What’s in my Spaghetti Napolitan

The list of pasta ingredients is pretty much the same among most of the Napolitan recipes: 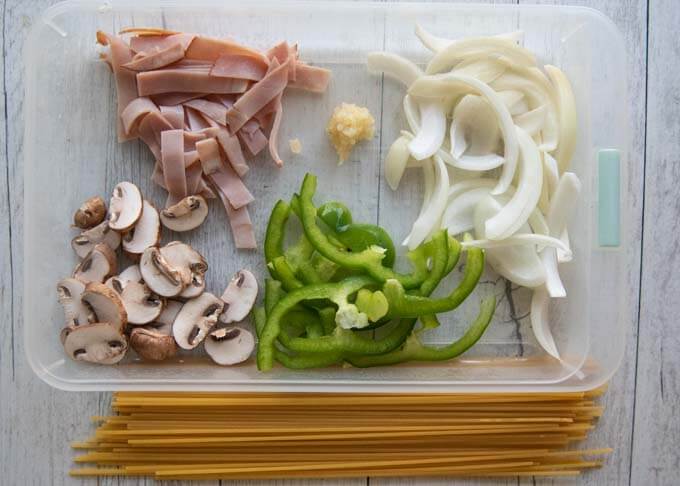 Instead of ham, you can use bacon or sliced sausages (not raw). If you omit ham/bacon/sausage, you can make it vegetarian. 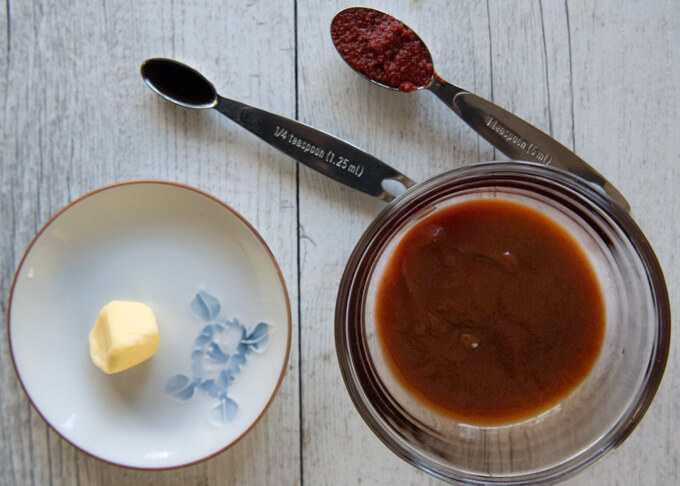 How to make it

Cooking Napolitan is very easy and fast. In fact, cooking the pasta takes the longest time. 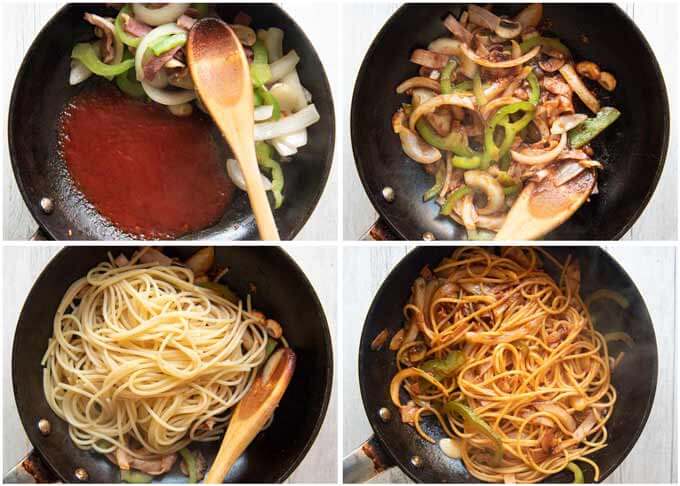 Although my recipe instructions for cooking pasta and other ingredients are synchronous processes, you can start cooking the vegetables and get the Napolitan sauce ready while cooking the pasta. Then you can get Spaghetti Napolitan ready in one minute after the pasta is ready!

As far as I remember, Spaghetti Napolitan has always been served with a bottle of Tabasco and grated parmesan cheese. 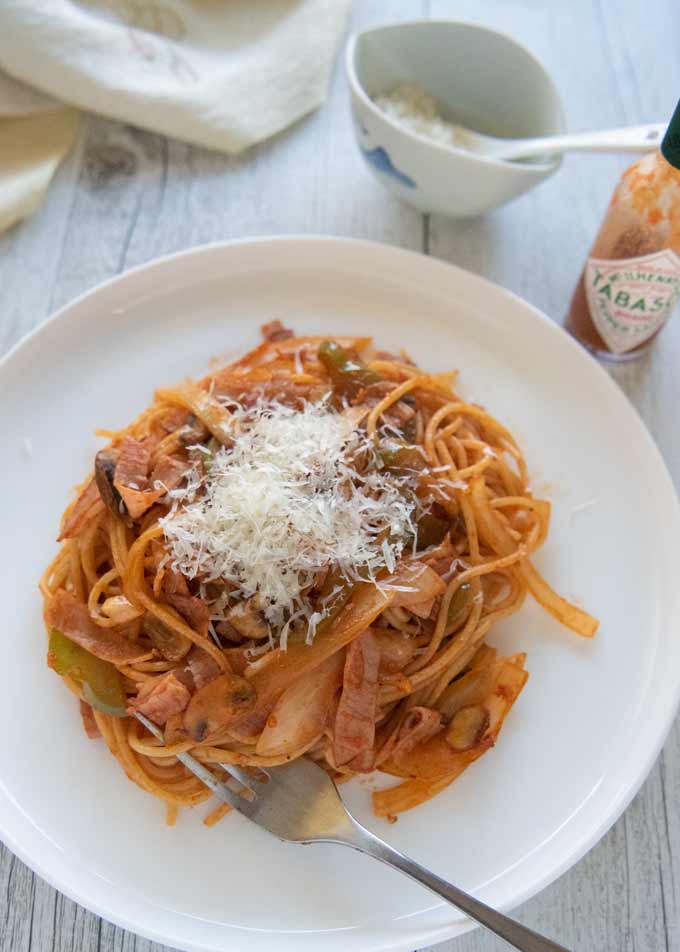 Given that the origin of this dish is associated with the US, I can easily understand the inclusion of Tabasco as a topping. I think that tomato flavour goes very well with Tabasco. By adding a few dashes of Tabasco to the dish, the sweetness of the sauce that comes from tomato ketchup becomes somewhat milder.

I read in an article that there are rules as to what kind of pasta dishes should have cheese added and what kind shouldn’t. I don’t know if Japanese Ketchup Pasta should or shouldn’t have cheese by Italian standard. Well, this dish does not exist in Italy anyway so let’s sprinkle on some cheese!

Spaghetti Napolitan (Japanese Ketchup Pasta) can be a great bento food as it reheats well. It is also suitable as a side dish to be packed in a bento box. Imagine the colour! 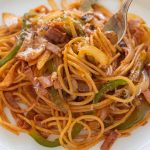 Spaghetti Napolitan is one of the popular yōshoku (Western food) dishes. The uniqueness of this pasta is the sauce, which is based on ketchup/tomato sauce (Aussie), making the colour of the pasta almost red. It is a simple pasta dish but very tasty.

Omit the protein to make it vegetarian!

Cook Time = time to cook my Spaghetti (n.7) + 1 minute to mix pasta with the sauce. This is because I started making the sauce while cooking pasta.

2. Unlike standard pasta dish, I didn’t use olive oil because I wanted the pasta just like how it was made in Japan when I was in Japan. But if you wish, use olive oil instead.

If your capsicum is like Japanese capsicum, which is about 5-6cm / 2-2⅜" long with very thin and soft flesh, you should slice it to 7mm / ¼" wide strips.

4. Instead of ham, you can use bacon strips or thinly sliced sausages (not the raw meat sausages).

5. This is to remove the acidity of the tomato sauce/ketchup.

6. Nutrition per serving, not including toppings.

Since today’s main is yōshoku (Western-style food), I tried to choose the dishes that are not too authentically Japanese. I realise the collection of my recipes are mostly authentic, but I think the dishes I picked today go well with the pasta dish.

Spaghetti Napolitan does not contain a lot of protein, so I picked oysters as a starter. I felt that two sides and a soup would be sufficient to accompany the pasta dish. So I picked a dessert to fill the 5th panel but it’s optional. 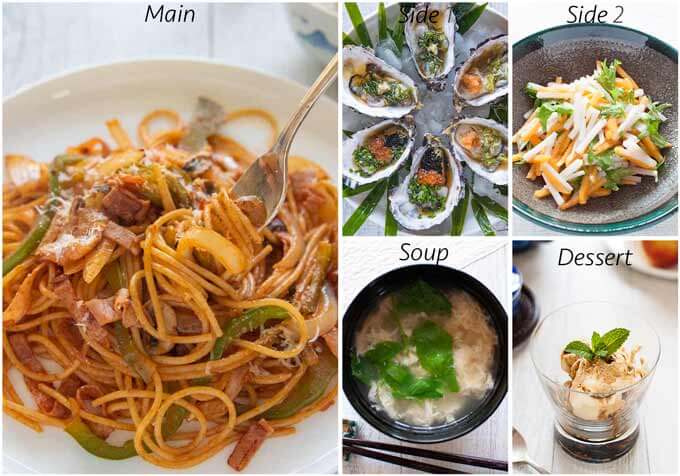