The Japanese version of steamed dumpling, shumai (シュウマイor 焼売), also called shao mai, is quite easy to make. See the video below the recipe to believe it. It tastes like the ones you get at restaurants and is certainly much better than the frozen shumai you can buy at Asian grocery stores. It only contains pork mince, onion and few typical Japanese seasonings, but it tastes so good. 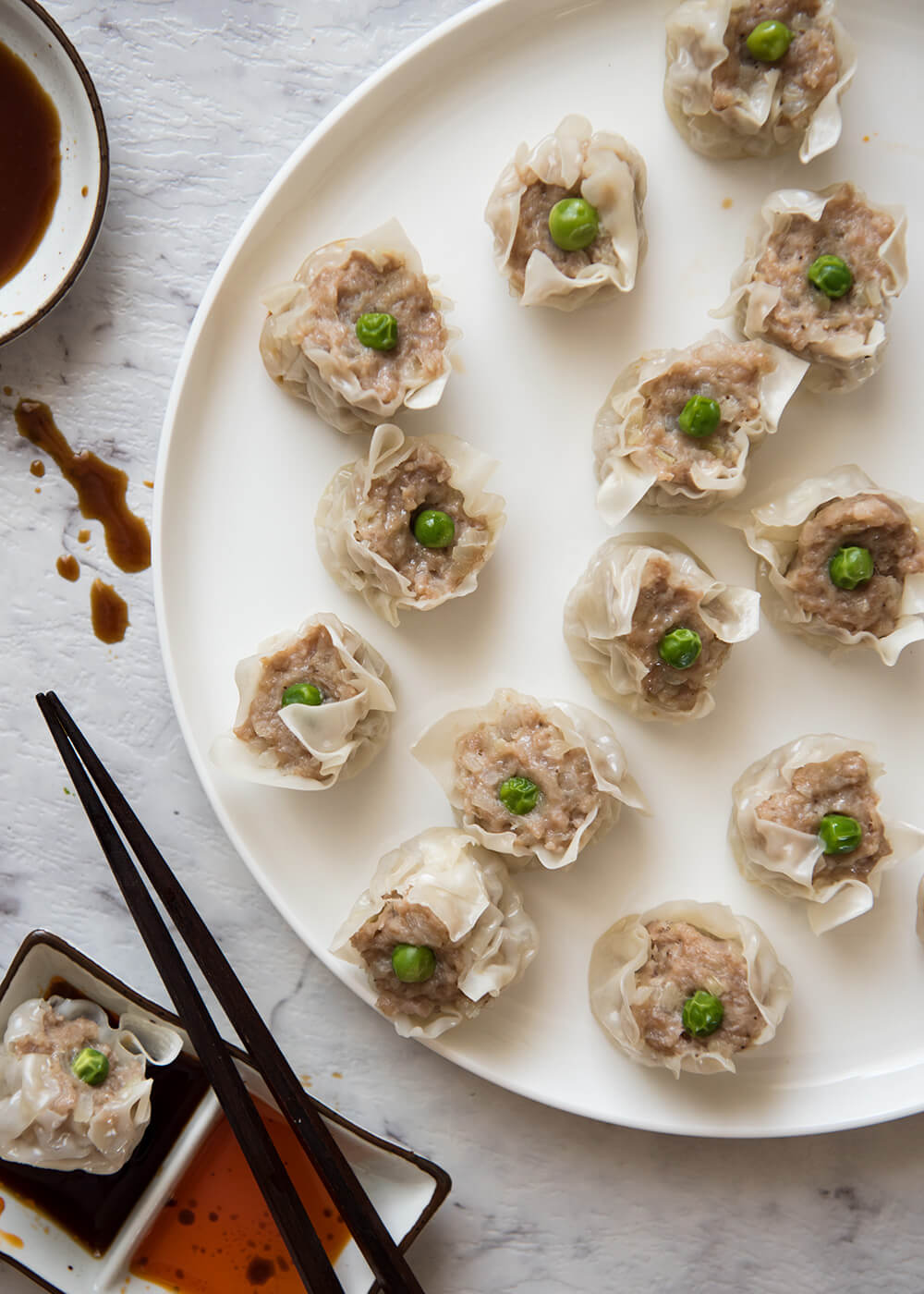 Japanese took on quite few Chinese dishes and converted them to Japanese tastes. Some dishes transformed so much that they became the Japanese dishes with very little resemblance to the original Chinese dishes. The most iconic dish of those is “ramen” (ラーメン), I must say. It originated from Chinese noodles but now ramen = Japan.

Nagi posted Gyoza last year in January. Gyoza was also from China. It was my recipe and I wanted to include it on this blog site, RecipeTin Japan, but Nagi simply could not wait for me to launch my blog.

Well, Nagi has been impatient since she was a little kid. She was always the one who asked me, “Are we there yet?”, 10 minutes after we left home to go on a couple of hours’ road trip to the north coast of NSW. She was right this time, though. My blog was launched 7 months after her gyoza post and there is no way Nagi could wait for so long.

Shumai (シュウマイor 焼売) is also a dish that came from China and was modified to suit the Japanese palate. It still looks like the Chinese shumai you get at restaurants but the flavour is somewhat different.  Japanese shumai is made with just pork mince (ground pork), unlike Chinese shumai which is usually made with mixture of prawns (shrimps) and pork.

Shumai is equally as simple as gyoza to make in my repertoire and my family love it. Like gyoza, it looks fiddly but once you know how to wrap the meat and shape it, it’s quite simple to make. So, I am posting my shumai recipe today with a video! 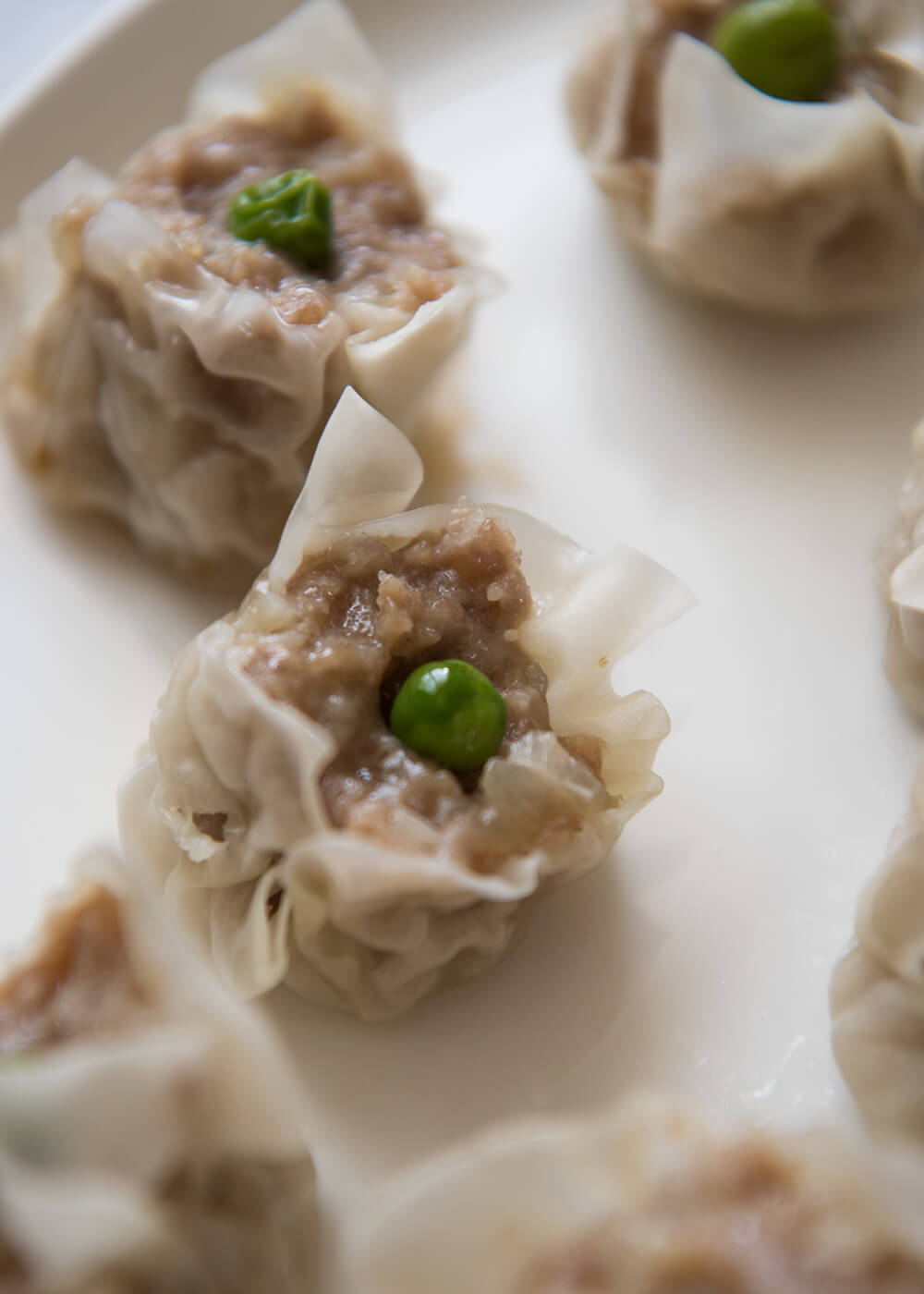 My shumai uses pork mince (ground pork) and finely chopped onion, which is typical of the Japanese shumai. Sometimes, I add finely chopped rehydrated shiitake mushrooms for an extra texture and flavour. At the centre of each shumai, I place a green pea for a colour but this is optional.

Shumai wrapping sheets are different from those used in gyoza and you can buy them from Japanese and Asian grocery stores. They are much thinner and usually square. There are white wrapping sheets and yellowish wrapping sheets but the Japanese version of shumai always uses very thin white sheets (top left photo below) and sold as “shumai sheets”.

I once made shumai using the thinest yellowish Chinese wonton sheets (top right and bottom left photos below). The thickness of the skin was similar to the Japanese shumai sheets but they were larger squares. They came out alright but just looked different because of the colour of the skin and the texture was slightly different, too.

In Sydney, you can also find white Chinese wonton sheets (bottom right photo below) at Asian grocery stores and perhaps even at super markets. They are also larger square than Japanese sheets and much thicker. You can compare the number of sheets and weight in a pack to work out how thick the white sheets are. If you could find thinner one like those yellowish sheets in the photo below, that would be the best. But even if you made it with the thicker sheets, it wills till tastes great. 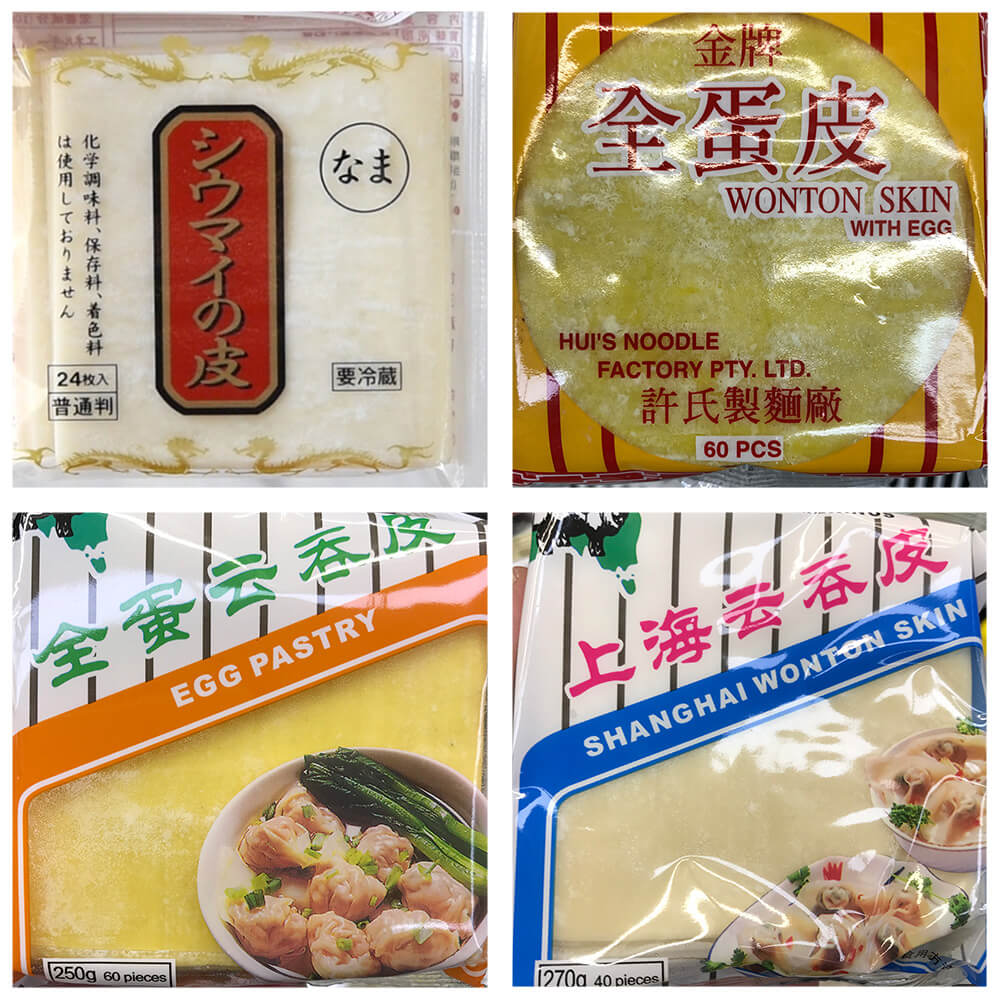 Whenever I make shumai, or gyoza for that matter, I try to use up the meat mixture and the wrapping sheets in a pack without leaving either meat or sheets. This is a kind of culinary excellence, I must say (no?). It is quite hard to just finish the meat and all the wrapping sheets. Normally, you either run out of meat with few sheets left over or have too much meat left without any more wrapping sheets.

When I made shumai for this post, I went to Nagi’s place and made them there as Nagi helped me to make a video. Nagi was ready to film the action of me wrapping a shumai. But before I started wrapping, I tried to draw a few lines crossing in the centre on the surface of the meat mixture in the bowl to divide it into 8 pieces (like a pizza) so that I could take a third of a piece to make one shumai. This would allow me to use up 24 shumai sheets in a pack without leaving any meat or sheets unused.

But alas, Nagi’s impatience surfaced and she said, “Mum, what are you doing? I am waiting for you to start wrapping.” I told her that I tried to measure 1/24 of the meat mixture to avoid any leftovers. She just rolled her eyes and hurried me to get on with the job. So, I miserably failed to use up all the meat mixture this time and I had to make two small meat balls without a wrapping.

When I perfectly use up both meat and the wrapping sheets, I feel really great and always end up whispering a big “yes!” .

I use a Chinese bamboo steamer to steam the shumai. To avoid the bottom of the shumai from sticking to the bamboo, I place baking paper cut into a circle with many holes in it so the steam can come out (see the video). You can buy steamer sheets from some Asian grocery stores but I could not find paper as large as my steamer. 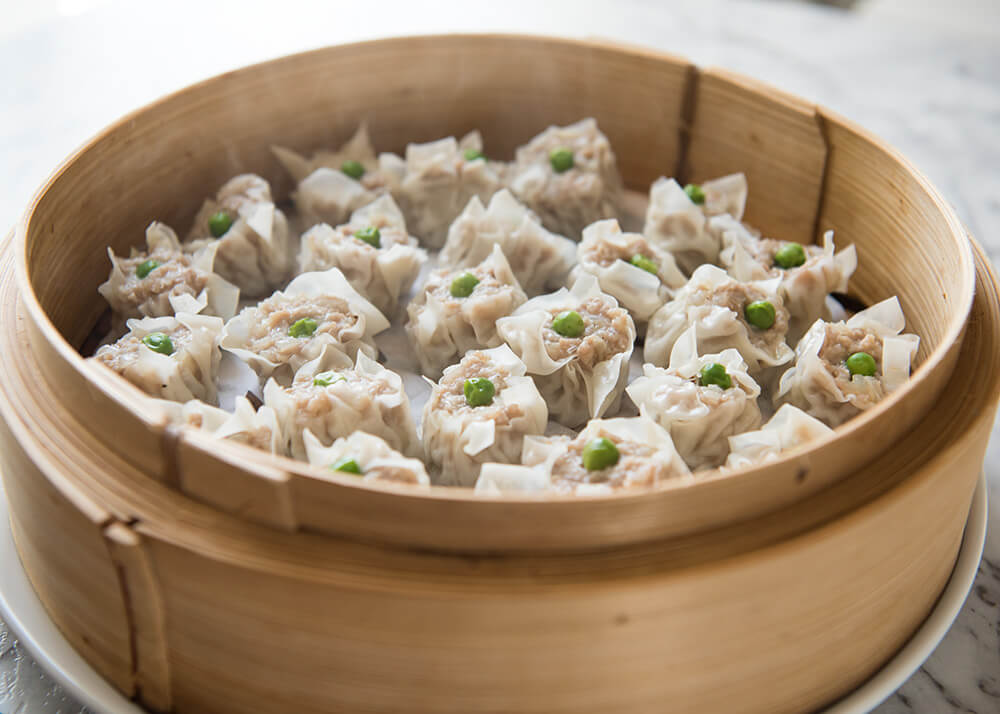 You can of course use a conventional steamer if you have one. If you don’t have a steamer, you can use a large pot and a plate which can just fit in the pot. Fill the pot with water, about 2-3cm high, and place the plate on either 3 small ramekins or 3 balls of the same size made by scrunching aluminium. You will find more details of steaming without a steamer in my post, Sakamushi Fish (Steamed Fish in Sake). 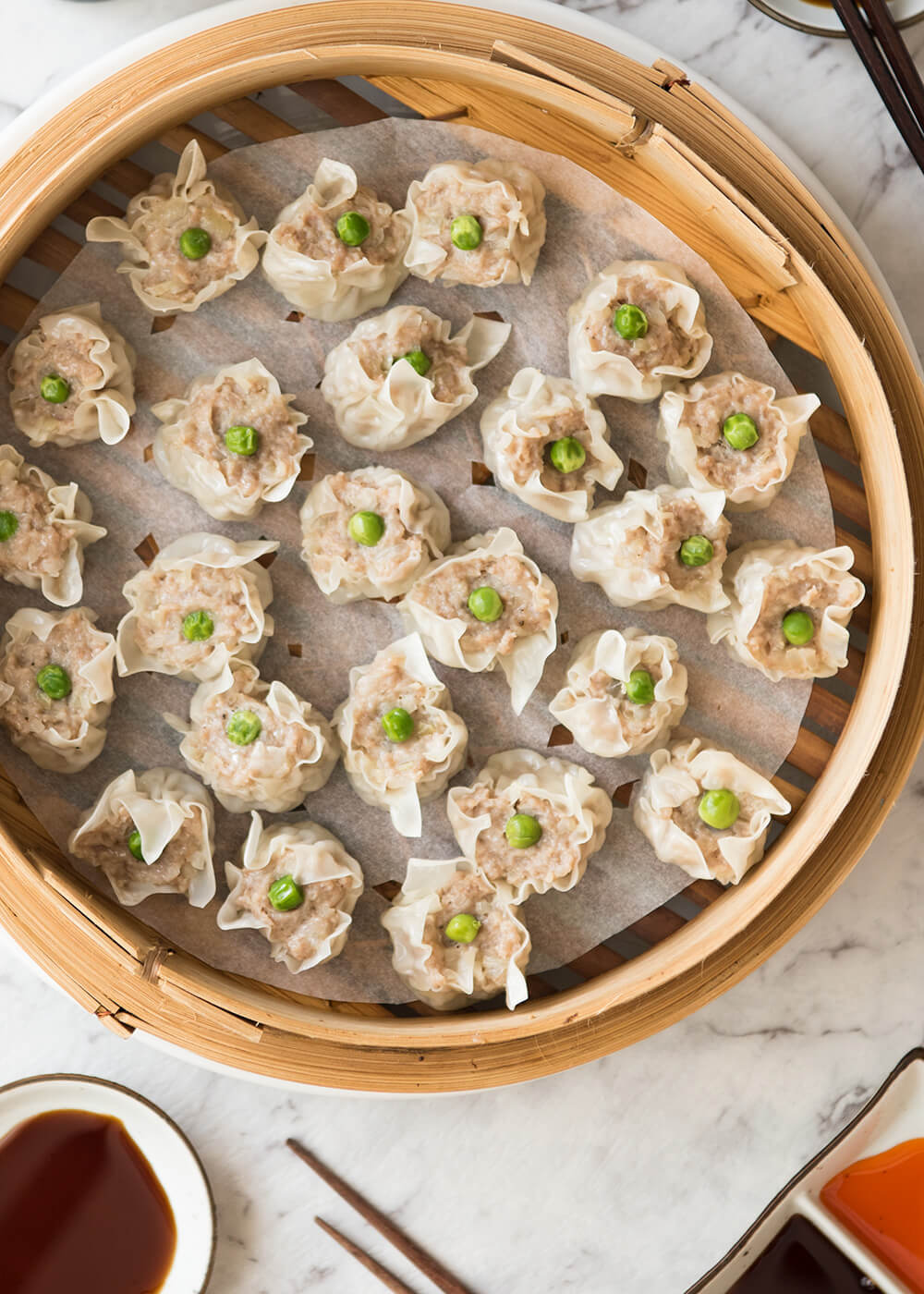 It is best to eat shumai while steam is coming out of them. My shumai photo did not show it but Japanese shumai is usually served with hot mustard. I don’t know why but mustard goes well with shumai. The typical Japanese way of eating shumai is to put a little bit of hot mustard on a shumai, then dip it in soy sauce with/without vinegar.

But the shumai itself has good flavour so I usually don’t use soy sauce. Nagi likes eating shumai just like gyoza, i.e. soy sauce + vinegar + chilli oil. It is really up to you as to what flavour to dip it in.

I hope you try shumai. You can also freeze your shumai before or after steaming them.

Print
Shumai (or Shao Mai, Steamed Dumpling)
Prep Time
25 mins
Cook Time
10 mins
Total Time
35 mins
The Japanese version of steamed dumpling, shumai (or Shao Mai) is quite easy to make. See the video below the recipe to believe it. It tastes like the ones you get at restaurants and is certainly much better than the frozen shumai you can buy at Asian grocery stores. It only contains pork mince, onion and few typical Japanese seasonings but it tastes so good. Prep time does not include 1-2 hours of resting the meat mixture in the fridge. Cook time assumes that 2 shumai pieces are steamed at once.
Recipe Type: Main
Cuisine: Japanese
Serves: 24 pieces
Ingredients (tbsp=15ml, cup=250ml)
Wrapping
Serving
Instructions
Making Shumai (see the video)
Steaming Shumai Using a Bamboo Steamer
Steaming Shumai Using a Steamer Pan/Pot
Steaming Shumai without a Steamer (note 3)
Serving
Recipe Notes

2. To use up the meat perfectly, I draw 4 lines on the surface of the meat crossing in the centre so that it will make 8 pieces like pizza. Then roughly divide each piece into 3 equal portions. This will make 24 lots of meat.

3. For more details on how to steam without a steamer, please visit Sakamushi Fish (Steamed Fish in Sake). You will even find out how to take the steamed hot plate out of the pot without burning your fingers.

4. It is unlikely that the shumai skin at the bottom will stick to the plate but I thought it would be pretty to have a paper liner anyway.

5. You can freeze before or after steaming them. When freezing, place each shumai without touching each other. Once frozen, you can pack them closely.

Frozen shumai can be steamed without thawing. It will take 10-12 minutes.

You will see how simple it is to make shumai in this video below. Also, see how to make steaming paper liner of any size.