My Japanese-style kingfish tartare, called Kingfish Tataki, is a similar dish to fish tartare but with miso flavour. The fish is chopped much more finely than standard fish tartare. Everything is done on a cutting board with a knife, including mixing the ingredients. I bet you will feel like a master chef! 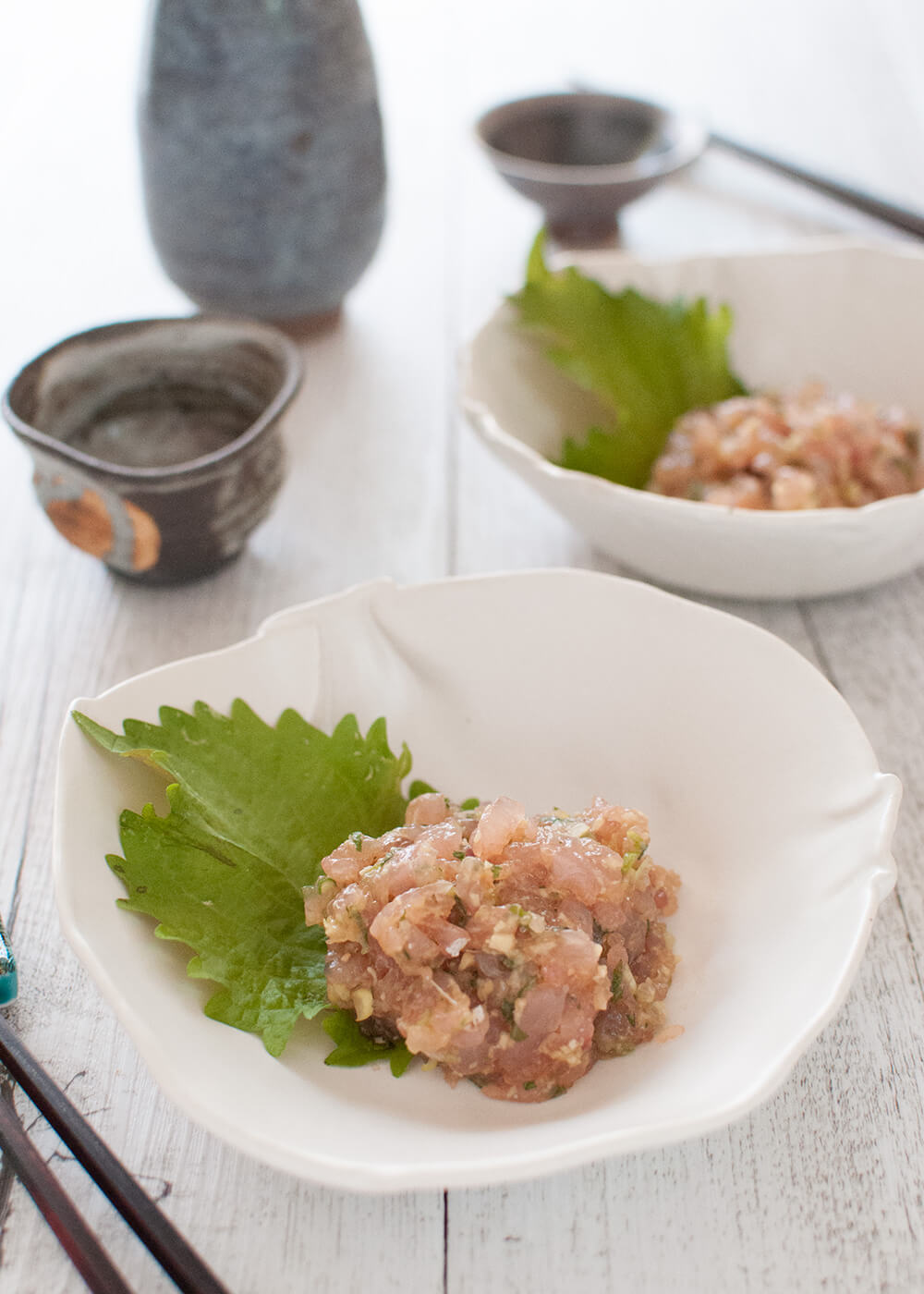 When you Google search ‘tataki fish’, you will most likely get a list of seared fish recipes, not fish tartare. This is because ‘tataki’ has two meanings in Japanese culinary terms. The word ‘tataki’ (たたき) is the noun form of ‘tataku’ (たたく or 叩く) which means to hit, pound, knock, etc.

Beef fillet can even be seared and served in a similar fashion and they call it beef tataki. 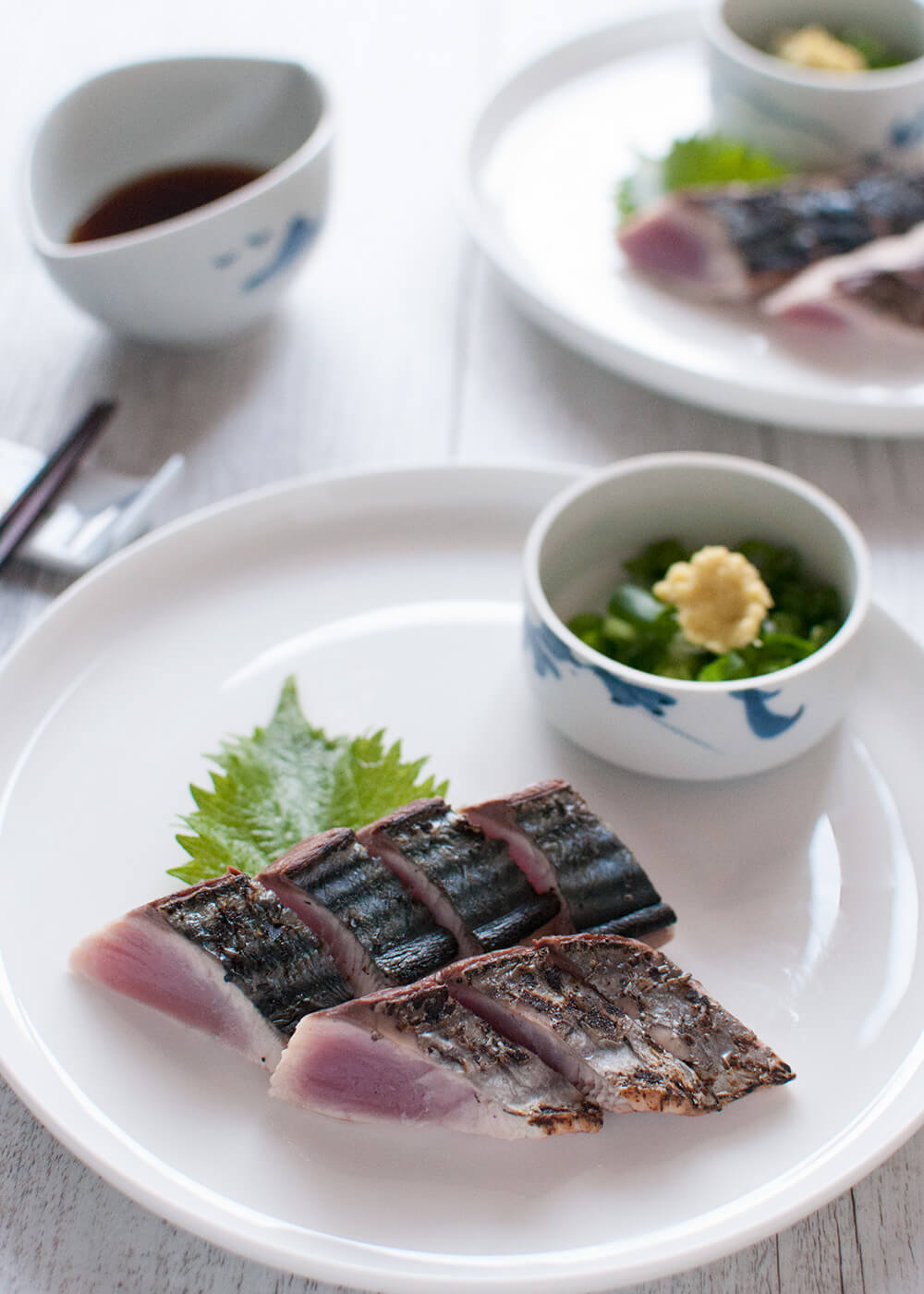 The other tataki dish – today’s recipe – is very similar to tartare. But it is made with fish instead of beef and the seasonings/mixing vegetables are also different from beef tartare. In Japan, this type of tataki dish is often made with tuna or yellowtail (horse mackerel).

In the case of tuna, the fillet is usually cut into very small pieces and then a knife is used to mince it by chopping the pile of fish pieces as if you are hitting the pile with a knife. This act led to the name of the tartare-style tataki dish. But in the case of yellowtail (horse mackerel), you often get much larger pieces of the flesh mixed with chopped shallots (scallions), ginger, etc and piled onto a plate. It’s hardly pounded but they still call it tataki. 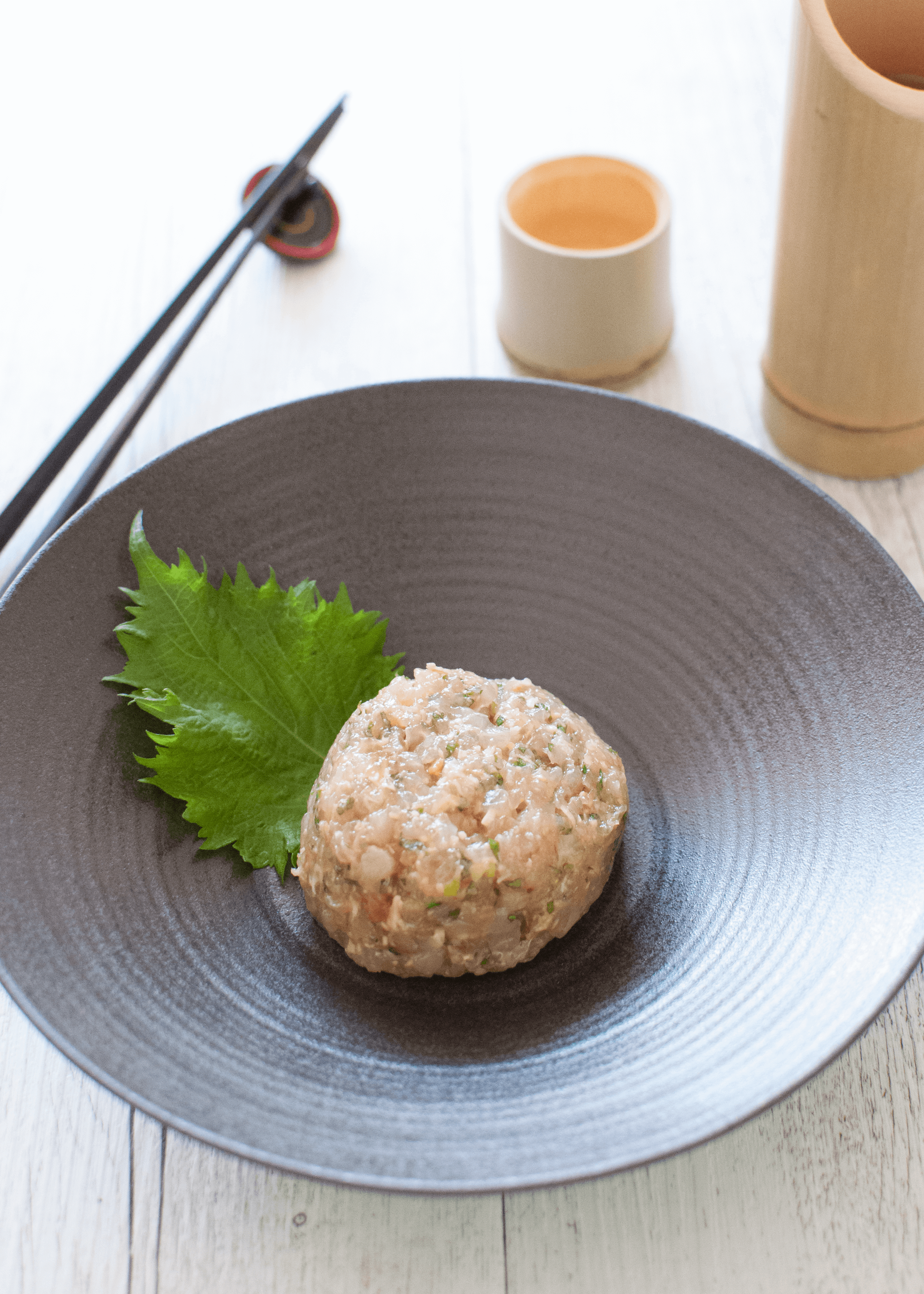 To make you more confused, tartare-style tataki is also called ‘namerō’ (なめろう) when it is seasoned with miso. Namerō is typically made with fish with bluish skin such as yellow tail (horse mackerel), mackerel and sardines.

Namerō is a local dish originated from Bōsō peninsula in Chiba prefecture. It is said that fishermen made it on their fishing boats, with minimal cooking tools. They called it ‘namerō’ because it was so tasty that people even wanted to lick the plate. The word lick is ‘nameru’ (なめる or 舐める) in Japanese.

So, today’s recipe Japanese Style King Fish Tartare is called ‘buri no namerō’ (鰤のなめろう) to be exact, but you could also call it ‘buri no tataki. ‘Buri’ (鰤) is kingfish and ‘no’ is equivalent to ‘of’. Kingfish does not have bluish skin but I think the texture and flavour of the flesh is suitable for namerō.

I chop kingfish fillets into very small pieces, then mince them with a knife. On the same cutting board, I chop ginger, shallots (scallions), and shiso leaves very finely. Add seasonings – miso, soy sauce, sesame oil – and mix them using the knife on the cutting board. 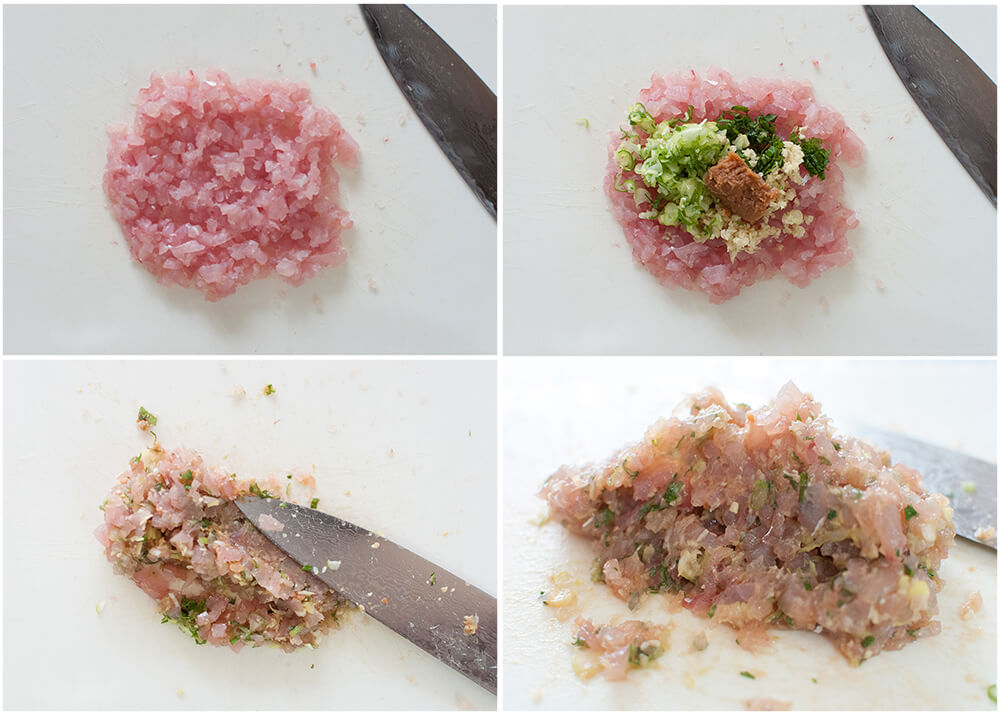 In Japan, namerō is usually served as nibbles with sake, beer or other drinks. When you take a mouthful of namerō with chopsticks and eat it between drinking sake or even wine, it tastes so good.

You will find it at eating places like Izakaya (Japanese Style Tavern). But I think it is also good to serve namero on crackers or crostino. 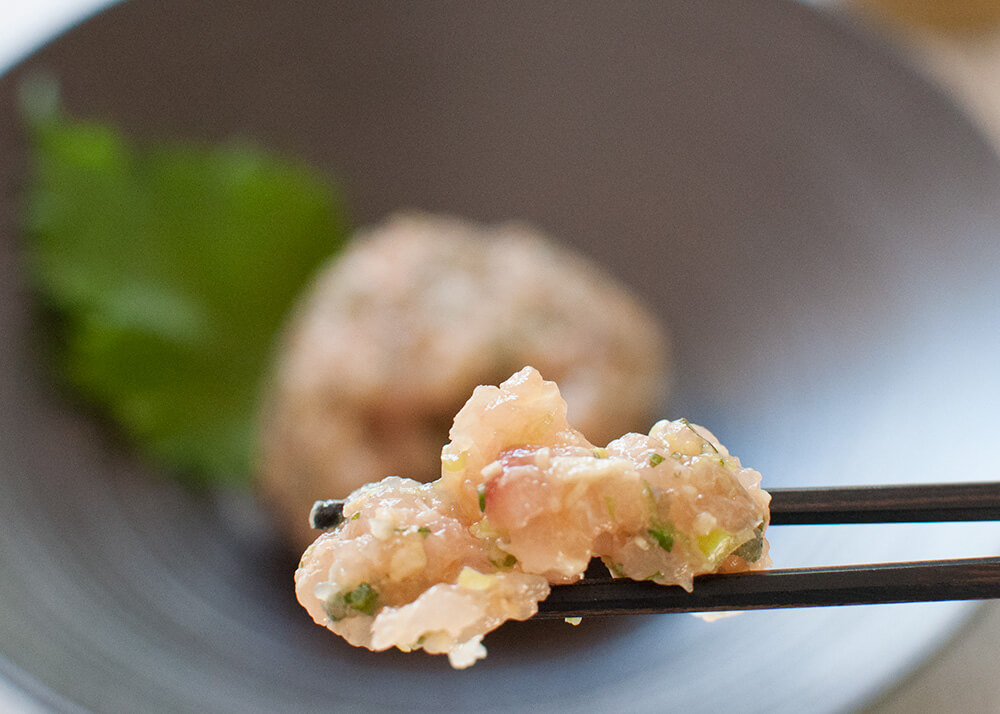 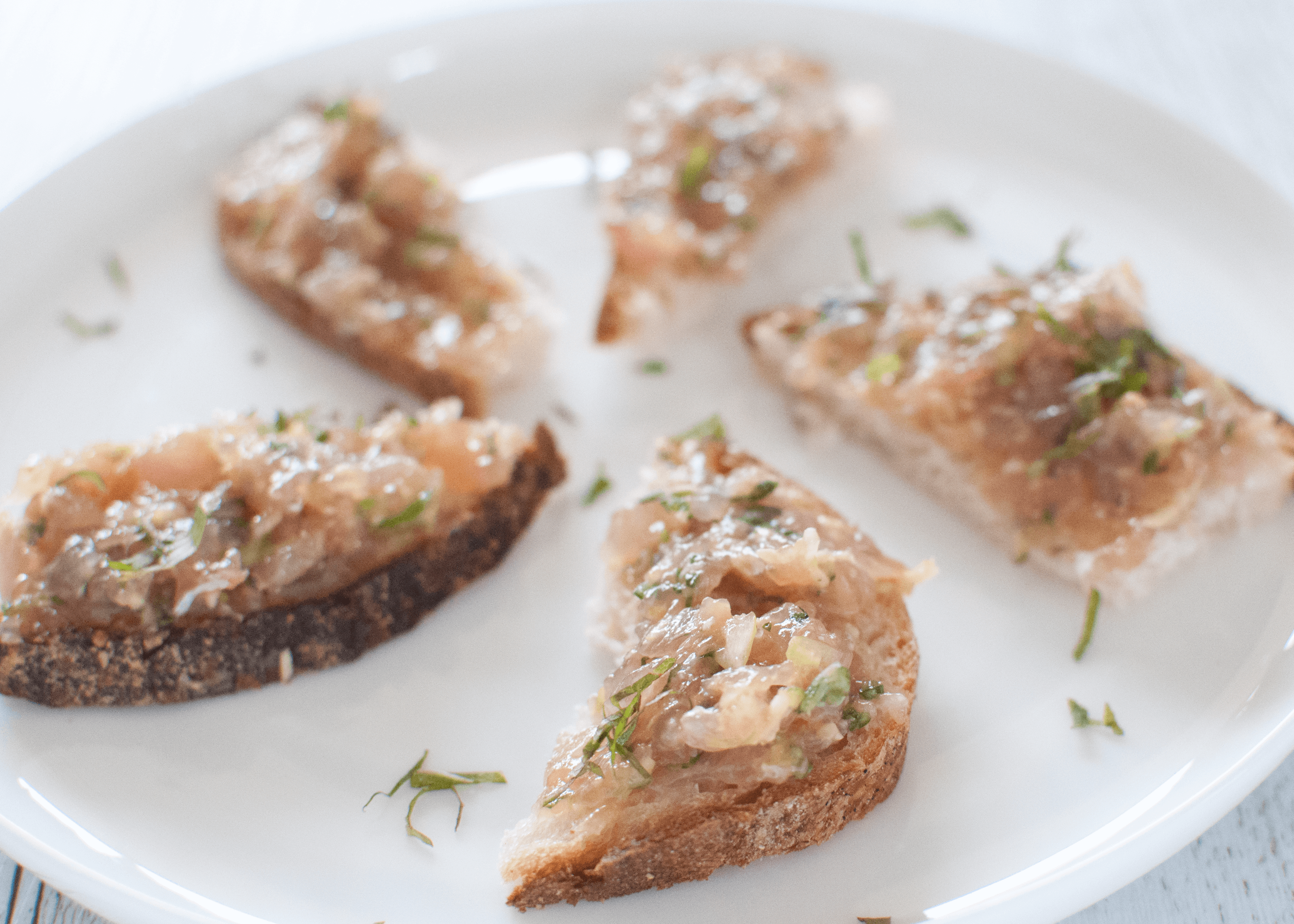 If you can get sashimi-grade kingfish or other fish listed above, try this Japanese-style Kingfish Tartare (Kingfish Tataki).

I also have a seared-style bonito tataki recipe but I decided to post tartare-style tataki first. When I posted Coffee Jelly a month ago and talked about serving kingfish tartare at my friend’s holiday cottage, I said I would post it soon. So, I am keeping my promise! 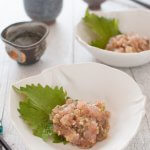 My Japanese-style kingfish Tartare, called Kingfish Tataki is a similar dish to fish tartare but with miso flavour. The fish is chopped much more finely than standard fish tartare. Everything is done on a cutting board with a knife, including mixing the ingredients.

1. It is also ok to use sashimi kingfish as you will be chopping them finely anyway.

Instead of kingfish, you can use yellowtail (horse mackerel) or sardines if they are sashimi-grade fillet.

2. Shiso is a Japanese perilla that can be purchased at Japanese grocery stores. Please visit my post, Chicken Patties Wrapped in Shiso for more details about shiso.

3.  Try not to press down the side of the knife to crash the fish pieces too much as it will make the tartare too sticky.