Katsu Sando (Pork Cutlet Sandwich) is another Japanese sandwich that is very popular together with Cafe-style Japanese Sandwiches that I recently introduced you. As the name implies, the filling is a thick Tonkatsu (Pork Cutlet) smeared with a fruity Japanese sauce. 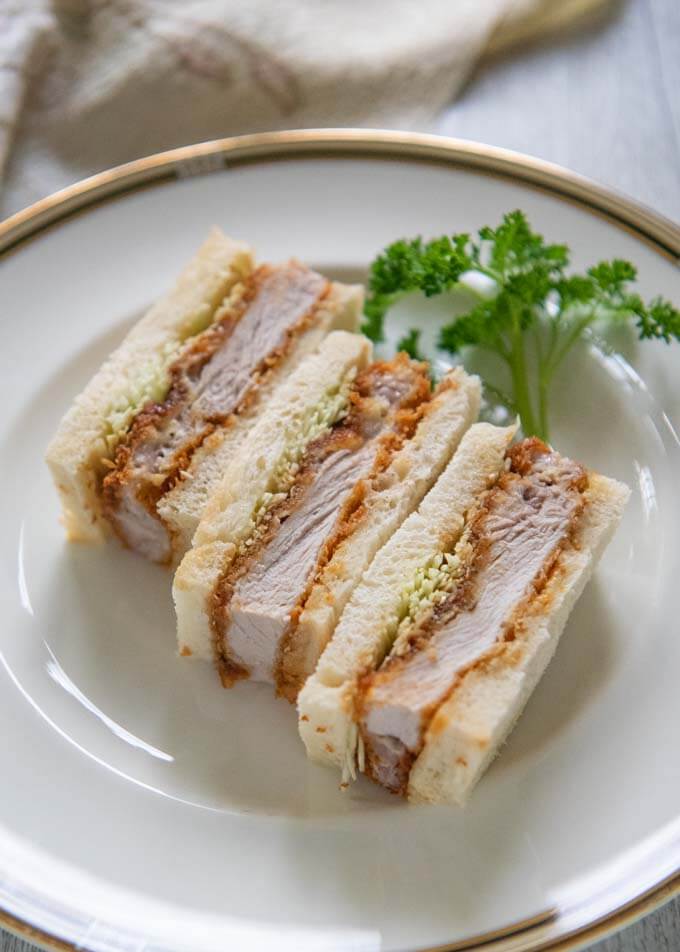 The combination of crispy cutlet and soft white sandwich bread gives you a great contrast visually as well as texturally. Katsu Sando perhaps does not look as elegant as Cafe-style Mikkusu Sando, but it is so filling and tasty.

Katsu Sando was invented by the tonkatsu restaurant Isen (井泉) in 1935, which was 5 years after the restaurant opened in Ueno, Tokyo.

Although it was in the Meiji era, the proprietress of Isen was brought up by parents who were ahead of their time, so her breakfast was toast and a cup of tea. Because bread was close to her heart, she thought of putting tonkatsu between the slices of bread. 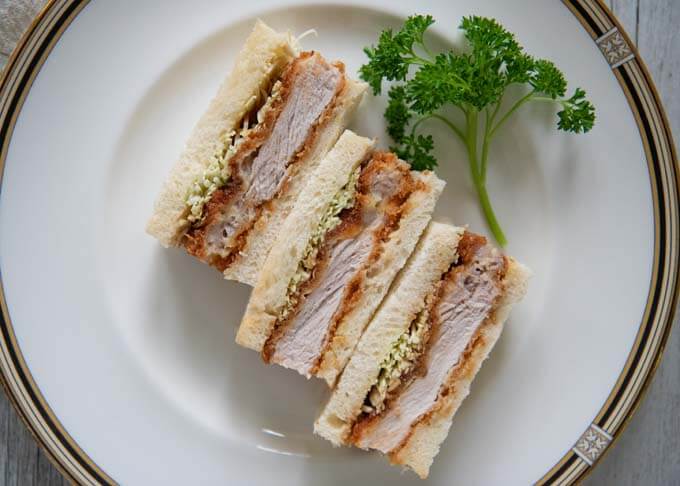 Isen is still in business and the location of the head office restaurant has not changed. If you ever visit Tokyo, you may want to try Isen (Japanese site).

There are only a few ingredients to make this gutsy flavoursome sandwich. 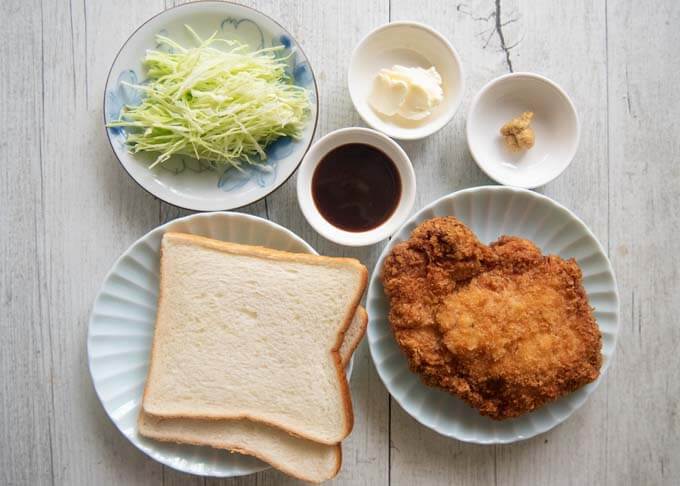 I used Japanese sandwich bread that is only 1cm/⅜” thick. However, since today’s filling is quite thick, you can use a thicker slice of bread if you prefer.

If your tonkatsu is not large, you can use two small cutlets to fill the bread. You just need to be careful about how you place them as I explained in the next section.

Some Katsu Sando come with just the cutlet and fruity sauce. They are still great, but if you add shredded cabbage and hot karashi mustard, you will experience a different flavour.

The method of making Katsu Sando is not much different from the sandwiches that I introduced in Cafe-style Japanese Sandwiches (see the video). But I cut the Katsu Sando sandwich into 3 pieces instead of 6 small pieces. 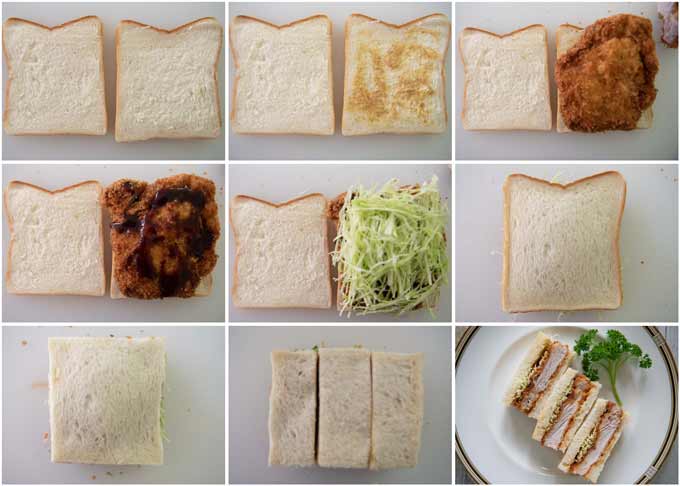 In the case of Mikkusu Sando, I used 6 slices of sandwich bread for 2 servings. But Katsu Sando needs only 2 slices for 1 serving because it is quite filling with the thick pork cutlet inside.

I used pork loin to make the pork cutlet for Katsu Sando. The meat inside the Katsu Sando was so tender, which is just what is needed for a sandwich. I ate the Katsu Sando while the filling was still very warm, and I thought it tasted even better than  Tonkatsu (Pork Cutlet) as a dish. 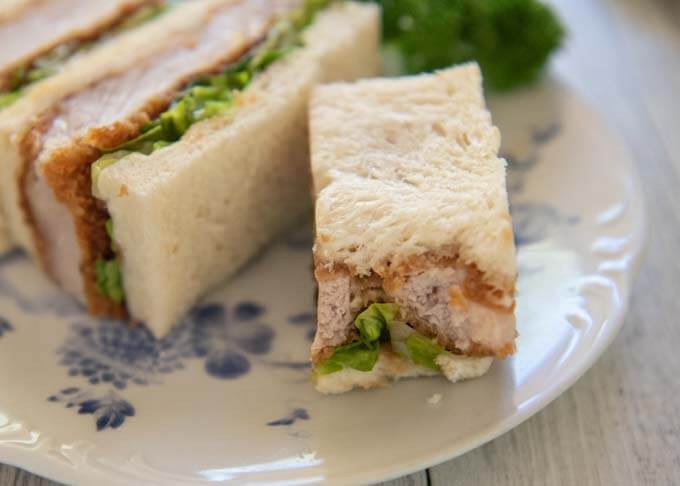 Made Katsu Sando with butter lettuce instead of cabbage. 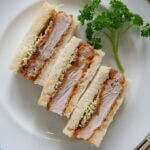 I recently introduced you to Cafe-style Japanese Sandwiches, and Katsu Sando (Pork Cutlet Sandwich) is another very popular Japanese sandwich. As the name implies, the filling is a thick Tonkatsu (Pork Cutlet) smeared with a fruity Japanese sauce.

Prep Time and Cook Time do not include the time required to make Tonkatsu.

1. I used Japanese sandwich bread that is only 1cm thick. However, since today’s filling is quite thick and heavy, you can use thicker slices.

2. If you can’t make a large tonkatsu, you can use two smaller pieces.

4. The best alternative for karashi is English mustard.

5. Parsley is optional, but I strongly recommend placing something green on the plate because brown is the dominant colour and a little bright colour lightens the plate up.

6. The sliced bread might not be in an exact rectangle shape. You need to adjust the width of the crust when trimming off.

In the Meal Idea section of  Cafe-style Japanese Sandwiches, I said that miso soup would not go well. It was because those sandwiches are more like Western-style sandwiches. On the other hand, Katsu Sando goes with miso soup very well. It was invented by a Japanese restaurant after all. 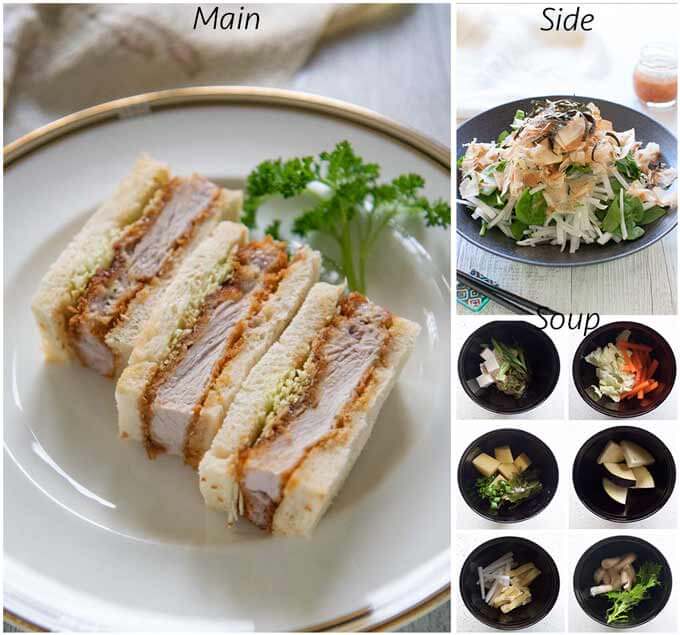