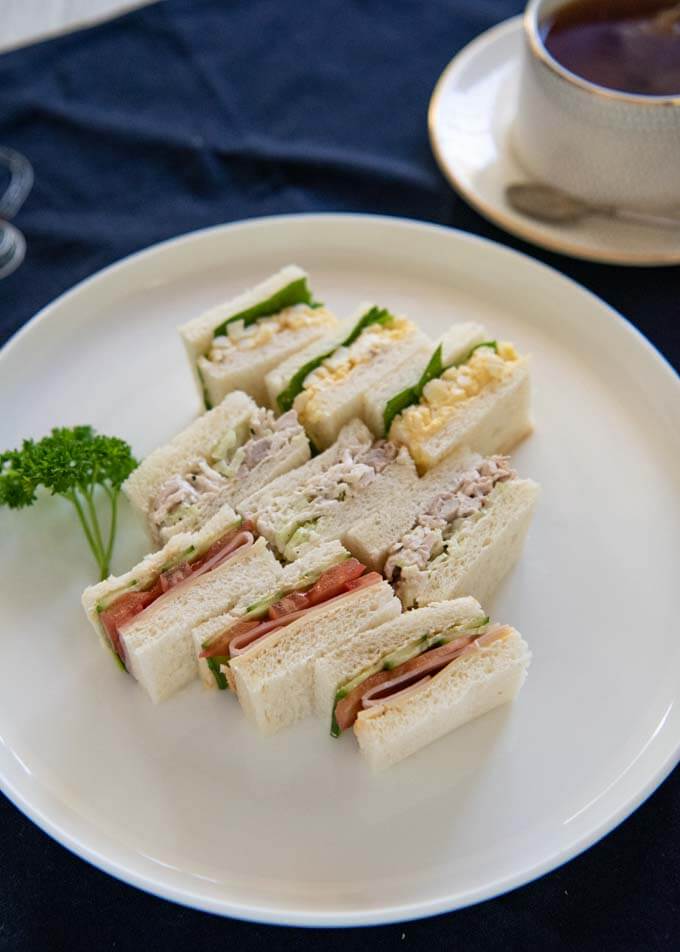 In addition to toast and cakes, Japanese cafes usually serve a plate of sandwiches. They are often called mixed sandwiches because of the different fillings served on a plate.

It is called ‘mikkusu sando’ (ミックスサンド) in Japanese by shortening the word sandwich to ‘sand’.  Today’s Japanese Sandwiches recipe is a mikkusu sando recipe.

The fact that Nagi also posted sandwich recipe recently was purely coincidental. Nagi’s sandwiches are Deli style and my sandwiches are English tea style. Now, you can try both!

I can list a few major differences between the two: 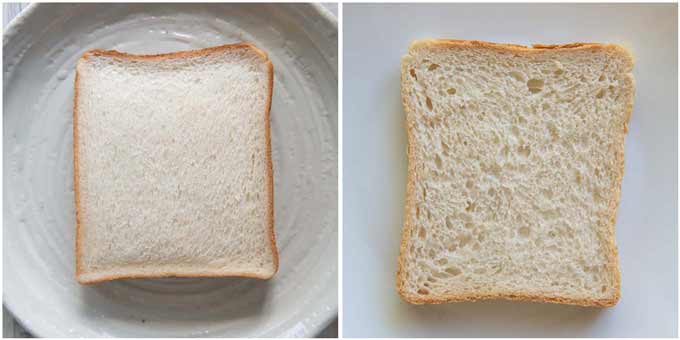 The thickness of the bread is also different. Japanese sandwich slices are 1cm/⅜” thick, while the Australian sandwich bread that I buy from the local supermarket is 1.3-1.5cm/½-⅝” thick. It looks like a small difference in the thickness, but when you make sandwiches with them, you will see a difference in balance between the bread and the fillings. 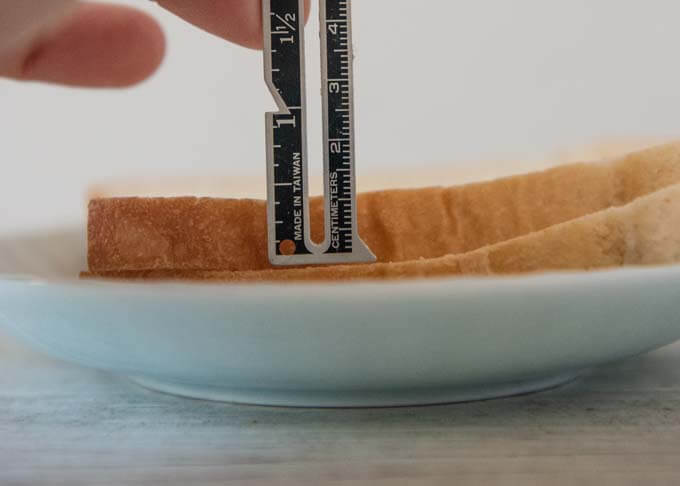 I bought a loaf of sliced Japanese sandwich bread from a Japanese Grocery store that buys freshly baked bread from the Japanese bakery Fuji Bakery in Killarney Heights.

Japanese sandwich bread is a loaf of thinly sliced white bread called ‘shokupan’ (食パン). It is called Japanese milk bread in English since it uses milk to make a dough instead of water. Shokupan is probably the lightest, fluffiest, and softest bread you will come across.

Where you live, you may not be able to buy fresh Japanese sandwich bread, but if you can find frozen sliced shokupan like in this photo below, you can make sandwich bread from it. Japanese and Some Asian grocery stores have them in the freezer section. 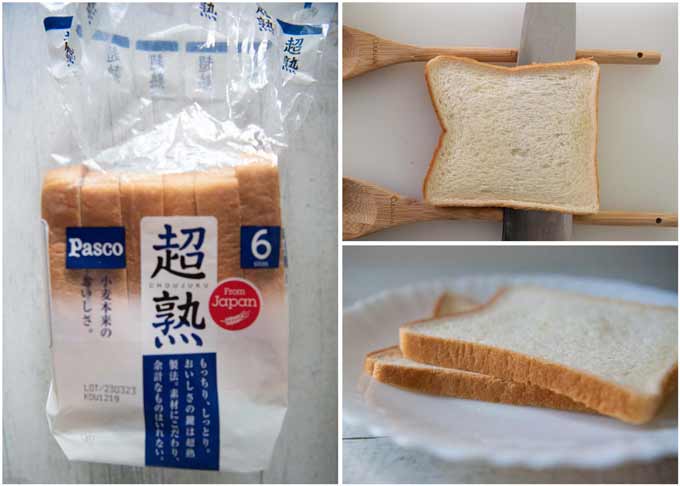 I have not posted any kind of Japanese bread recipes yet, but I shall take up the challenge of  the shokupan recipe one day.  For now, I go and get my sliced bread from the Japanese bakery.

Given that one of the key elements of Washoku (Japanese cuisine) is hospitality, I can totally understand why Japanese people liked crustless sandwiches. They are soft and easy to munch with the consistent texture of the bread. 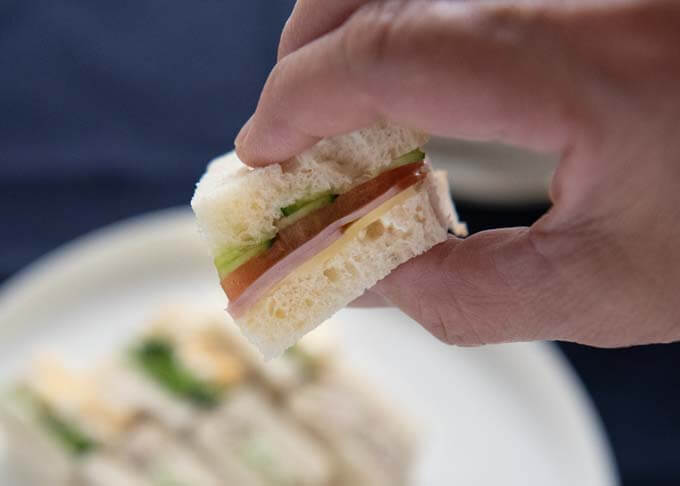 When I came to Australia, I was surprised that every single sandwich came with the crust. It looked dynamic and casual compared to the sandwiches that I knew at the time. I think that both types of sandwiches have their own characteristics and I like them both.

Sandwiches without crusts look good but you would wonder what to do with the crust bits. You don’t want to throw them away. If you have livestock, you might feed them with the leftover crusts. Otherwise, you can deep-fry them or toast them to make delicious nibbles. 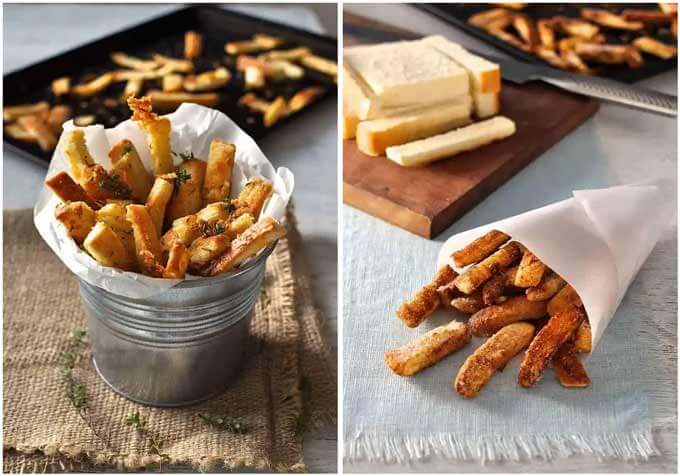 The majority of Aussie sandwiches that are made from sandwich breads are triangle. they are simply cut in half from the square bread (with crust intact). But in Japan, sandwiches are often cut into 3 or 4 rectangle pieces.

I can understand why Japanese sandwiches are cut into smaller sizes, though. Imagine if you need to hold a halved triangle sandwich with no crust around the bread? The bread is so soft that it will fall apart!

If you want to make triangle sandwiches without crusts, you’d have to make each piece smaller by cutting the bread diagonally into 4 triangles, like the egg sandwiches below. 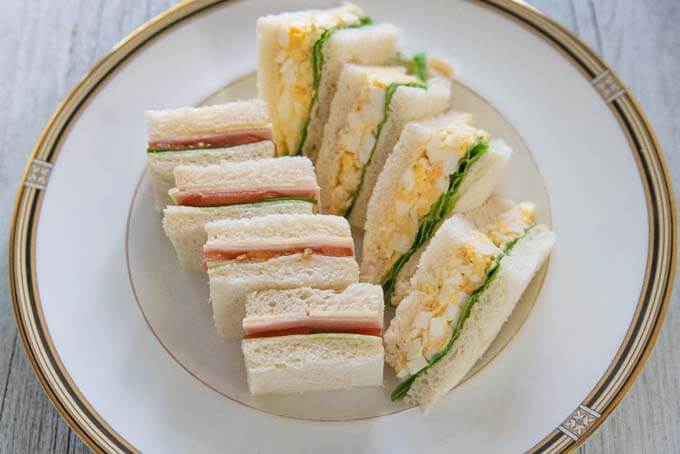 Cutting the sandwiches into small pieces the Japanese way allows you to place the sandwiches on the plate revealing the fillings without any support. It is also great to pack in a bento box. What’s in my Cafe-style Japanese Sandwiches 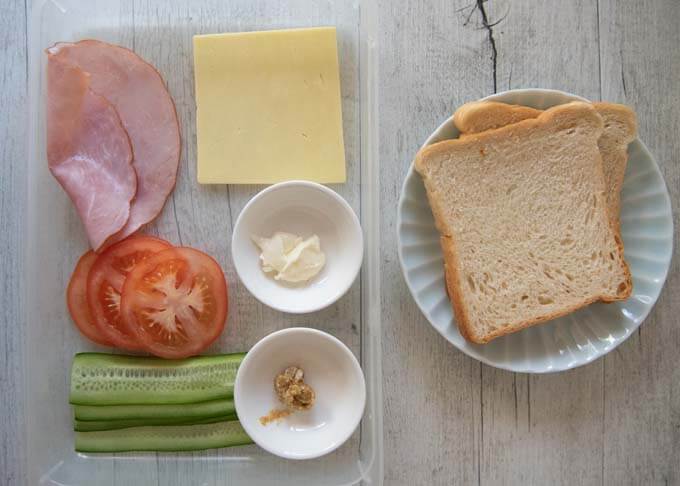 Japanese mustard does not contain acidity unlike Western-style mustard, and it is quite hot. You can substitute it with English mustard. 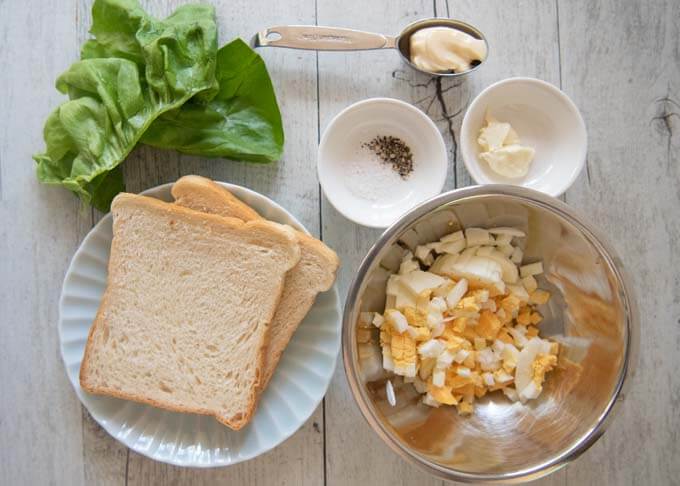 Kewpie is a Japanese brand which is famous for mayonnaise. You can find details about it in the KEWPIE MAYONNAISE section of  Japanese Potato Salad. Using Kewpie mayonnaise makes the flavour of the fillings more authentic. 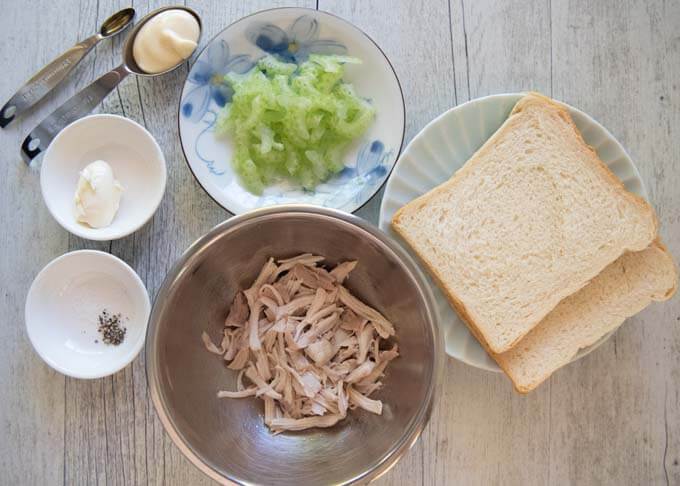 Shiro dashi adds umami, saltiness, and sweetness to the filling.

How to make Cafe-style Japanese Sandwiches

The basic process is same for all the sandwiches regardless of the fillings. Watch the video. 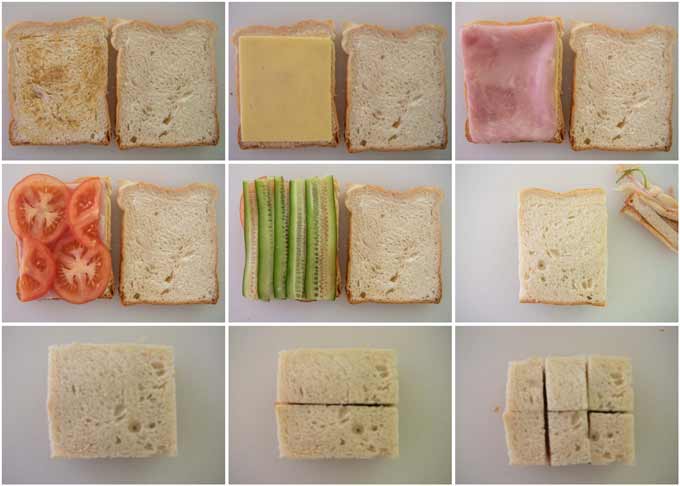 You put butter on one side of each bread, which becomes inside of the sandwich. This will prevent the moisture from getting through to the bread and making it soggy.

In the case of Hamu Sando, there is no particular order of piling on the ingredients when putting them on the bread. But I avoid the sliced tomato directly touching the bread. This is because the sliced tomatoes contain a lot of moisture, and the bread will become soggy.

I like the soft bread of Japanese Sandwiches. They show off the colourful fillings on the plate, which is appetising. The balance between the thickness of the bread and the fillings is just right. 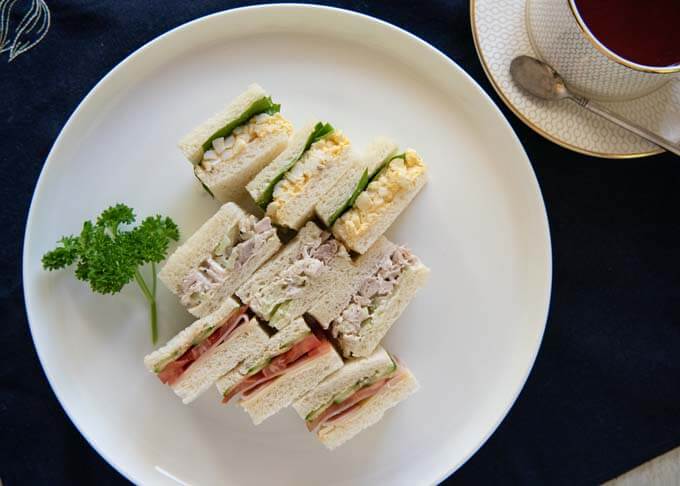 I hope you can find Japanese milk bread, shokupan and make delicate sandwiches to experience the differences. 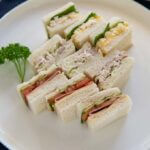 Japanese sandwiches are different from Aussie sandwiches. They are basically a traditional English tea sandwich. They are known for their simplicity, and they make a plate of sandwiches visually attractive using just a few different fillings.

In this recipe, I made mixed sandwiches, which is called 'mikkusu sando' in Japanese, that consist of hamu sando (ham sandwiches), tamago sando (egg sandwiches), and chikin sando (chicken sandwiches). See the video.

Cook Time does not include the time to cook boiled egg and chicken.

1. Japanese sandwich bread is a loaf of thinly sliced (about 1cm/⅜" thick) white bread that is called ‘shokupan’ (食パン). It is called Japanese milk bread in English.

If you Google search ‘shokupan’ you might find an online shop that sells it.

You might also find a bag of frozen shokupan that contains 4 or 6 slices at Asian grocery stores. You can make thin sandwich slices from 6-slice (2cm/¾" thick) shokupan per below:

i) Place a slice on a workbench, then place two 1cm/⅜" thick sticks next to the bread, on horizontal sides. I used long bamboo spatulas that I bought from Kmart. The thickness of the handle was about 1cm/⅜".

ii) Using a long sharp knife (don’t use a serrated knife as it does not cut cleanly), start from the right edge of the bread (for the right hander).

iii) Gently slice the bread horizontally, making sure that the blade of the knife always touches the two sticks.

2. I used a piece of leg ham, but you can use any kind of ham. You could use turkey or chicken ham if you wish, but I think the pink colour of the ham goes better with the other ingredients.

3. I used sliced tasty cheese, which is matured cheddar. Colby, Swiss, and Gouda cheese also go well with it.

5. The thickness of my tomato was 2-3mm. Any thicker than that will look unbalanced among other ingredients.

6. Unlike Western-style mustard, karashi mustard does not contain acidity, and it is quite hot. The best alternative for karashi is English mustard.

7. You can dice the boiled eggs with a knife, but I used an egg slicer and slice each egg three times by rotating the egg vertically, then horizontally.

8. You can use iceberg lettuce or other soft green salad leaves such as coral leaf lettuce.

9. For the first trial, I used some leftover chicken meat from Easiest Chinese Chicken Broth. You can also use leftover roast chicken meat.

10. Shiro dashi adds a touch of umami, saltiness and sweetness to the filling.

11. Most Japanese cafes serve sandwiches with a sprig of parsley. I think a couple of cornichons on a toothpick works well too.

12. The sliced bread might not be in an exact rectangle shape. You need to adjust the width of the crust when trimming off.

13. It makes the sliced sandwiches look better and sits well with the thicker side on the plate.

14. Nutrition per serving. It is assumed that the optional shiro dashi is not used in Chikin Sando.

Japanese Sandwiches are usually eaten with tea or coffee at a cafe or a restaurant. But if you are serving them as a meal, I would suggest that you serve them with a soup.

Other than that, I thought a little dessert might complete a meal. 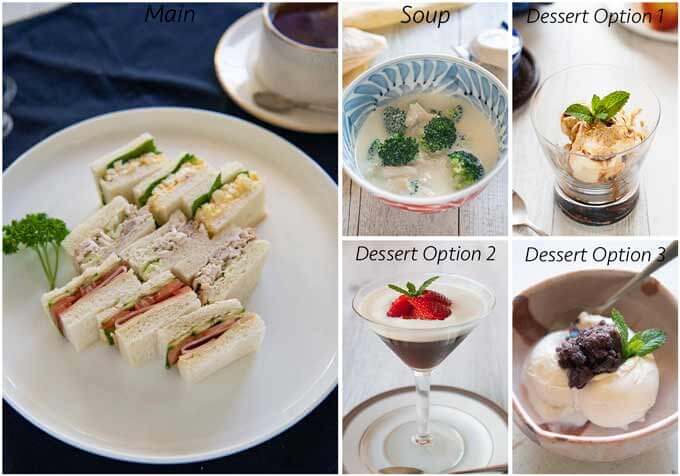