A very popular Chinese dish, Happosai (Combination Stir Fry)  is not modified very much from the original Chinese version. It is made with lots of vegetables, meat and seafood coated with a thick flavoursome sauce. 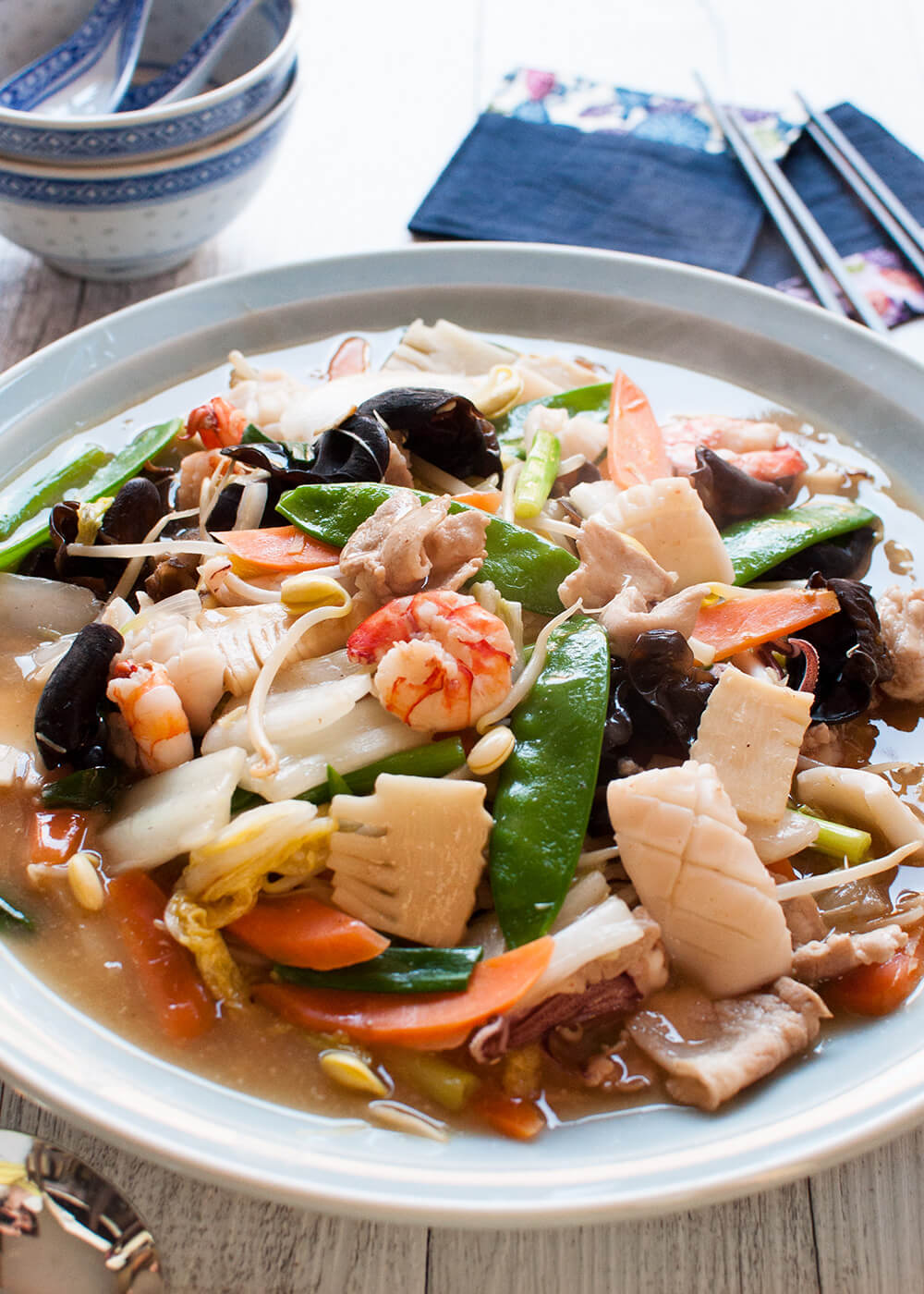 Happopsai (八宝菜) translates to eight treasure dish (八 – 宝 – 菜) and it comes from China. Apparently “eight” (八) in this context does not mean 8 kinds. It means “many”. That’s why I decided to call it “combination stir fry”, which is commonly available at Chinese restaurants in Australia.

The kanji character “八” for eight is pronounced “hachi” on its own in Japanese and it is believed to be a good luck number. The character starts from a narrow top and broadens to the bottom. This broadening pattern is called “suehirogari” (末広がり), giving the idea of growing prosperous. In the case of China, it is also a lucky number as the sound of this character is similar to the word meaning to generate wealth.

So, this is a lucky dish with plenty of goodies. Once you prepare the ingredients, it’s so fast to make, just like many Chinese stir fry dishes. 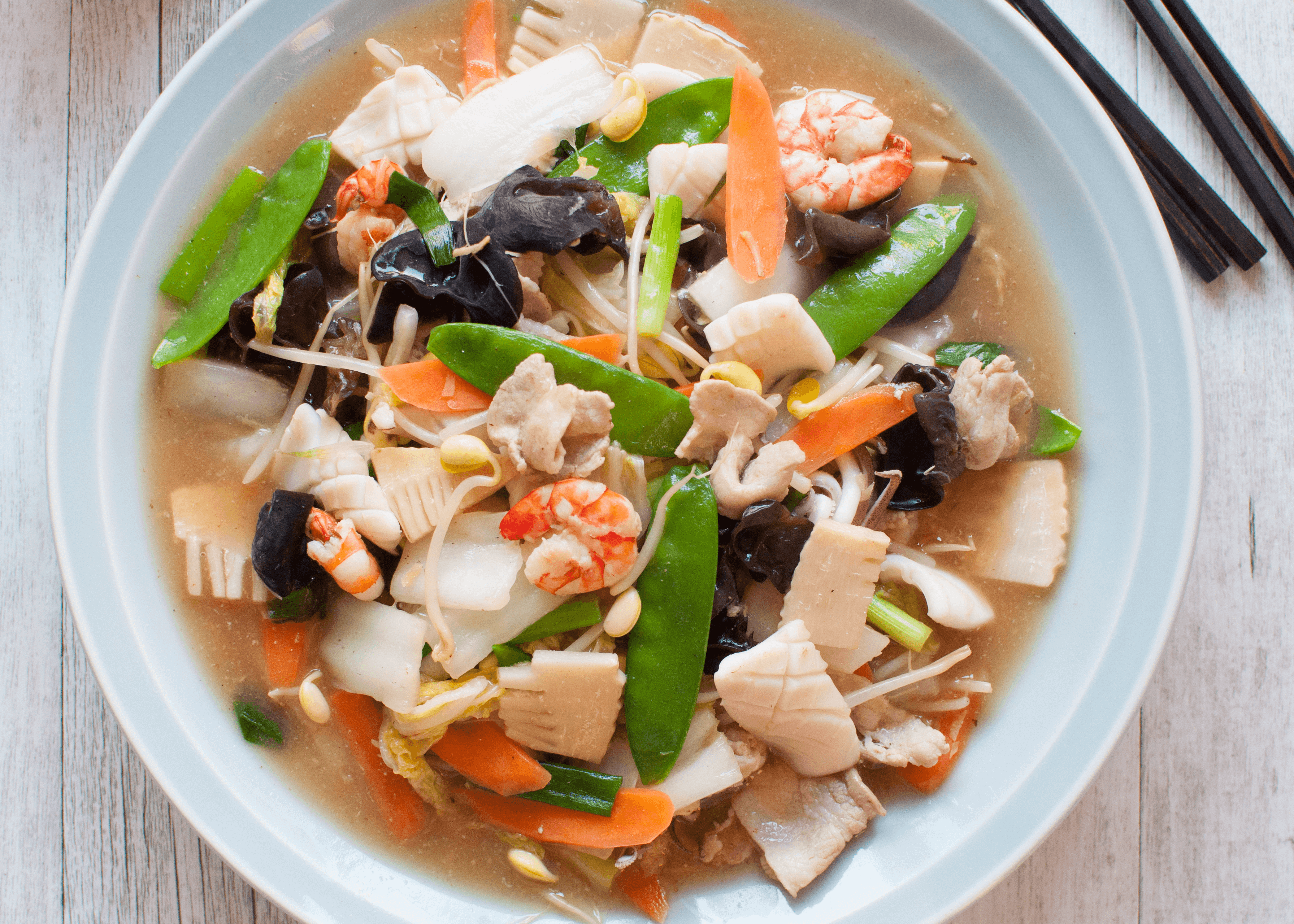 As with the combination stir fries at different Chinese restaurants, the meats and vegetables can vary. You can use scallops or crab meat if you want to go fancy or fried tofu, cabbage, shiitake or other mushrooms, beans, peas, choy sum, buck choy, baby corns, onion. The list is endless.

When I think of happosai (combination stir fry), I also think of chop suey (チョプスイ) as my mother called the dish chop suey. I thought chop suey was also a Chinese dish at first and that there must be a difference between the real Chinese version of happosai and chop suey, although at my home I could not see the difference.

But later on, I learnt that chop suey was actually invented in America by Chinese Americans (no wonder it is written in katakana in Japan!). Looking at the various recipe images, I think that my happosai might be closer to chop suey. 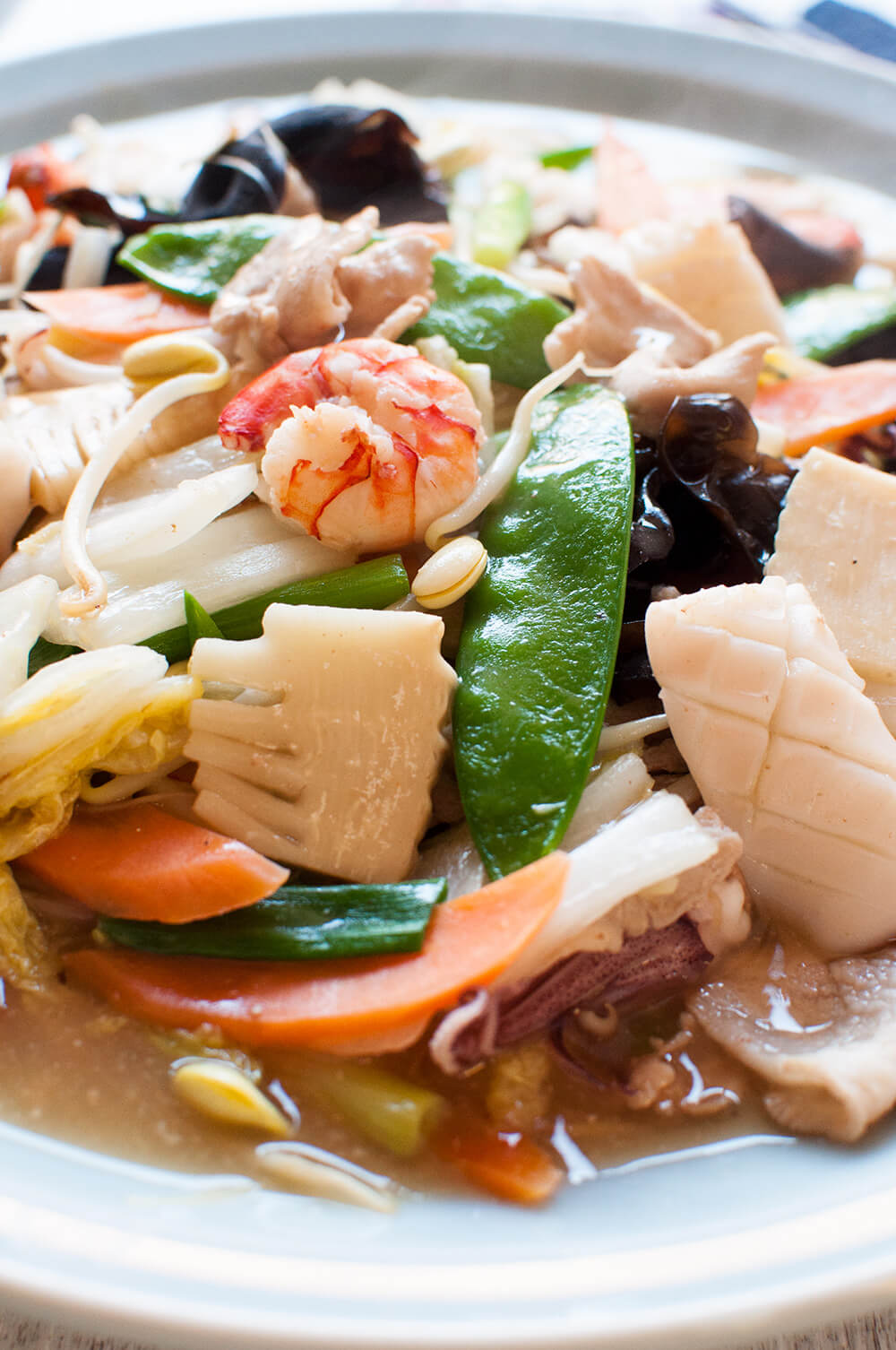 I guess just like any other dishes, the flavour and ingredients get slightly changed region by region, household by household and as long as it tastes good, it really doesn’t matter what you call it.

I used the Chinese style chicken stock powder you can see in the photo below, top right. I bought it at the Asian grocery store. It gives a touch of Chinese flavour but you could use a normal chicken stock cube or powder.

Incidentally, top left photo below is black fungus, also called wood ear fungus (or mushroom). It is sold dried at Asian grocery stores. When rehydrated, it expands a lot and gives a crunchy texture which I love. 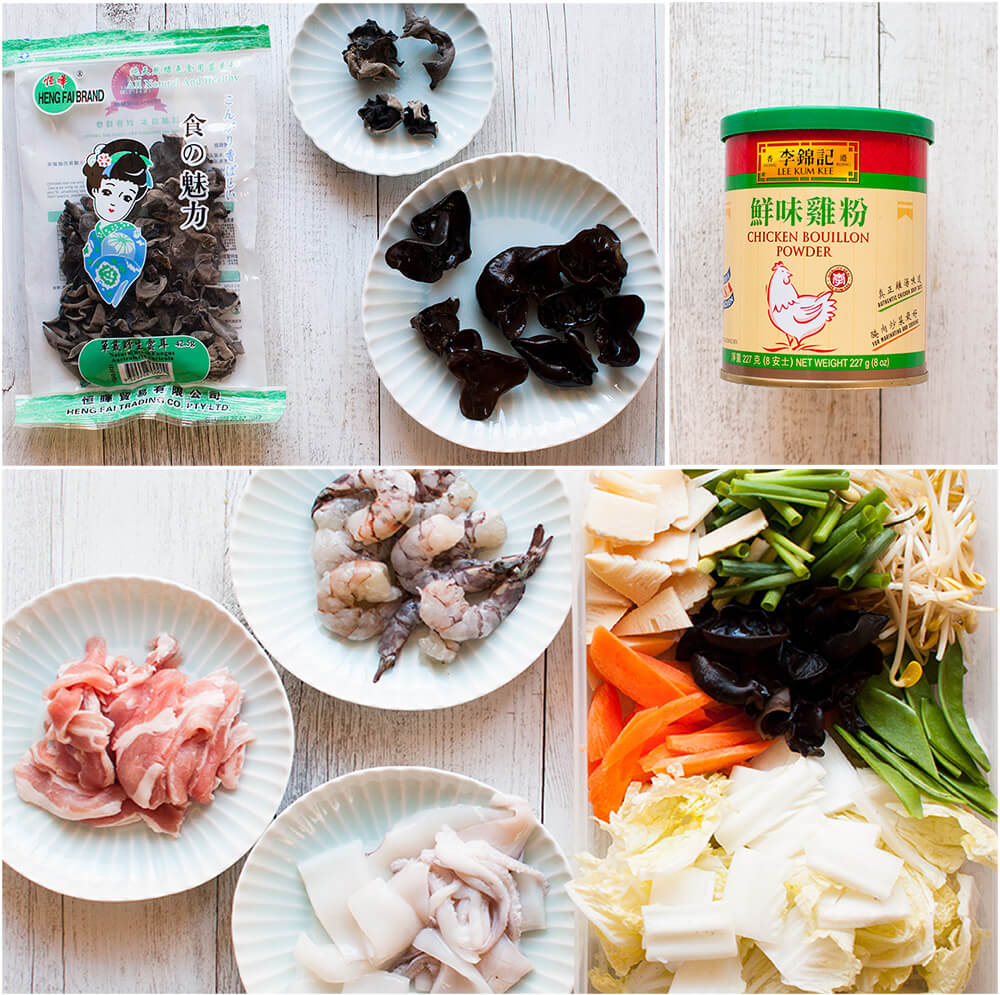 When I was in high school, I ate a lot just like most school kids at the time. Chinese meals were one of my favourites as they were tasty and filled my stomach. You need high calorie food when you are a teenager.

Because both my parents were working as teachers and my mother was not a keen cook (father would not dare to step into the kitchen being a typical Japanese husband at the time), we sometimes ordered Chinese meals from the restaurant to be delivered.

Ramen with lots of toppings called “tanmen” (タンメン) was my favourite and it was almost like happosai topping on ramen. I also liked the dish called “chuuka-don” (中華丼) which means Chinese donburi. As the name suggests, chuuka-don is a rice dish in a bowl, i.e. “don” and the topping is happosai. I liked the topping with many different ingredients and the light salt flavoured thick sauce. It was really tasty. 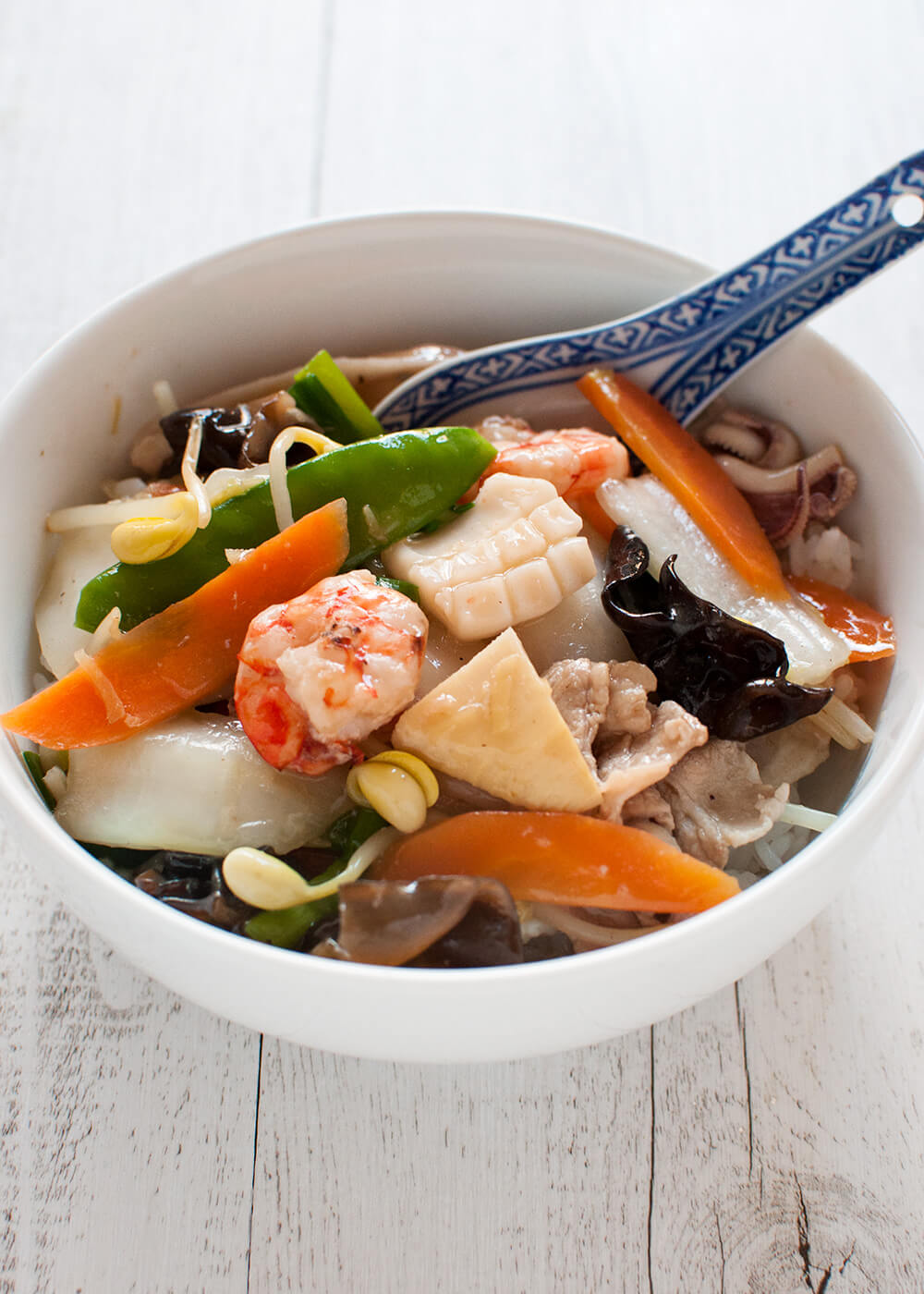 Even today, every time I pass by a Chinese restaurant in Japan and look at the display models of dishes they offer, my eyes go to the ramen and chuuka-don.

The happosai in this recipe makes large serves for two or 4 small  servings. After I cooked happosai, I shared half of it with my son. I ate one half of my share as it was but the rest was eaten as chuuka-don. See the photo above. So delicious and filling! 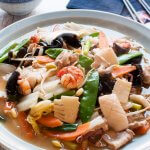 A very popular Chinese dish, Happosai (八宝菜) is not modified very much from the original Chinese version and it is similar to combination stir fry. It is made with lots of vegetables, meat and seafood coated with a thick flavoursome sauce. You can use different vegetables if you like. Please see notes for alternative vegetable suggestions.

1. I bought calamari, which has thinner and tenderer meat than squid. Please see the step by step photos of squid preparation below my recipe, Squid with cucumber and Wakame Nuta.

2. I used pork belly which was already thinly sliced into strips. I just cut them into short pieces. If you have a pork chop or steak, simply slice them thinly.

At Asian grocery stores, you may find a can of boiled bamboo shoots that are already cut into rectangular shapes. They are very handy to use.

5. I had soy sprouts (sprouts with soy beans attached at the end) so I used them. But normal bean sprouts are more commonly used in happosai.

6. You can buy a tin of Chinese style chicken stock powder at Asian grocery stores. Please see the photo on the blog.

7. Cooking time depends on the thickness and the size of the pork pieces. My pork was very thin and it needed only 30 seconds.

9. If you place happosai on top of hot rice in a bowl, it becomes chukka-don which is rally delicious and filling. 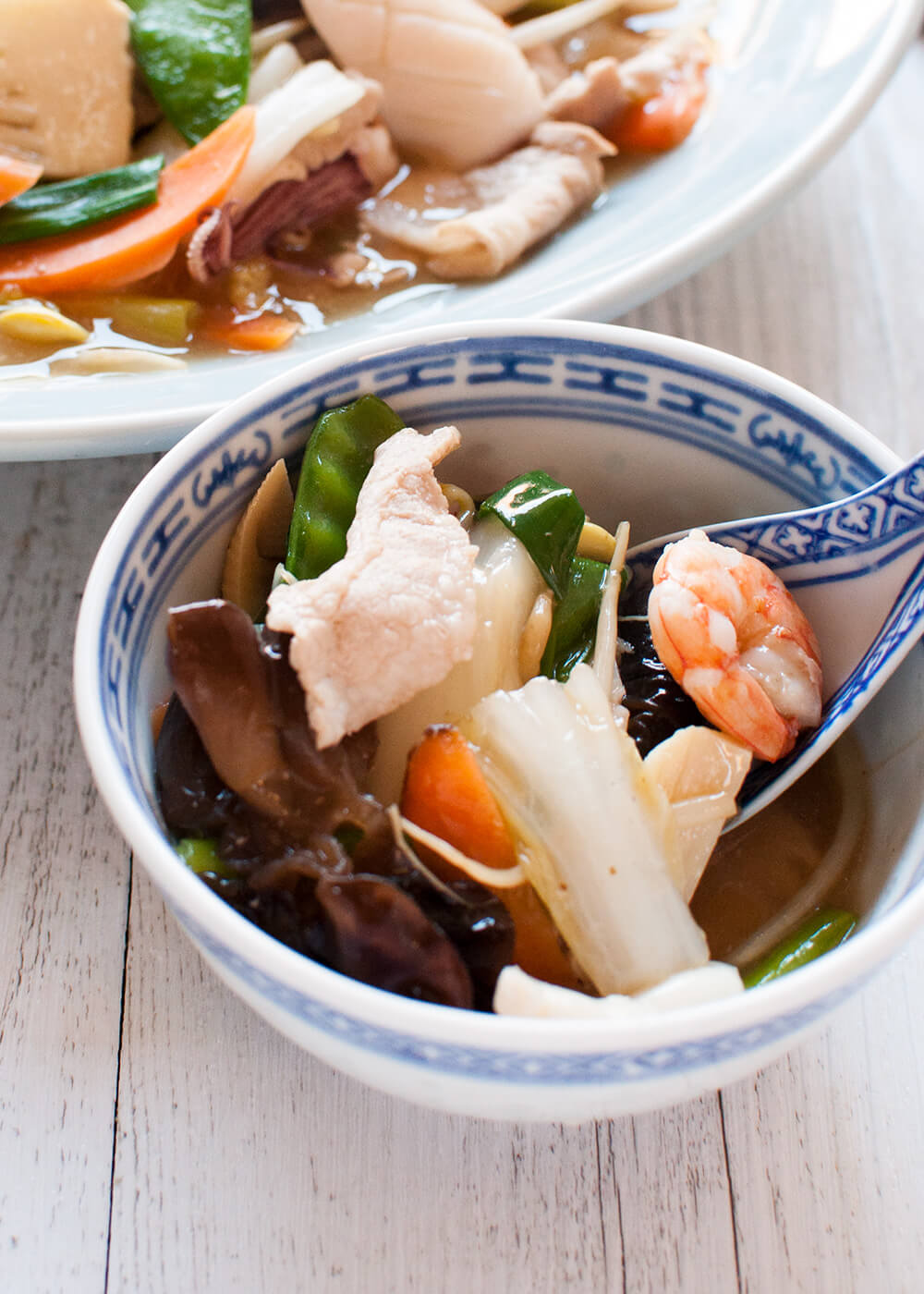