Moist and soft chicken is the hero of today’s dish, Crystal Chicken with Shallot and Ginger Dressing. By boiling the chicken pieces after coating them with cornflour/corn starch and quickly cooling them down, you can get a mass of shining, slippery chicken pieces. 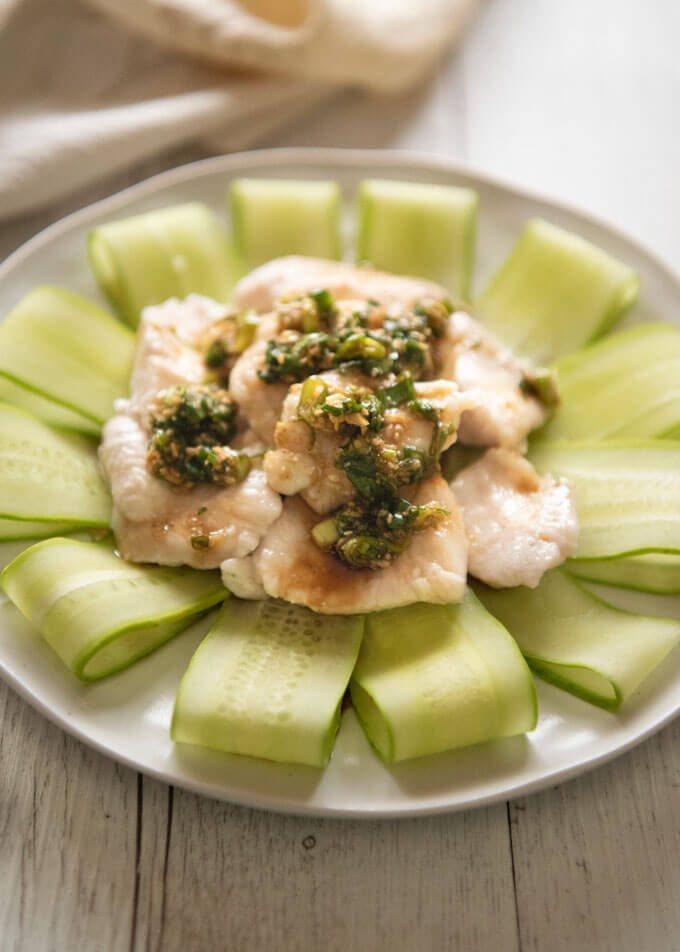 Crystal Chicken with Shallot and Ginger Dressing is a cold dish that is perfect on a hot summer day. But even if it is winter, I don’t mind eating this dish because it is so tasty.

There is a Chinese dish called ‘crystal chicken’ (水晶雞), but it is quite different from the Japanese Crystal Chicken. The method of cooking and the appearance of the dish is different.

Japanese Crystal Chicken is called ‘suishōdori’ (水晶鶏). The word ‘suishō’ (水晶) means crystal and ‘dori’ (鶏) is the same thing as ‘tori’, which means chicken. The sound is changed for easier pronunciation. It is named so because the coating on the chicken pieces shines and looks like crystal. 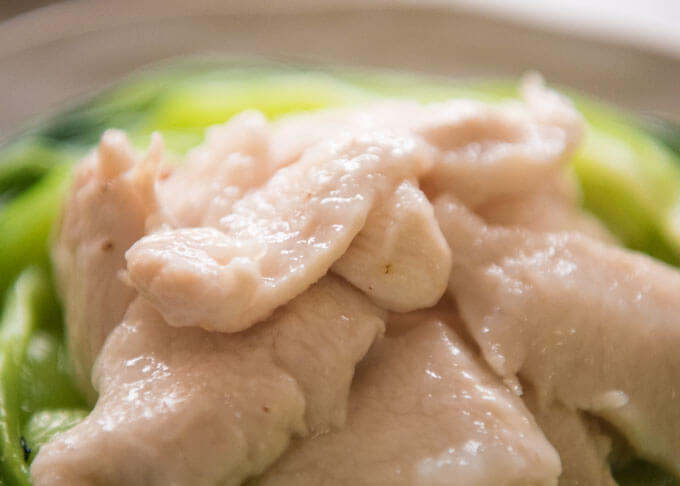 The Chinese version is a steamed whole chicken,  without coating in cornflour. Before steaming the chicken, it is marinated in a special marinade. Dissect/slice the cooked chicken and serve it.

And if you Google search images on the English word ‘crystal chicken’, you will never find the one like the Japanese version. I wonder if my interpretation is somewhat incorrect…

What’s in my Crystal Chicken and Dressing

It is a very simple and quick chicken dish. The main ingredients are just chicken and few seasonings.

The dressing is a sesame flavoured salty and sour sauce with plenty of shallots/scallions and ginger. You just mix these ingredients together. The sesame flavoured Shallots and Ginger Dressing makes the dish so tasty: 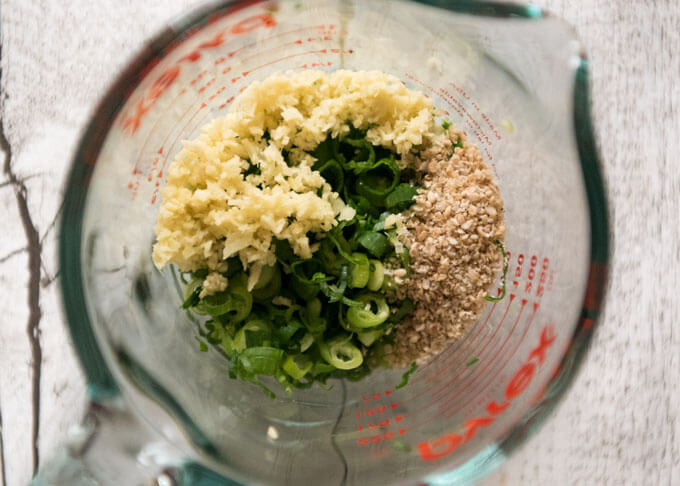 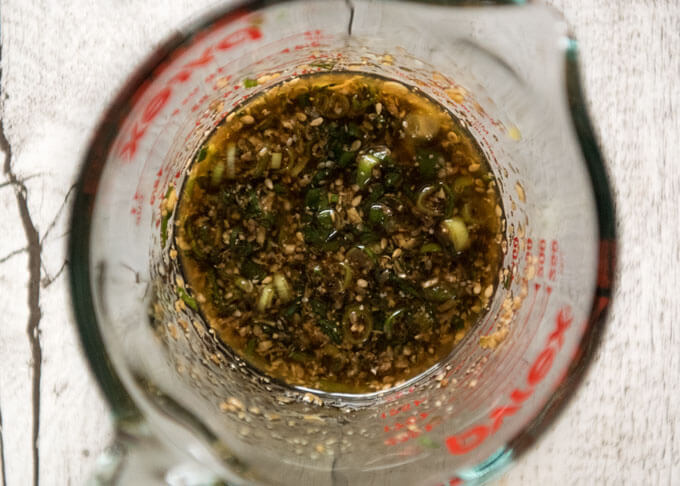 There is a specific way of slicing the chicken pieces for today’s dish. It is called ‘sogigiri’ (そぎ切り, shaving cut). I introduced sogigiri in my post Sashimi (Sliced Raw Fish) with some photos, but here is how I made the chicken pieces using sogigiri (refer to the step-by-step photo below).

Halve the chicken breast lengthwise to make two narrow pieces (photo 1). Place a chicken piece lengthwise on a cutting board with the thinner end to the left (for a right hander).

Starting from the left end of the chicken piece (for a right hander), place a knife perpendicular to the length of the meat and tilt it diagonally, say 45 degrees from the vertical position of the knife (photo 2). Slice the chicken at an angle into 1cm/⅜” thick pieces (photo 3, 4).

The greater angle the knife is tilted at, the wider piece of sliced chicken you get.

When you are slicing the thickest and widest part of the chicken piece, position the knife on a diagonal angle against the direction of the meat instead of perpendicular to it. This way you will be able to cut a smaller piece of chicken (photo 5). 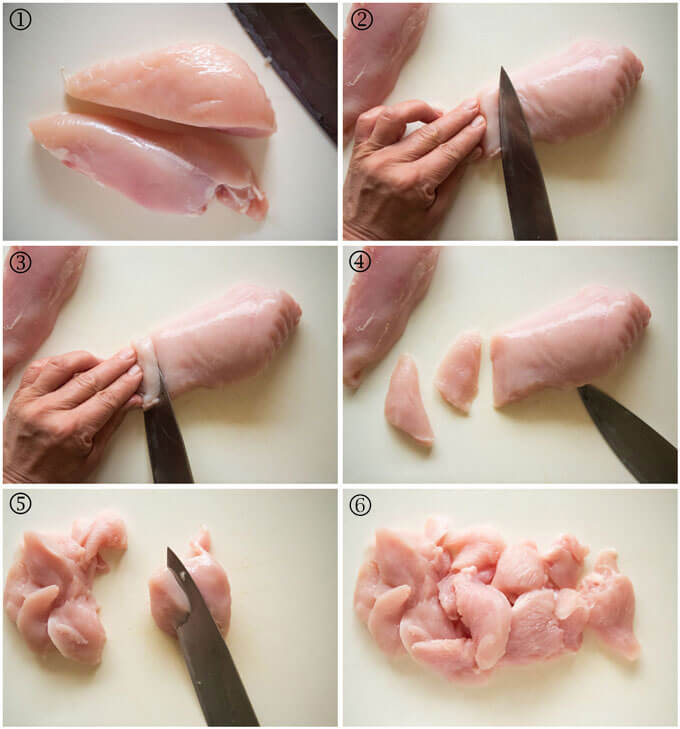 Coating the chicken pieces with cornflour also encloses the good flavour and moisture of the chicken inside when boiled, resulting in moisture tasty chicken.

There is nothing difficult about cooking Crystal Chicken as you can see in the steps below: 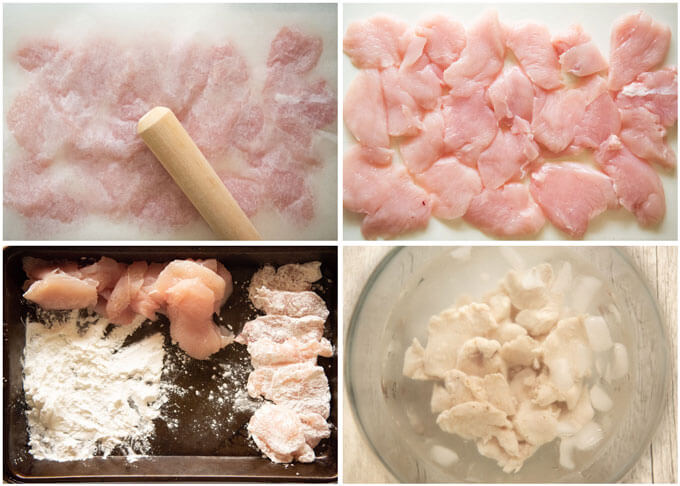 The only tricky thing is picking up the chicken pieces from the boiling water. They are slippery. I was using cooking chopsticks and boy, it was difficult to pick them up with the round bamboo chopsticks. You can of course use tongs or a small sieve with a handle to pick them up.

Crystal chicken does not have a vivid colour, so I serve it on green vegetables. In today’s recipe, there are two options – cucumber ribbons and bok choy.

The length of the cucumber ribbons is about 12-15cm/4¾-6″. I use a vegetable peeler to make the ribbons.

Bok choy leaves need to be blanched. Cut off the end of the stem to remove most of the outer leaves. If the leaves are very wide, I halve them. Cool down the blanched bok choy quickly in cold water. Make sure you squeeze as much water out  as possible when plating.

Here is the example of how I plate the greens. 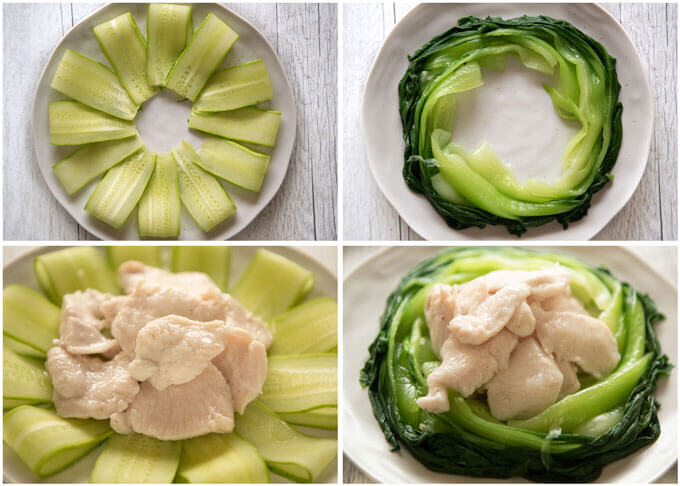 Crystal Chicken with Shallots Ginger Dressing is an easy but tasty dish. You will be amazed to find that the chicken is so tender.

The chicken can be kept in the fridge for a day but the coating loses the clarity and becomes a bit sticky and cloudy. The flavour will still be good. 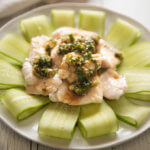 Moist and soft chicken is the hero of Crystal Chicken with Shallot and Ginger Dressing. By boiling the chicken pieces after coating them with cornflour/corn starch and quickly cooling them down, you can get a mass of shining slippery chicken pieces.

The dish is served cold, which is perfect on a hot summer day.

1. Instead of chicken breast, you can use chicken tenderloin. You will be surprised how tender and juicy the chicken pieces are.

The quantity of cucumber ribbons you make is up to you. I used a long cucumber cut to 15cm/6" long ribbons.

3. I cut the end of the stem to remove most of the outer leaves. If the white part of the leaf is very wide, I halve the entire leaf vertically. I also halve or quarter the inner leaves attached to the stem.

After blanching the bok choy, quickly cool it down in cold water. Squeeze out as much  water as possible when plating it.

4. If you don’t do this, you will end up with a very wide piece of chicken. Alternatively, slice large, wide pieces and cut them into smaller size pieces.

5. It is better to coat the chicken pieces with flour batch by batch immediately before boiling. If the cornflour is on the chicken for a while, it absorbs the moisture from the chicken and loses the crystal look when boiled.

6. The chicken can be kept in the fridge for a day but the coating loses the clarity and becomes a bit sticky and cloudy. The flavour will still be good.

7. Nutrition per serving. It does not include greens.

I tried to match Crystal Chicken with dishes that can be served cold or at room temperature. Those two side dishes are perfect for it. These can also be made ahead.

Another reason for choosing Dashimaki Tamago is that Japanese often match chicken with eggs in a dish, e.g. Oyako-don (Chicken and Egg on Rice). And having a chicken dish and an egg dish in a meal is a common practice. 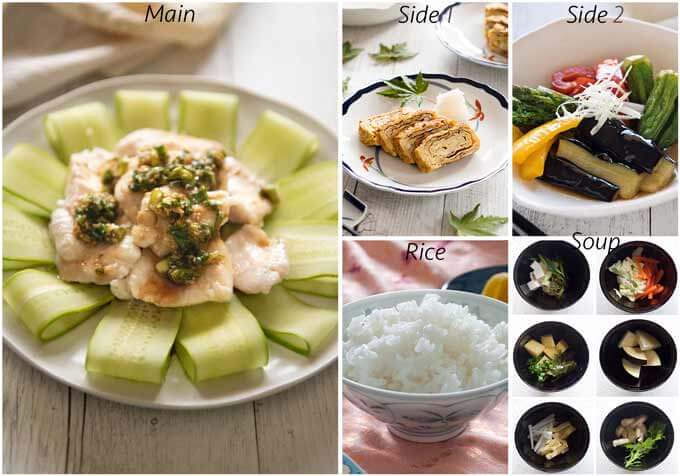