Chinese Chicken Broth is quite different from Western-style chicken stock. Apart from the main ingredient, chicken, you only need green onions and a piece of ginger. My Easiest Chinese Chicken Stock uses a whole chicken. Put everything together in a pot with a plenty of water and boil it for 3-4 hours. That’s all there is to it. 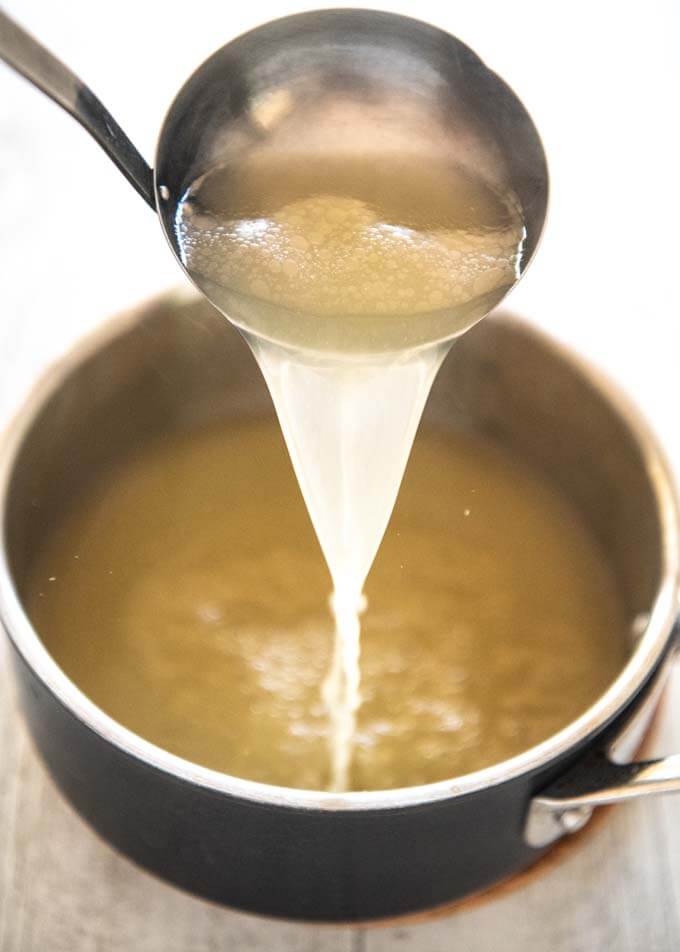 The variation of Chinese Chicken Broth comes from the chicken portions that you use. Some recipes use chicken carcasses only, some use chicken wings and necks together with carcasses.

The method of making Chinese Chicken Stock with carcasses is very similar to my Home-made Ramen Broth. It takes time to cook, but the process is very simple.

Today’s recipe is even simpler. Instead of chicken carcasses, I used a whole chicken to eliminate pre-boiling. 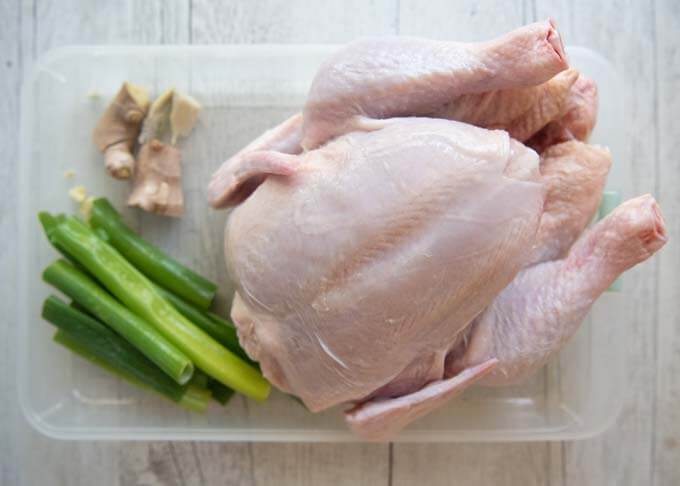 There are only 3 ingredients and water.

My chicken was 1.5kg/3.3lb. If your chicken is smaller/larger, you will need to adjust the other ingredients, and make less/more Chinese Chicken Broth. 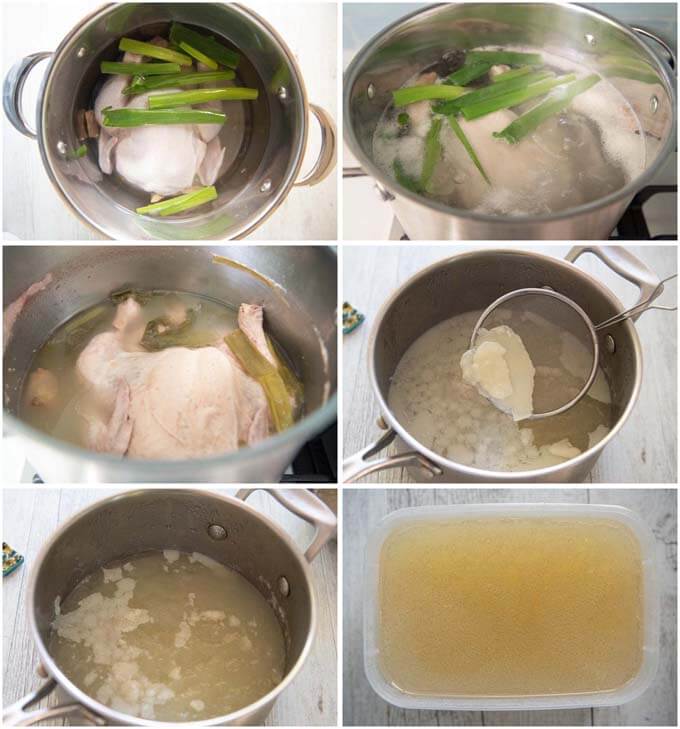 If the heat is too high, the water reduces too fast, exposing a large portion of the chicken above the water level too early. If this happens, add boiling water. When I turned off the heat, about 1/3 of my chicken was above water. I got 1.4L/3pt of Chinese Chicken Broth. You may have more or less quantity of the broth, but it doesn’t matter as long as the difference is not too large.

Unlike the chicken broth made from chicken carcasses, today’s broth accumulates a lot of fat on the surface of the broth. I think that it is better to remove a large portion of the fat. If you prefer to keep the fat, you can omit the steps 5 and 6. 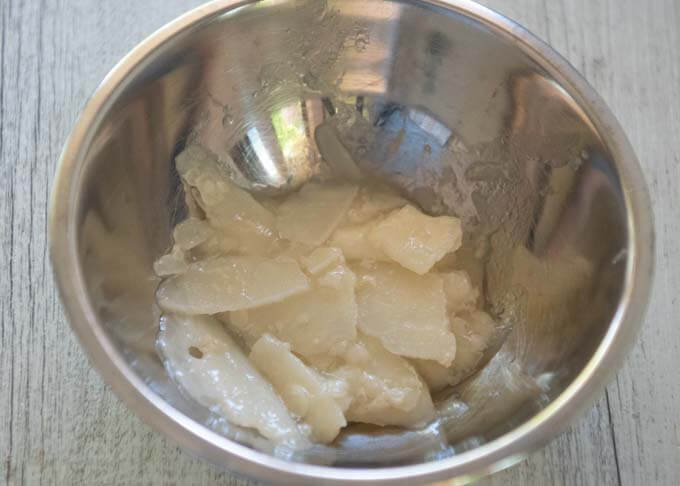 Fat removed from my broth.

If you are not using the broth within a day or so, transfer the broth into individual airtight containers after cooling it down and store them in the freezer.

Usage of Chinese chicken broth and the leftover chicken meat

As the title of today’s post suggests, it is the easiest Chinese Chicken Broth and it is pretty good for an easy broth. Because the broth does not have a strong flavour, not even salt, you can use it for any kinds of noodle soups as well as other soups. You just have to add flavours to the broth.

I am posting this simple recipe because I used this broth to make my Japanese-style Dan Dan Noodles (Tantanmen), which will be published next week. See the photo below. 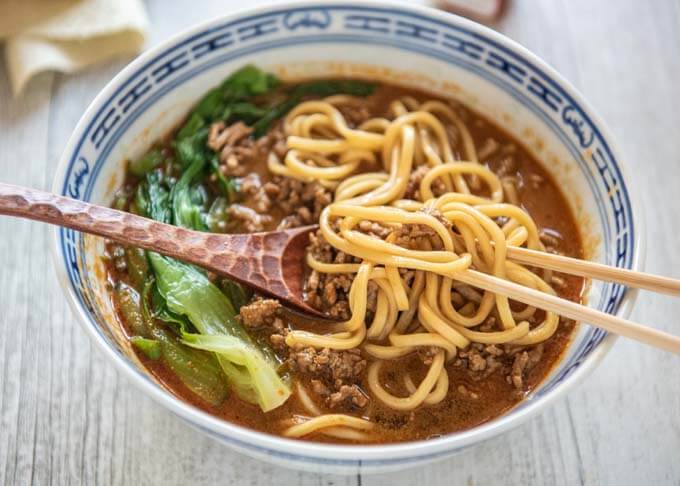 This broth is also perfect for Chanko Nabe (Sumo Wrestler’s Hot Pot), which uses chicken carcasses and konbu to make a broth. Replace the entire section to make Chicken Broth with today’s Chinese Chicken Broth, and add a piece of konbu to the Chanko Nabe Broth.

The chicken meat can be used to make salad, sandwiches, etc. The meat lacks the intensity of flavour, but it is full of protein. Use a small amount of the meat with a dressing, mayonnaise, or grated cheese, etc., to compensate for the lack of flavour.

The photo below is chicken and dried tomato spread that I made with the chicken meat left from the broth. 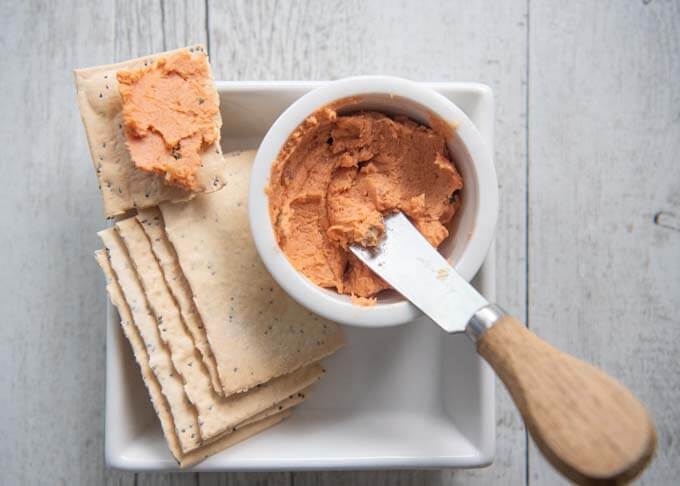 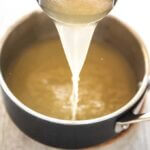 Chinese Chicken Broth does not use a lot of ingredients to make. You only need green onions and a piece of ginger. My Easiest Chinese Chicken Stock uses a whole chicken. Put everything together in a pot with a plenty of water and boil it for 3-4 hours. That’s all there is to it.

The quantity of chicken broth you can make is approximate, but you should be able to make enough for 3 servings of noodle soup.

1. My whole chicken was 1.5kg/3.3lb, but your chicken can be a bit smaller or larger. You just have to adjust the quantity of the other ingredients.

2. I used a 24cm/9½" stockpot to make my broth. 14 cups of water covered the whole chicken completely. It is ideal to use a pot that is not too large in diameter so that the water can cover the chicken.

If you only have a very large pot, you’ll have to add extra water and condense it at the end.

3. If the heat is too high, the water evaporates too fast, and you might find that a large portion of the chicken ends up above water level after a couple of hours of cooking. If this happens, add boiling water to cover most of the chicken and continue to cook.

4. When I finished cooking, about 1/3 of the chicken was above water.

5. Because this recipe uses a whole chicken, the broth accumulates a lot of fat. I think it is better to remove most of the fat (see the step-by-step photo in the post).

6. You can store the broth in the freezer for 2-3 months.