Thinly sliced Boiled Pork Belly with Vinegar-soy Sauce is a delicious dish. You can’t tell that it is just boiled pork. Chopped coriander/cilantro and green onion makes the dish so appetising, and it keeps well in the fridge and freezer. 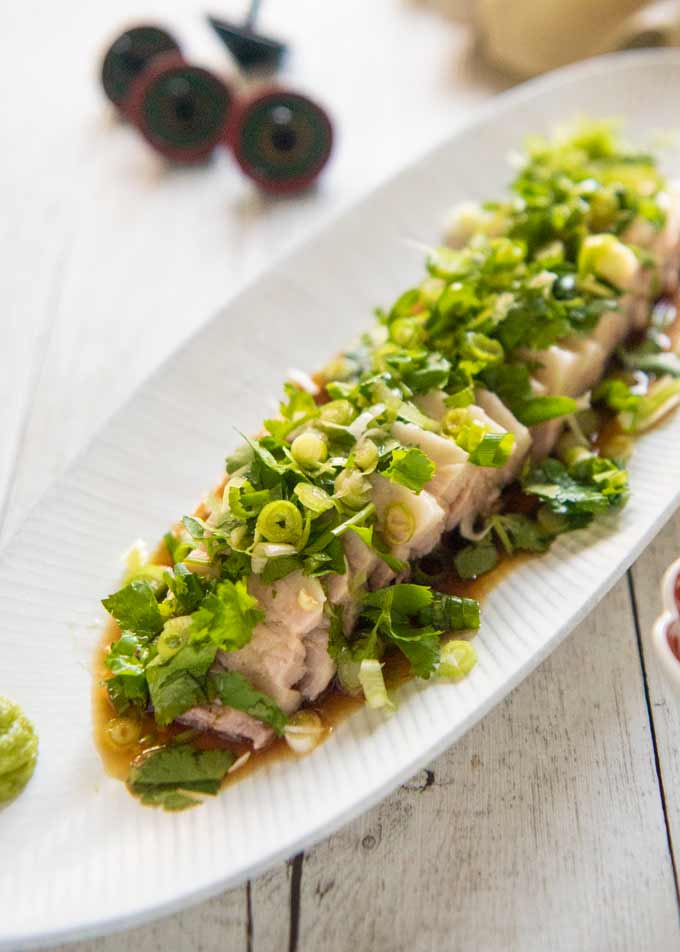 You can find recipes for Boiled Pork Belly on many Asian recipe sites. But what distinguishes my version from the other recipes is the sauce that is poured over the sliced pork. It is salty and sour, but by adding dashi stock to the vinegar-soy mixture, the flavour becomes mild with a dash of Japanese flair.

The cut of the pork does not have to be pork belly. It can be pork shoulder, for example. But pork belly is by far the most popular cuts of meat for a boiled pork recipe, and I think it is the juiciest.

What’s in my Boiled Pork Belly with Vinegar-soy Sauce 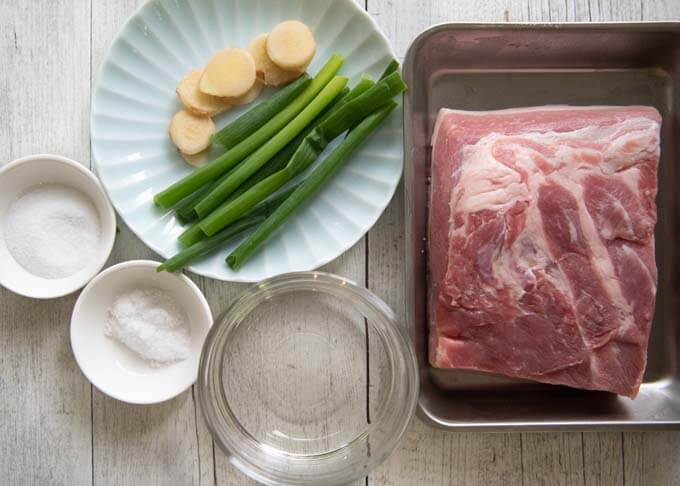 If you really have an issue with pork belly (some people do because of the bands of fat), you can use another cut of pork such as pork shoulder or pork neck/butt. But the boiled meat will not be as juicy as pork belly. 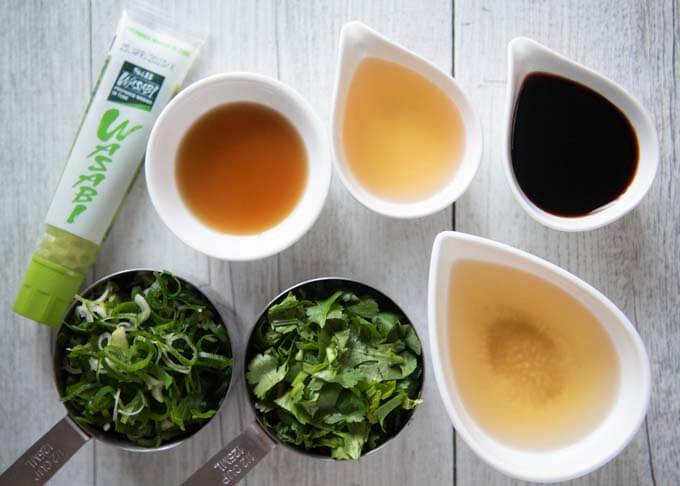 Although coriander/cilantro is not a traditional Japanese ingredient, it gives a refreshing touch to the dish, and I like it. But even if you just use green onions, the dish tastes great.

Wasabi is optional but you will be surprised to learn that it goes so well with the Vinegar-soy Sauce.

How to Make Boiled Pork Belly with Vinegar-soy Sauce

Thinking about how to slice the pork when serving, I halved a large block of pork belly lengthwise. This made it easy to pick up a slice of pork and to eat it. 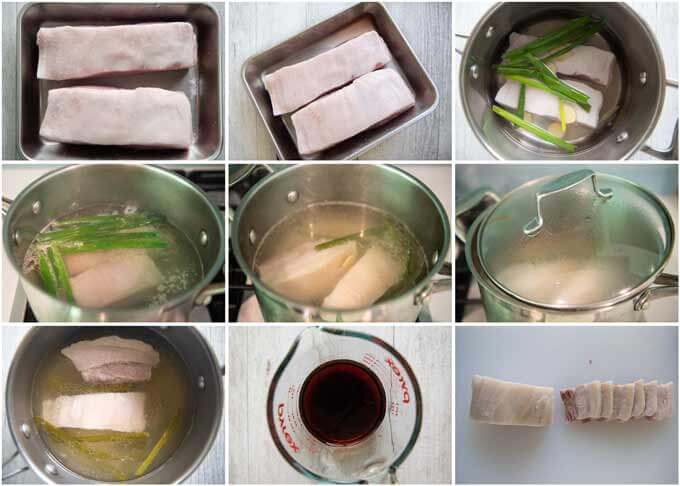 Before boiling the pork belly, you need to marinate the pork with salt and sugar over night. This makes the pork tender and moist. It also injects the flavour into the flesh. You will see some liquid collected beneath the pork pieces (see the second photo in the step-by-step photo above).

Boiled Pork Belly keeps well in the fridge for 3-4 days. It is best to store the pork in the broth and slice it at the time of serving. You can also freeze it for a few weeks, without the broth. 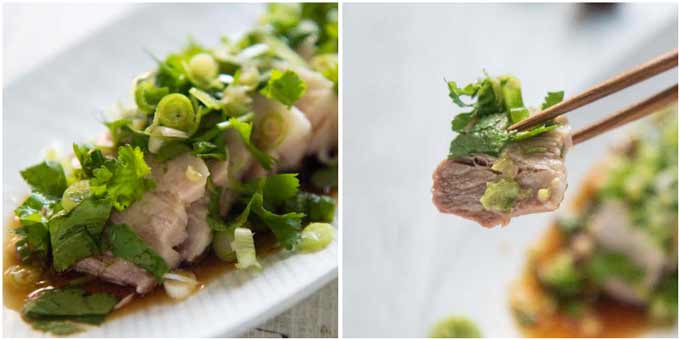 The boiled pork belly has a slight salty flavour from marinating it overnight. If you are very sensitive to the saltiness, you may even find that you can eat the pork without much sauce added to it. Since it was boiled with minimum flavouring, you can use it in many ways.

To name a few: 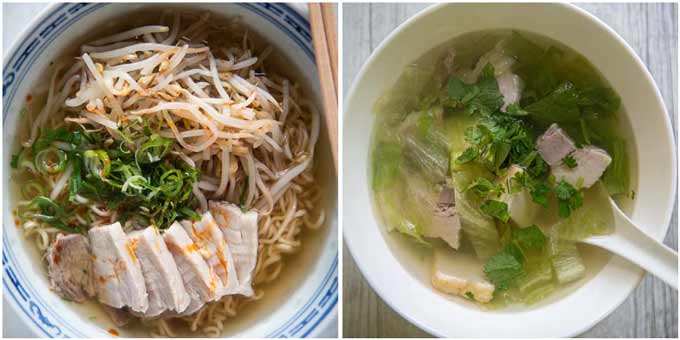 You can make so many different arrangements with just a piece of Boiled Pork Belly! 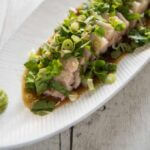 Thinly sliced Boiled Pork Belly with Vinegar-soy Sauce is a delicious dish. You can’t tell that it is just boiled pork. Chopped coriander/cilantro and green onion make the dish so appetising. (Watch the video)

2. Depending on the dimension of the pork pieces and the size of the pot, the amount of water required varies.

3. The quantity of sauce is generous and more than is required to pour over the pork. The idea is to serve the remaining sauce as a dipping sauce.

Instead of Vinegar-soy Sauce, you can use gomadare (sesame sauce) if you wish. You can find the recipe for Gomadare in Japanese Dressings. But I must say I like the Vinegar-soy Sauce better as it makes the dish somewhat light.

4. You can have just one of them if you prefer.

5. The time required to cook the pork varies depending on the thickness of your pork. I cooked for 1 hour, and the pork was very tender. 50 minutes would have been OK too.

Be careful not to overcook it as the flesh breaks down when you slice the meat.

6. Pork pieces slightly curl up when heated, resulting in the top part of the pork appearing above water. Evaporation of the water also makes the pork appear above the water. If the water level becomes lower than the top of the piece of pork, add boiling water to submerge the pork in the water.

7. You will get a very good broth from boiling the pork, which is perfect for a ramen broth. It is very similar to the broth for Okinawa Soba (Sōki Soba).

I put the broth through a sieve to remove the vegetables and scum. Then chill it in the fridge to solidify the excess fat on the surface, so that you can remove the excess fat easily. You can of course retain some fat if you prefer a rich broth.

8. Boiled Pork Belly keeps well in the fridge for 3-4 days. It is best to store the pork in the broth and slice it at the time of serving. You can also freeze it (without broth) for few weeks.

9. Nutrition per serving, assuming that a half of the sauce is consumed. Total fat should be slightly lower than the figures below because some fat renders out to the boiling water.

Boiled Pork Belly is served with quite a lot of Vinegar-soy Sauce, which leaves you with a strong soy flavour on your palate. So, I picked side dishes that have a light flavour with little to no soy. A dish with a sweet flavour such as Dengaku is good too.

Since one of the side dishes use miso, I picked Pumpkin Surinagashi for soup. Alternatively, you can have a clear soup. 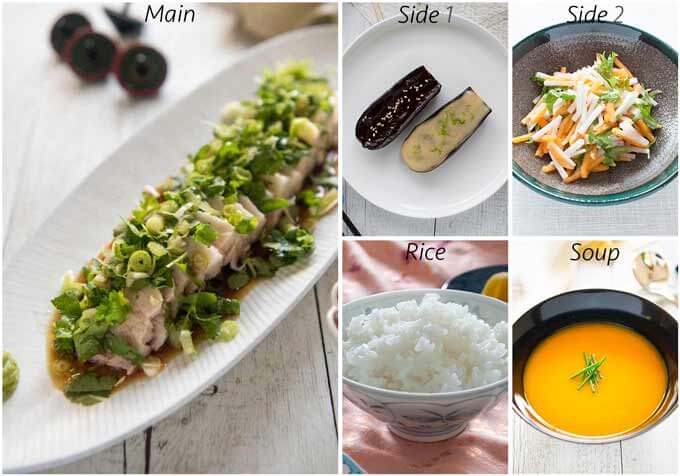