The hero of today’s dish, Tuna Sashimi Salad, is the garlic-flavoured sesame dressing. The salad can be made with any fresh salad leaves but including julienned daikon (white radish) gives a Japanese touch to the presentation of the salad. I used seared sashimi tuna, but the sashimi does not have to be tuna or seared. 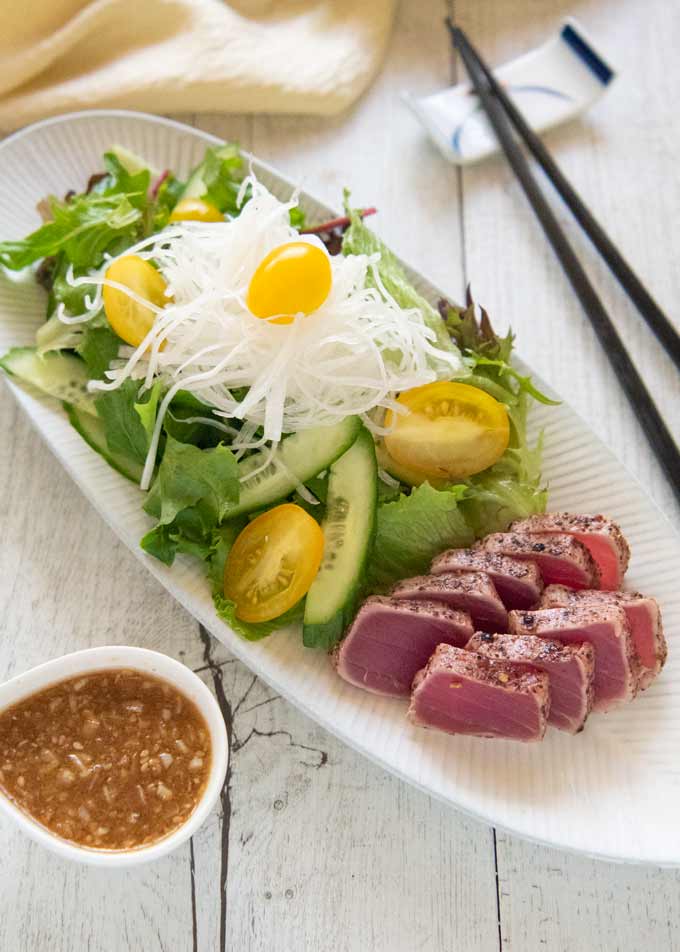 You can have salmon sashimi or white flesh sashimi such as Hiramasa kingfish or snapper. The dressing I used in this salad goes well with any of those.

I have a cookbook written by the world-famous Japanese chef, Nobu Matsuhisa. Many of the dishes in this cookbook are not home-cooking dishes, but they are great for special occasions. The presentations are magnificently artistic. 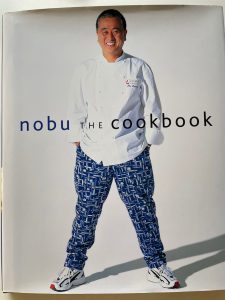 Some of the ingredients used in this cookbook are either too expensive (e.g. abalone) or too difficult to handle (e.g. live eel) for home cooking. But there are many techniques and food styling methods that I can learn from this book and I can apply them to even home-cooking dishes.

I particularly like the sauces and dressings in this book, which are easy to make. Most of them are not traditional Japanese flavours but they often have a Japanese touch and are made with unique combinations of ingredients. 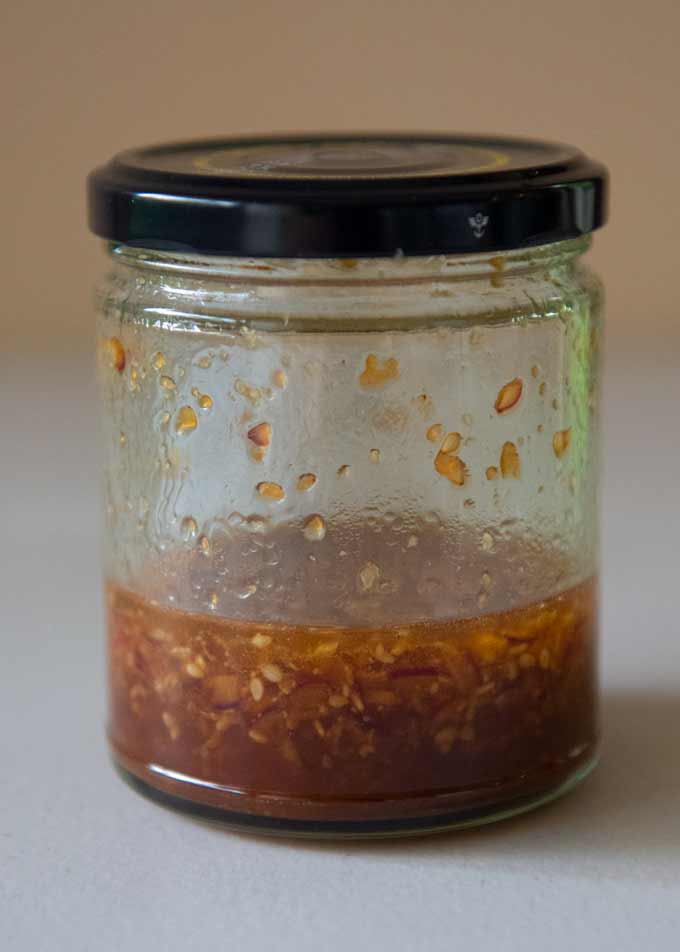 Although I started off using Nobu’s dressing recipe for Tuna Sashimi Salad, I don’t call my dressing ‘Copycat of Matsuhisa Dressing’.

Some people who have tried his dressing might disagree, but I did not enjoy Matsuhisa Dressing (sorry Nobu!) and I had to make adjustments to his dressing.

As you already know by now, I am very sensitive to the salty flavour. Most people might find his dressing perfectly seasoned, but I felt that the Matsuhisa Dressing was too salty and also oily for me.

After adjusting this and that, what I ended up with was quite far from Nobu’s dressing. Nobu’s dressing does not contain garlic but mine does, which makes my dressing farther away from the traditional Japanese dressings. But I really like it.

There are quite a few ingredients in this dressing but all of them are pantry staples for Japanese cooking, perhaps with exception of grapeseed oil. 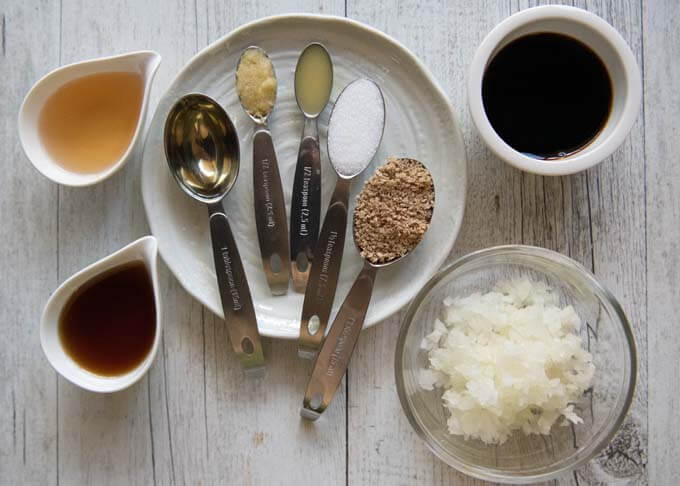 Grated apple is optional (and I forgot to include it in the ingredients photo above) but it makes the dressing milder.

The salad ingredients are very flexible, so I added alternatives next to some of the ingredients. 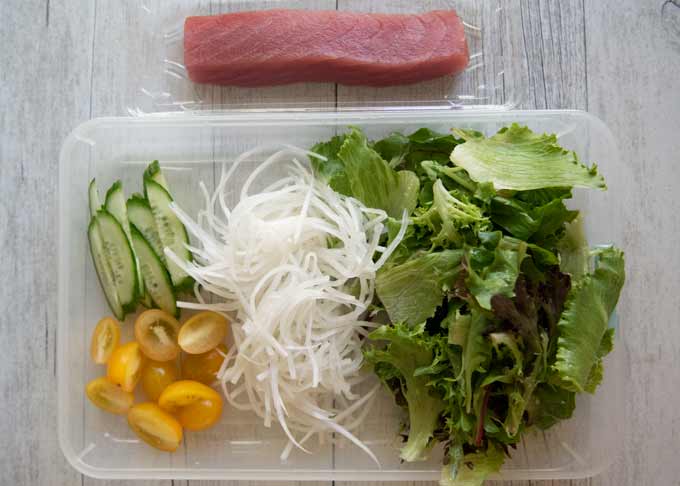 How to make Tuna Sashimi Salad

The seared sashimi tuna is made exactly in the way that is described in my post Tuna Tataki (Seared Tuna) with Ponzu. If you go to the section HOW TO MAKE TUNA TATAKI, you will find the detailed method of making tataki, including photos. The recipe card also has detailed steps to make tataki. So, I won’t repeat it here. 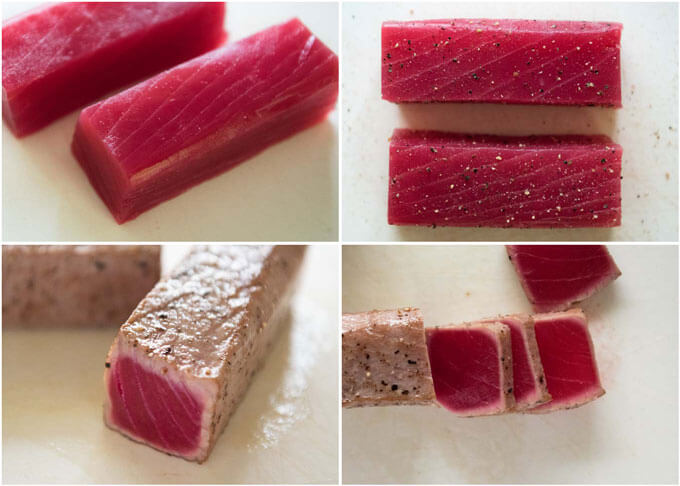 The most complex part of today’s salad is making Tuna Tataki, although you will find that it is not really complex. The rest of the instructions are very straight forward.

Nobu’s Tuna Salad is not plated in my way. He spreads the salad dressing on a serving plate first, then places the salad in the centre. Seared tuna pieces are rolled individually and placed around the salad. His Tuna Tataki pieces are obviously not square, so they can be rolled. 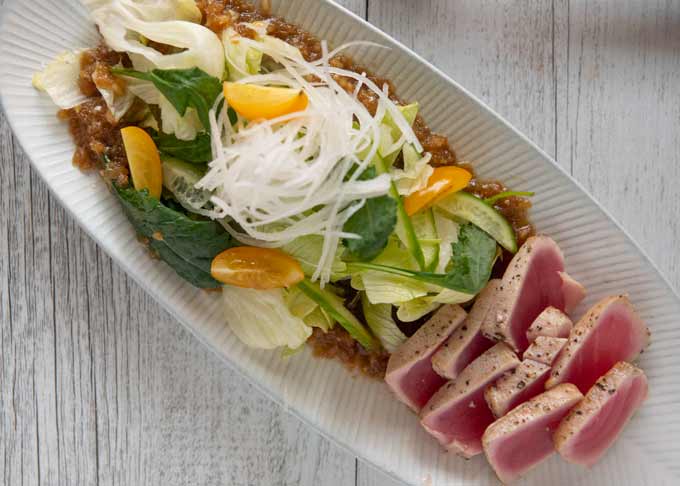 There is no single way of plating salad. You can be very creative. As long as it looks appetising, that’s all it matters.

Tuna Sashimi Salad with Garlic Sesame Dressing is a tasty and light salad that can become a main meal by adjusting the quantity of tuna. 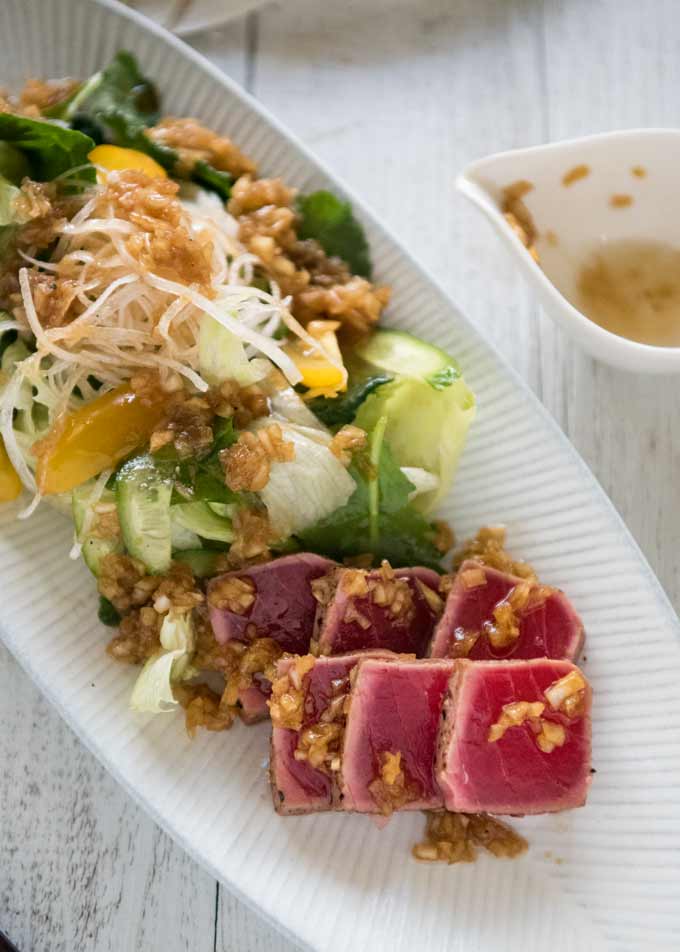 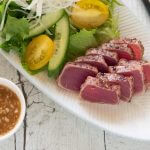 The hero of Tuna Sashimi Salad is the garlic-flavoured sesame dressing, which is inspired by the dressing made by the world-famous Japanese chef Nobu Matsuhisa, although mine does not resemble Nob's dressing at all.

The salad can be any fresh salad leaves but including julienned daikon (white radish) gives a Japanese touch to the presentation of the salad.

Instead of tuna, you can use sashimi quality salmon, kingfish, snapper, bonito, etc. I would not sear white flesh fish as you cannot create the stunning effect of the seared trimming around each piece. The thickness and the shape of the sashimi slices can also vary but do not make it too thick like standard sashimi.

2. The amount of pepper depends on how peppery you want the seared tuna to be.

If you have a slicer that can slice vegetables to 1.3-1.5mm / 1⁄16" thick, then slice a 10cm / 4" block of daikon. Pile the sliced daikon up neatly and cut the pile very finely lengthwise to make 10cm fine strips. I used this method today.

If you don’t have a slicer or julienne slicer, you can cut a narrow 10cm 4" long daikon block and use a peeler to make thin slices, then pile several slices together and julienne them.

4. Because I used a long plate, the plating was not symmetrical. There is no right or wrong when plating the salad and tuna.

Garlic and Sesame Dressing is a soy-based dressing, so I avoided main dishes with strong soy-flavour. I think Chicken Patties Wrapped in Shiso is perfect for that. You can also adjust the volume of the main dish depending on the amount of tuna sashimi in the salad.

Just to add a totally different flavour and texture to the meal, I picked Shira-ae for a side dish. 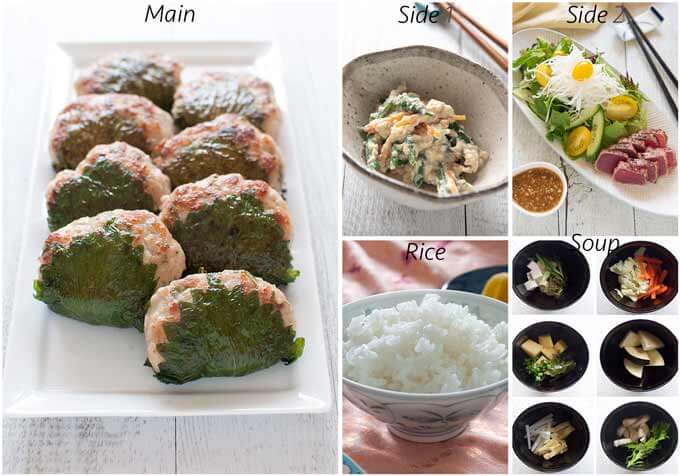