A simple side dish, Sautéed Potato with Shio Konbu has a unique flavour combination of butter and salted dried kelp. This is a perfect match of Western and Asian flavours. 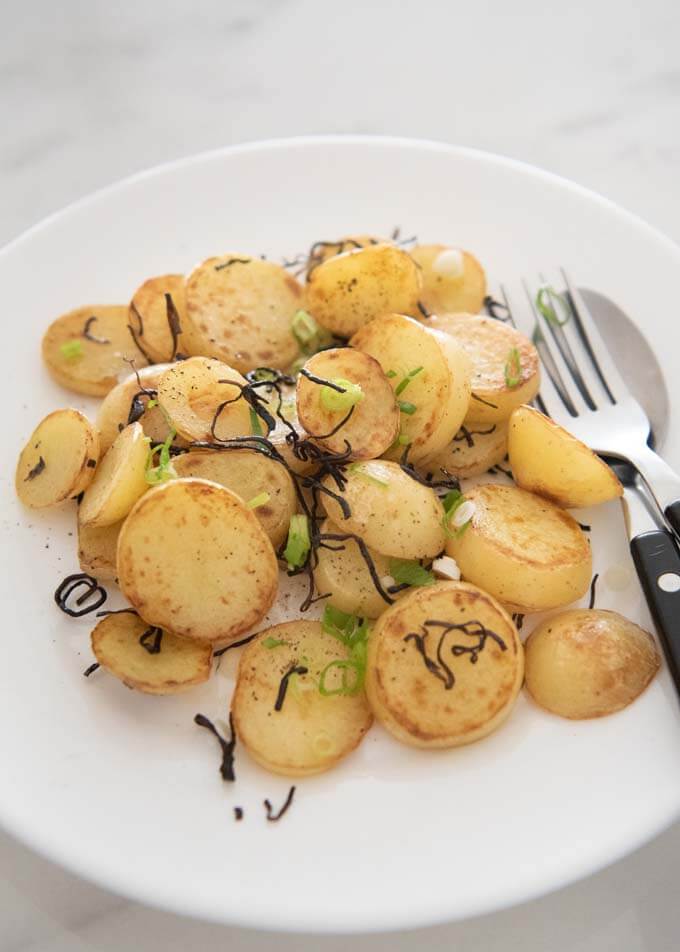 Instead of sautéing potatoes with herbs such as rosemary, garlic and/or chives, I sautéed potatoes with flavoured dried kelp (konbu). My Sautéed Potato is slightly salty and full of umami, which comes from the konbu strips.

Traditionally, shio konbu (salted dried kelp) is made from the kelp used to make dashi stock (so that the used kelp is not wasted). Used konbu is cut into small pieces and cooked in soy sauce and salt, sometimes with mirin or sugar.

Konbu has umami, and by cooking it in soy sauce (which also has umami) the umami in the konbu is further enhanced. That’s why shio konbu is very tasty. Although it is quite salty if eaten by itself. 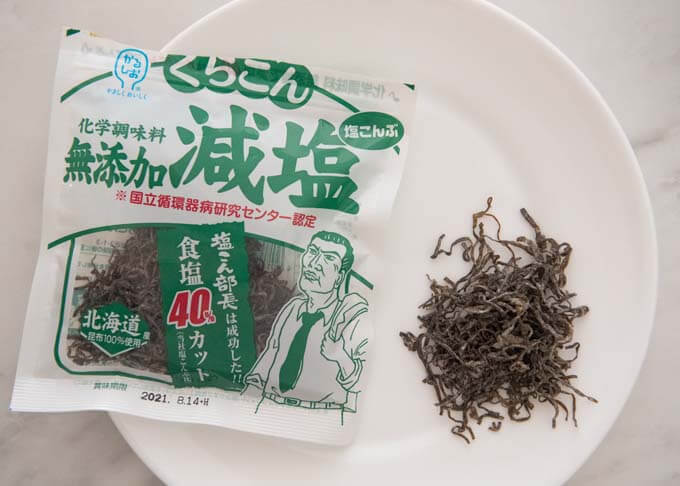 The shape of the kelp pieces can be either small and square, or thin strips like those in the photo above. The texture of the shio konbu can be slightly wet or very dry.

The dry shio konbu often comes with salt powder around it. In the case of the traditional method of making shio konbu, the amount of salt absorbed into the konbu is so much that the salt on the kelp crystallises and white salt powder surfaces when the kelp is completely dried.

But these days, the konbu does not contain an excessive amount of salt to allow for crystallisation of salt. Instead, the salt mixture is sprinkled over the dried kelp to look like the traditional salted kelp.

You can make shio konbu at home, but it is much easier to buy it from Japanese/Asian grocery shops. Most shio konbu sold at the grocery stores are dried konbu strips coated with white salty powder, which I used today. 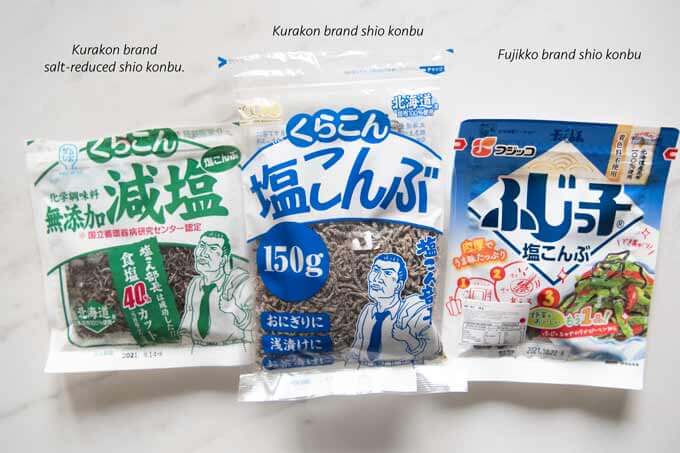 You might find that the wet shio konbu is also labelled as ‘konbu no tsukudani’ (昆布の佃煮), meaning simmered kelp.

People serve shio konbu as a side dish and a condiment for Japanese sweets. It is also used as a filling for rice balls, or as a topping on cooked rice.

What is in my Sautéed Potato with Shio Konbu

There aren’t many ingredients required to make today’s dish. The garnish is optional, but the specks of green on the potatoes make the dish look more attractive. 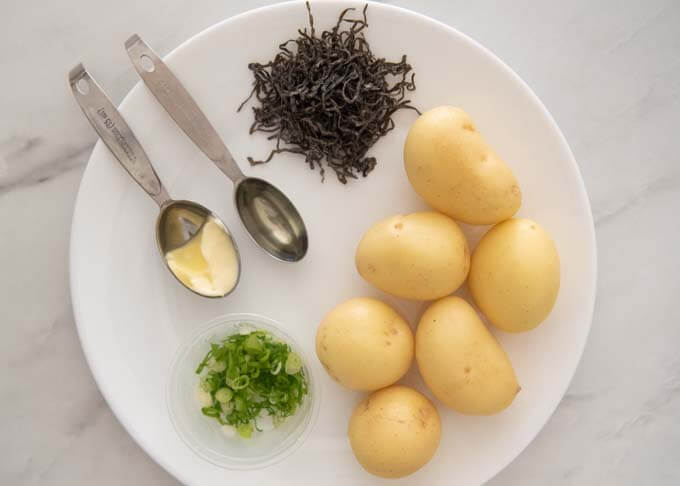 I used chat potatoes (baby potatoes) that were about 4cm / 1½” in diameter. If you are using large potatoes, halve or quarter them before slicing so that each piece becomes a bite-size piece.

How to make Sautéed Potato with Shio Konbu 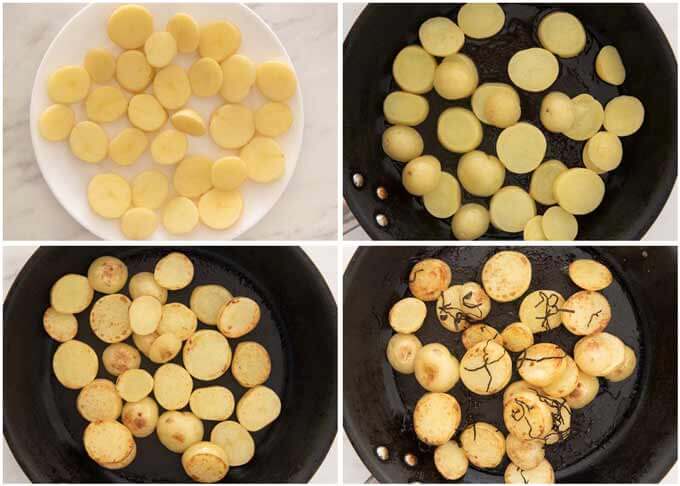 Potatoes should not be cooked too much in the microwave because you will sauté the potatoes after coking them in the microwave. If you feel that the centre of the potato pieces are slightly underdone, that would be just right.

The dish looks more appetising if the surface of the potatoes is slightly browned. 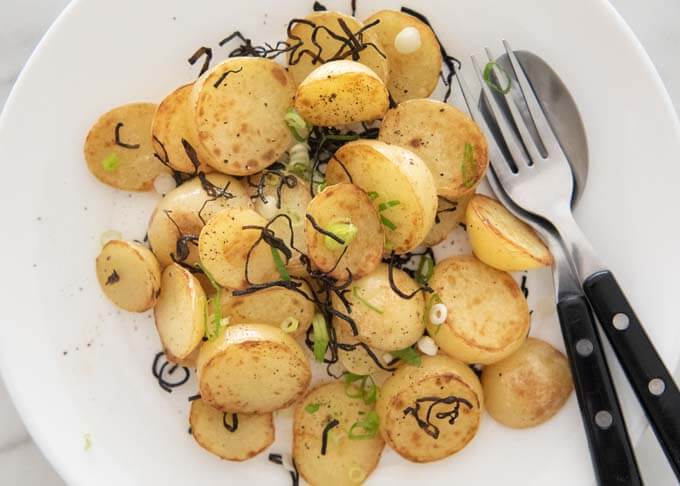 Shape of the potatoes: Some recipes cut potatoes into thick sticks or small cubes. There are no rules as to what shape the potatoes should be cut into, so be creative. But you probably don’t want each piece to be too large as the flavour does not penetrate the potatoes.

Cutting the potatoes into similar sizes is also a good practice so that they cook at the same time.

Adding Vegetables: You can add sliced Asian mushrooms such as shimeji mushrooms and king oyster mushrooms when sautéing the potatoes. The amount of shio konbu needs to be adjusted per the total volume of potatoes and mushrooms.

You could also add snow peas instead of (or in addition to) mushrooms, like the dish below. Then the dish will look more colourful and attractive. Having said that, I actually like the way it is without other vegetables.

Sautéed Potato with Shio Konbu keeps 2-3 days in the fridge. Serve at room temperature or hot by reheating in the microwave. 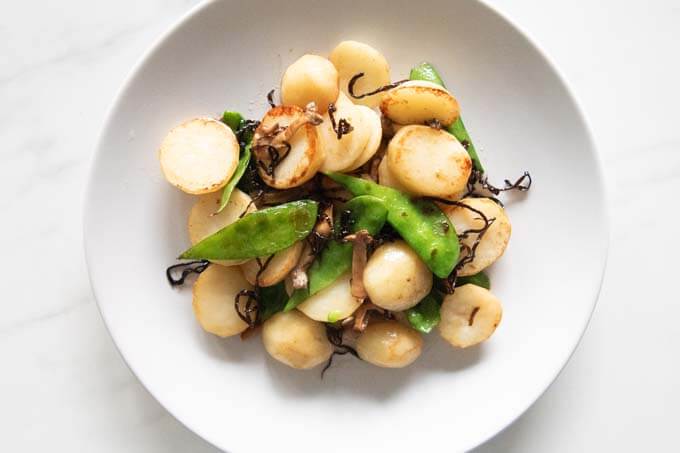 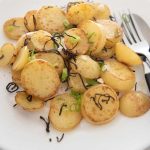 As simple side dish, Sautéed Potato with Shio Konbu has a unique flavour combination of butter and Shio Konbu (salted dried kelp). This is a perfect combination of flavours, developed by combining the Western and Asian ingredients.

1. In Australia, baby potatoes are sold as chat potatoes and I used 6 of them. I used small potatoes so that each slice becomes a disc-shape. You can use large potatoes as an alternative - you'll need to halve it or quarter them before slicing.

3. You might find that shio konbu is quite salty, particularly if it is not salt-reduced, and mixing it with salted butter might make the potatoes too salty (depending on your palate). To overcome this problem, you may use unsalted butter and adjust the saltiness by adding salt.

4. The cooking time varies depending on the size of the potato pieces. After 2 minutes, poke a potato with a skewer and see how far the skewer can get through and adjust the cooking time.

5. Sautéed Potatoes keeps 2-3 days in the fridge. Serve at room temperature or hot by reheating it in microwave.

Sautéed Potato with Shio Konbu (Salted Dried Kelp) is not a traditional Japanese dish. Although the flavour has a Japanese touch, the potatoes are sautéed like a similar Western-style dish. So I decided to match it with a Western-style light main dish with a Japanese dressing – Baked Salmon in Foil with Ponzu Dressing.

Given that today’s side dish is mainly carbohydrate, you want lots of vegetables for Side 2. For Soup, I picked Dried Tofu Skin Soup to go with the meal, which can be either miso soup or clear soup. 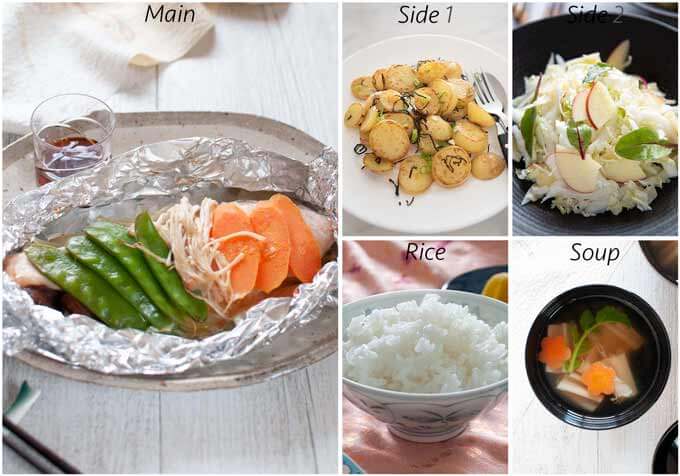