Grated Mountain Yam is a quick and delicious side dish made simply by grating a mountain yam and pouring it over an ingredient. Mountain yam is a long, slender root vegetable and when grated, it turns into something quite unexpected and unique, with a very sticky and slimy texture. 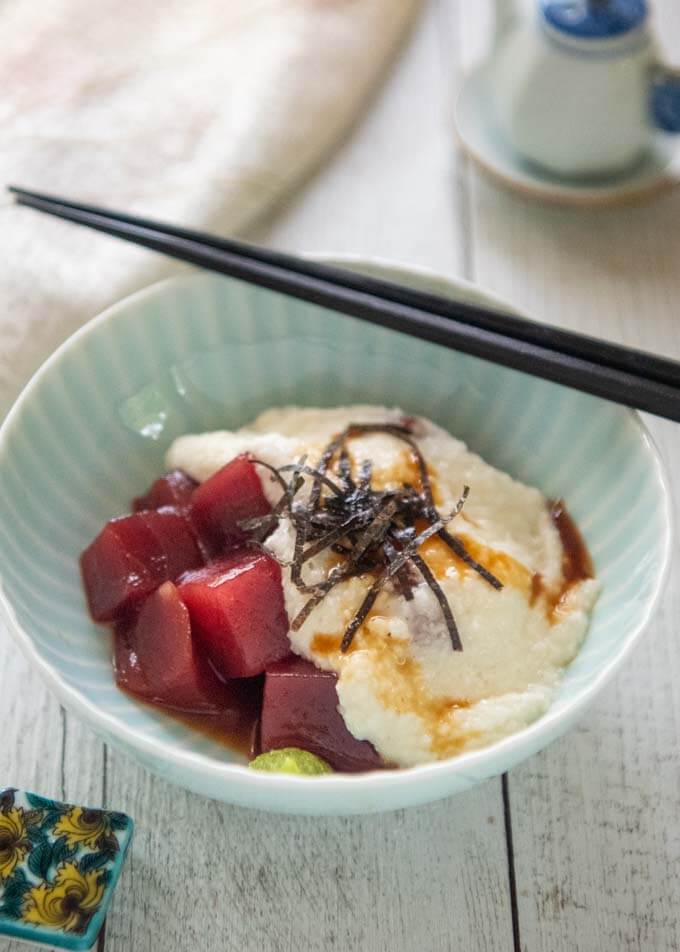 I decided to post yet another mountain yam recipe shortly after Sautéed Mountain Yam so that you can enjoy a few different dishes using mountain yam before the season is over in Australia.

Japanese people are very good at expressing sound, appearance, and texture using repeated sounds or words. It is called onomatopoeia in English. But in the case of Japanese onomatopoeia, it often uses the same sounds/words twice, which is a bit different from the English onomatopoeia. Repeated words/sounds are usually written in Katakana.

For example, ‘ting-a-ling’ or ‘jingle’ are the words for expressing the sound of a gentle bell in English. But in Japanese, it is ‘rinrin’ (リンリン or りんりん). The state of glittering is expressed as ‘giragira’ (ギラギラ or ぎらぎら) or ‘kirakira’ (キラキラ or きらきら) depending on how strongly the object is shining and sparkling. The strong sun shine in summer is ‘giragira’,  and the shining stars are ‘kirakira’. 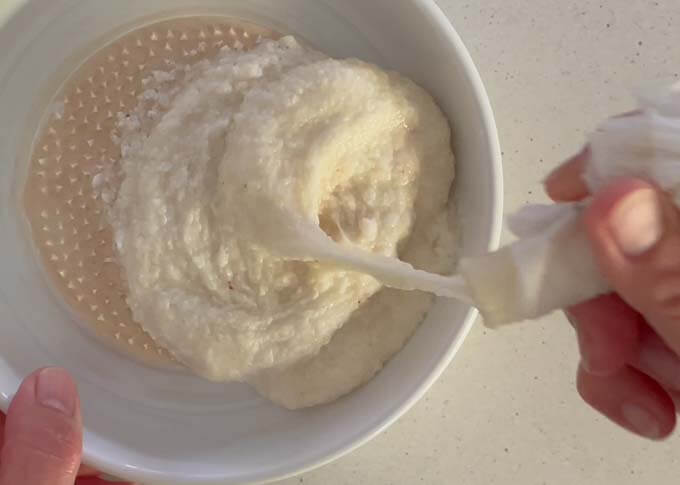 The Japanese name for Grated Mountain Yam, tororo came from the word for soft and slimy texture, torotoro. The word ‘tororo’ is also used for the shaved kelp called tororo konbu, which I used in my Hiroshima Okonomiyaki recipe, because it becomes soft and slimy when put in liquid.

Traditional tororo dishes are so simple to make that I decided to post two popular recipes using grated Mountain Yam: 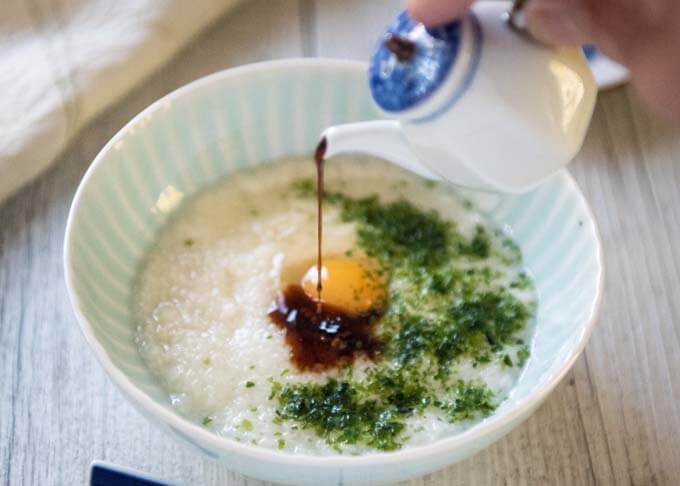 Although tororo is poured over the tuna, today’s dish is not called tororo in Japanese. It is called ‘maguro no yamakake’ (マグロの山かけ). ‘Maguro’ (マグロ)  means tuna and ‘yamakake’ (山かけ) translates to mountain yam poured over something. Yamakake is made up of two words – mountain (‘yama’, 山) and pour (‘kakeru’, かける). The word  ‘no’ (の) is something like ‘with’ in this context.

There are two totally opposite ways of making Maguro no Yamakake.

I used Method 1 for today’s recipe.

WHAT’S IN MY GRATED MOUNTAIN YAM on tuna

The best part of today’s dish is the flavour combination of marinated diced tuna and sticky grated mountain yam. 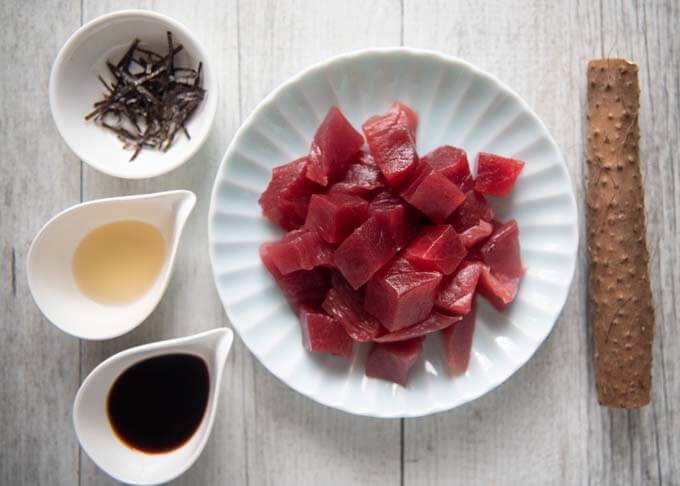 You need to use a very fine grater to make tororo. I used a Japanese round ceramic grater, but a microplane grater or the finest side of a square grater works fine too.

A knob of wasabi paste gives you an extra dimension to the flavour, but you can omit it if you prefer.

HOW TO MAKE GRATED MOUNTAIN YAM on tuna

It’s really easy to make but I made a video for this. 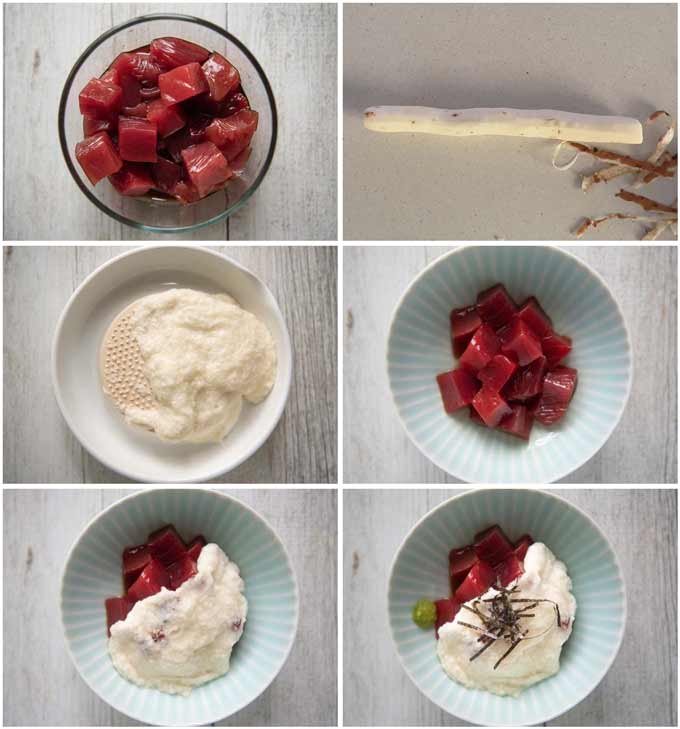 Depending on the type of yam you use, grated mountain yam sometimes becomes brownish as you grate it. The change of colour is caused by the oxidation of an enzyme called polyphenol oxidase. You can prevent oxidation to a certain degree by leaving the peeled yam in vinegar water (1 tablespoon vinegar in 2 cups water) before grating it. 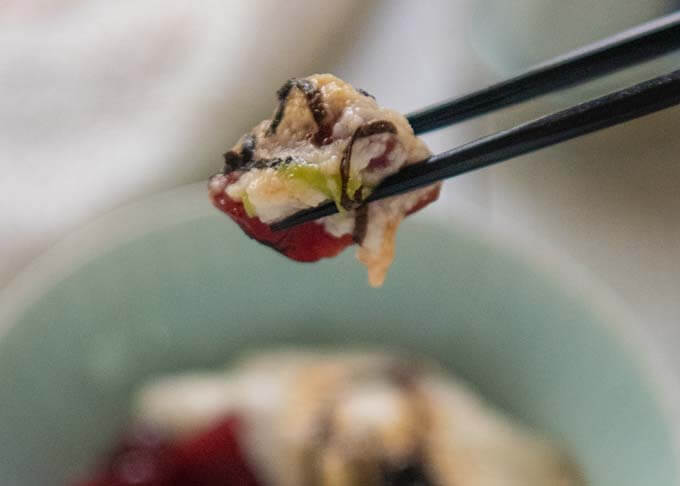 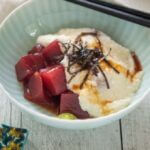 Grated Mountain Yam ('tororo' in Japanese) is a quick way of making a delicious side dish by simply grating a mountain yam and pouring it over an ingredient. Maguro no Yamakake is a popular dish because it is so easy to make and tasty. Just pour tororo over a pile of marinated tuna pieces with a bit of garnish on top. Simple but so delicious. Watch the video.

2. Instead of kizami nori, you can use aonori or finely chopped chives.

3. I put a knob of wasabi paste on the side of the bowl so that you can omit wasabi if you prefer not to have it. If you are happy to have wasabi, you can dilute wasabi in the marinade as an alternative method. This method is probably easier if you are going to mix wasabi into the ingredients.

4. The peeled flesh of mountain yam is very slippery. I use a piece of kitchen paper to hold the peeled yam root. This stops the yam root slipping from your hand when holding it.

Depending on the type of yam you use, grated mountain yam sometimes becomes brownish as you grate it. The change of colour is caused by the oxidation of an enzyme called polyphenol oxidase. You can prevent oxidation to a certain degree by leaving the peeled yam in vinegar water (1 tablespoon vinegar in 2 cups water) before grating it.

5. Alternatively, add some marinade to the bowl when the tuna pieces are placed in it so that you don’t need to pour the marinade over the yam.

The marinade has a quite strong soy-flavour, so don't pour too much.

6. Nutrition per serving. It assumes you consumed all the marinade with yamakake, which is unlikely.

The most popular combination of main dish to go with Maguro no Yamakake is Tempura. Given that the time required to make yamakake is so short, I thought it would be OK to go to a little extra effort to cook Tempura. You can also control the volume of the main dish easily.

I think that miso soup is best suited for yamakake, and soba noodles can be a good alternative to the rice. 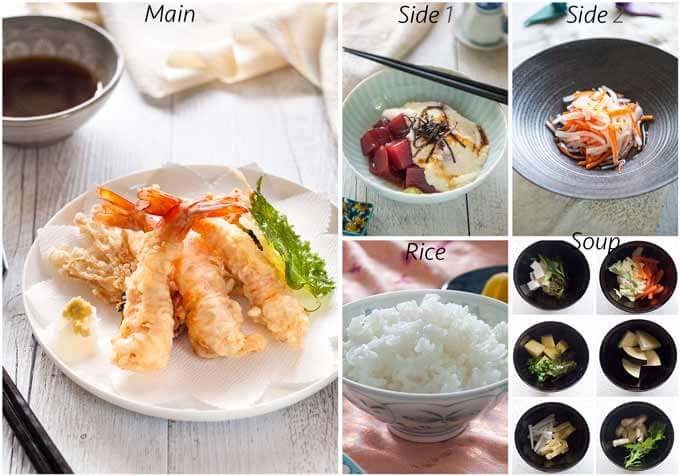