Chicken Rolls Stuffed with Vegetables is a very visually attractive dish. Colourful vegetables are placed in the centre of the chicken roll. The sweet teriyaki sauce coating the chicken makes this dish so tasty. 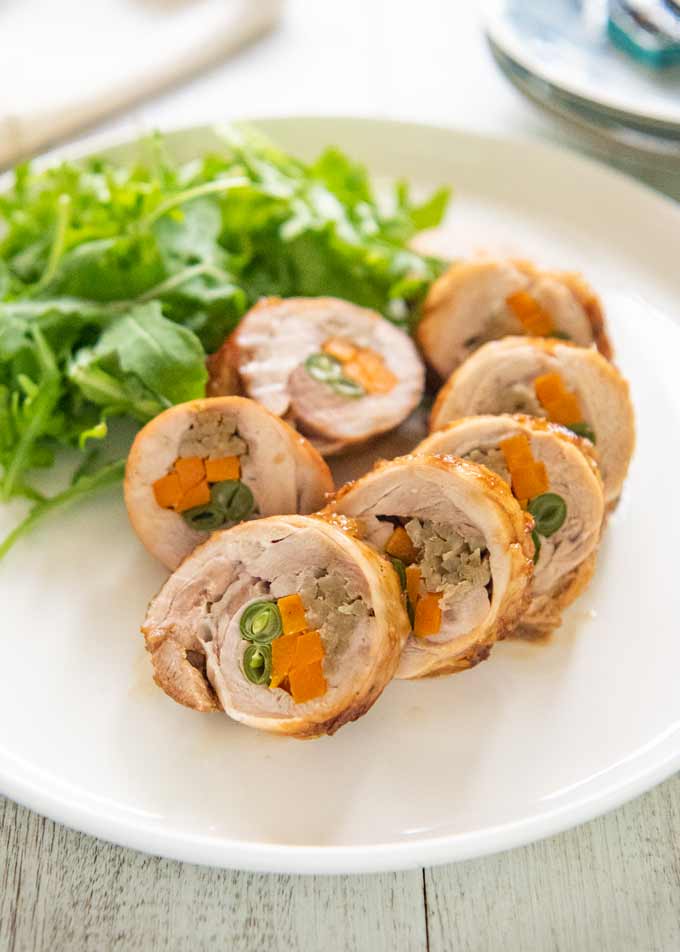 Chicken Rolls Stuffed with Vegetables is often served at New Year’s feasts. The original dish, Yawata-maki, is made with either eel or conger eel fillet, instead of chicken. Burdock sticks are wrapped in eel fillets and cooked with a sweet soy-flavoured sauce.

The traditional Yawata-maki (八幡巻) is a local specialty of Yawata city in Kyoto. The name of the dish came from the fact that Yawata district is famous for burdock as well as wild-caught eel.

To make the dish more appealing, colourful vegetables are also added. A typical combination of vegetables is burdock, carrot, and green beans, which is exactly what I used in my recipe. 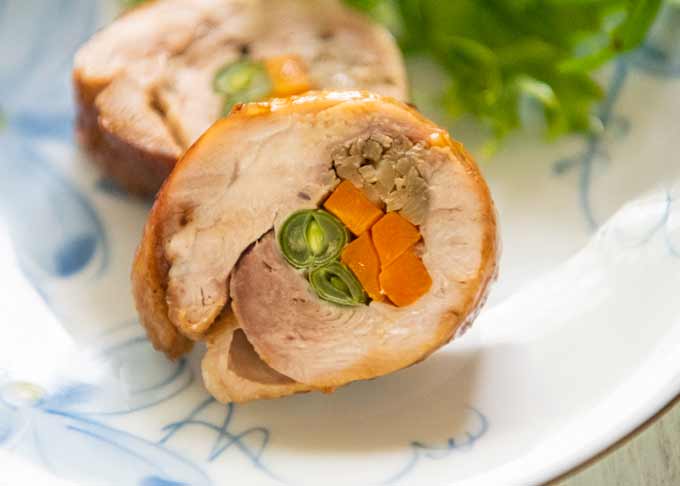 You don’t have to have all these vegetables. People often use just burdock to be close to the original Yawata-maki. You can just have two kinds of vegetables, e.g., burdock and carrot.

What is in my Chicken Rolls Stuffed with Vegetables

In addition to the meat and vegetables, you need two different sauces – the sauce to pre-cook vegetables and the sauce to add flavour to the chicken rolls, which I call ‘tare’. 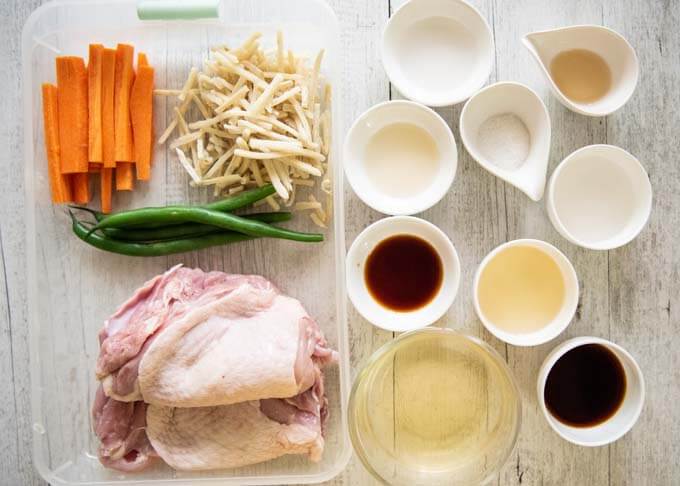 My whole chicken leg came with bones, so I had to debone it myself. Where I live, it is not easy to find a chicken leg fillet. I think chicken leg works better than breast as the leg fillet is juicier when cooked, but you can use a large breast fillet instead. You need to butterfly the breast fillet as it is otherwise too thick and small to roll.

I could not find a fresh burdock root since it is not in season here in Australia, so I used frozen burdock sticks that were cut for Kinpira Gobō.

As mentioned in the previous section, you don’t need to have all the vegetables listed here. But these are by far the most commonly used vegetable combination for this dish.

The photo below is the chicken rolls I made with parsnip (instead of burdock), carrot and green beans. The parsnip was a bit bitter compared to burdock, but the appearance is similar when cooked. 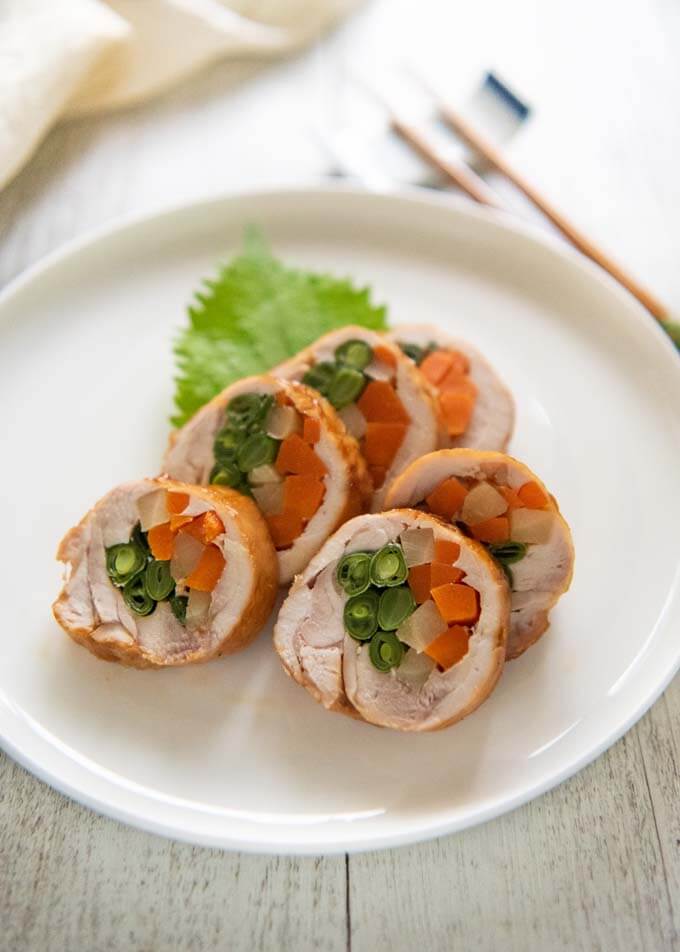 Because the flavouring for the chicken is added at the end after rolling the vegetables inside the chicken, some vegetables need to be pre-cooked with a simmering sauce.

I added vinegar to the tare to give a slightly different flavour to the teriyaki sauce used for Teriyaki Chicken. If you prefer, you can use the standard teriyaki sauce. 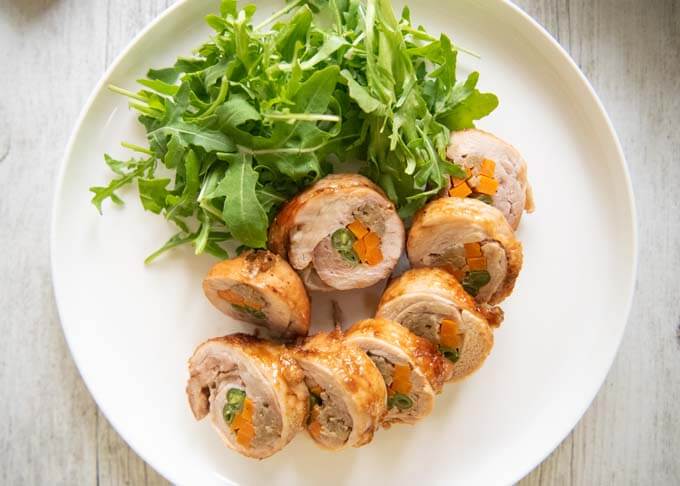 How to Make Chicken Rolls Stuffed with Vegetables

There are many different ways of cooking chicken rolls. In this recipe, I wrapped the chicken rolls in aluminium foil, then baked them in a frying pan with a lid on. Some recipes secure the chicken roll with a butcher’s twine, then brown the surface of the roll. but I think that wrapping the roll in foil keeps the meat moist. 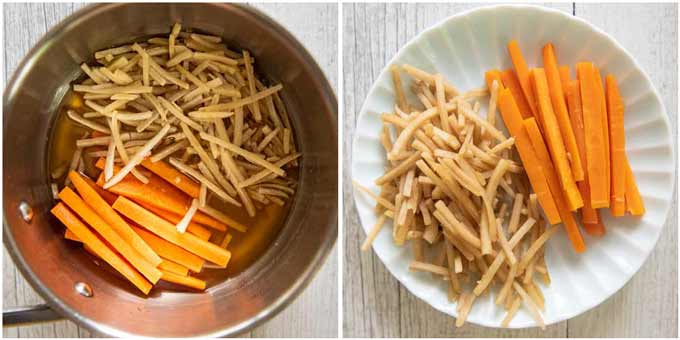 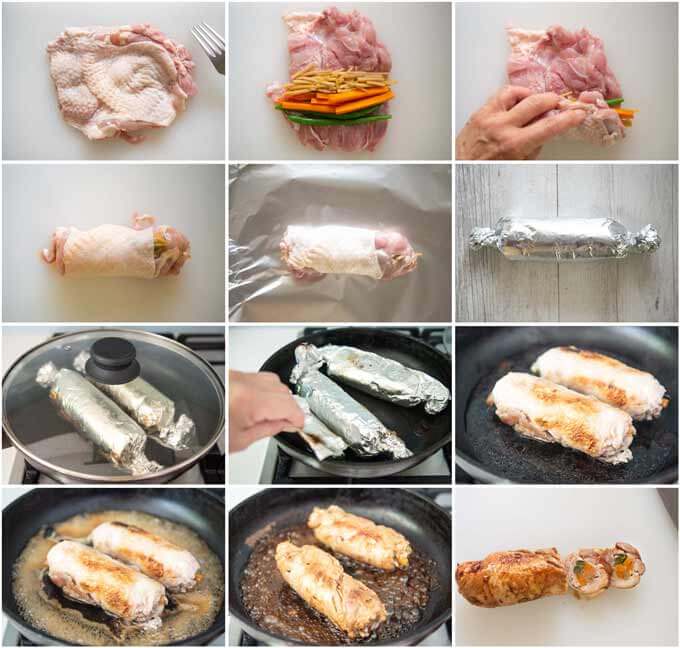 I condensed the tare until it almost evaporated, so that the chicken was coated with a thick sauce. Alternatively, you can turn the heat off earlier leaving some sauce left so that you can pour over the sliced chicken when serving.

Yawata-maki can be served as a main dish, a side dish, or an appetiser. It keeps about 5 days in the fridge, and you can freeze sliced Yawata-maki for up to one month. 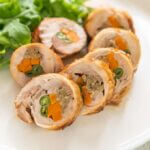 Chicken Rolls Stuffed with Vegetables is a very visually attractive dish. Colourful vegetables are centred and rolled in a chicken fillet. The sweet teriyaki-flavoured sauce coating the chicken rolls makes this dish so tasty.

1. The whole leg of chicken is called chicken Maryland in Australia, but in the US, it is a quarter chicken, i.e., whole chicken leg with the thigh and the drumstick portion together.

I used fillets of about 250g/0.4lb each with skin on. The skin gives the dish more flavour but fillets without skin is OK too.

Like me, if you can only find a leg with the bone in, I am afraid you will need to remove the bones. Check out one of the YouTube demonstrations of How to Debone a Chicken Leg and Thigh.

You can use breast fillet if you prefer, but the cooked chicken might be a bit dry. You need to butterfly the entire breast fillet by cutting it horizontally so that the fillet becomes thinner and the surface area larger.

2. If you can find a fresh burdock root, that is great. Burdock is not in season where I live at the moment, so I used frozen burdock that was cut into matchsticks suitable for Kinpira Gobō.

3. Try to shape the fillet to become square or rectangle. This makes rolling of the fillet easier.

4. It doesn’t have to be a 120 degree-turn. You just want to turn them so that the surface of the chicken gets cooked more evenly. If you are turning more frequently, the cooking time between the turns need to be reduced, i.e., total cooking time is about 17 minutes.

5. I condensed the sauce until the sauce became sticky. If you prefer, you can turn off the heat earlier, leaving some sauce so that you can pour it over when serving.

I decided to serve Chicken Yawata-maki as a main dish today. It gives you bright colours without adding other dishes, so you can pick dishes purely based on the flavour and texture combinations.

My side dish choices are Renkon no Hasami Age and and Watercress Salad. Soup can be either miso soup or clear soup. 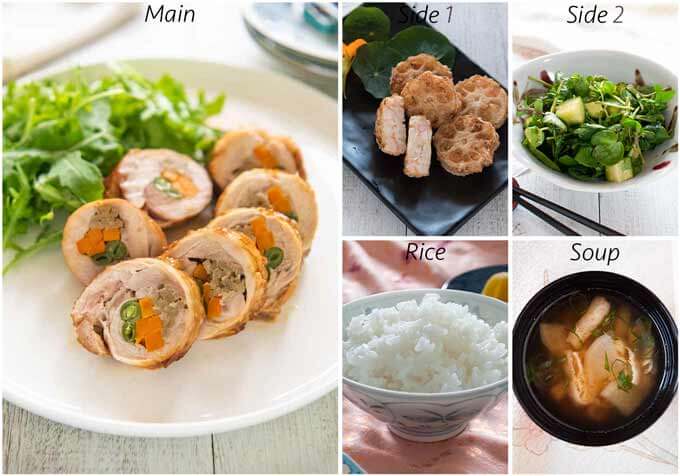