Candied Sweet Potato is a simple Japanese snack food. Bite-sized sweet potato pieces are deep-fried, then tossed in a sticky syrup. The sweet potatoes are crunchy on the outside and fluffy on the inside. They’re so delicious that you won’t be able to stop eating them. 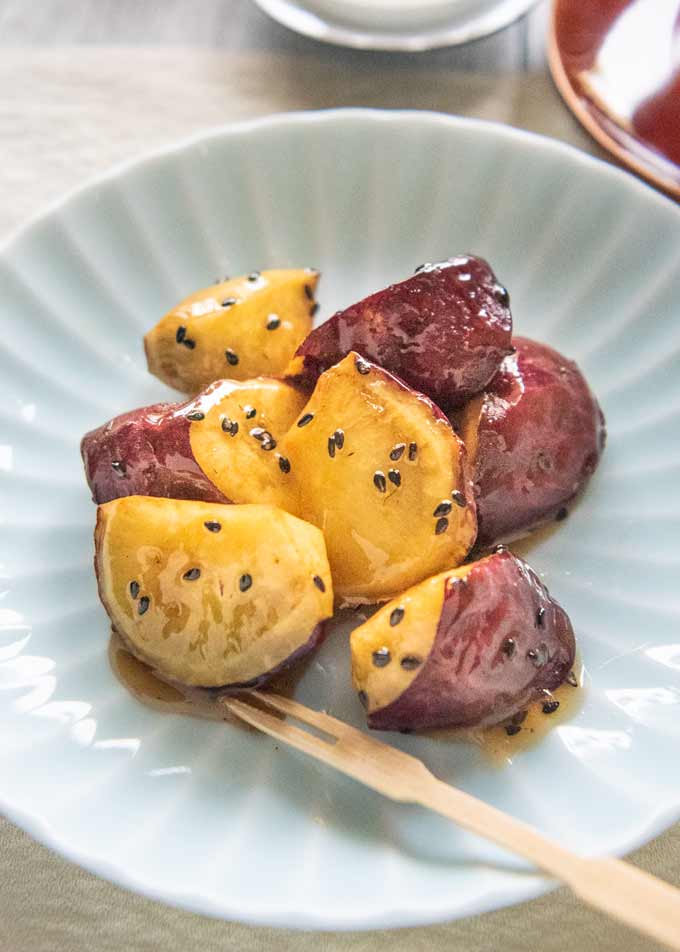 Candied Sweet Potato (Daigaku Imo) is mainly consumed in the eastern part of Japan, particularly in the Kanto region of Japan which includes Tokyo and surrounding prefectures.

As you can imagine from the name of the dish, it is a very sweet dish and the majority of Japanese people consider this as a snack food. But, people in Ibaraki prefecture, which is one of the Kanto region prefectures, people serve Daigaku Imo as a side dish to go with a bowl of rice. It’s probably because Ibaraki is the first place of the sweet potato harvest in Japan.

Although you need to deep-fry, I can assure you that this is an easy sweet potato recipe. And it goes so well with green tea! 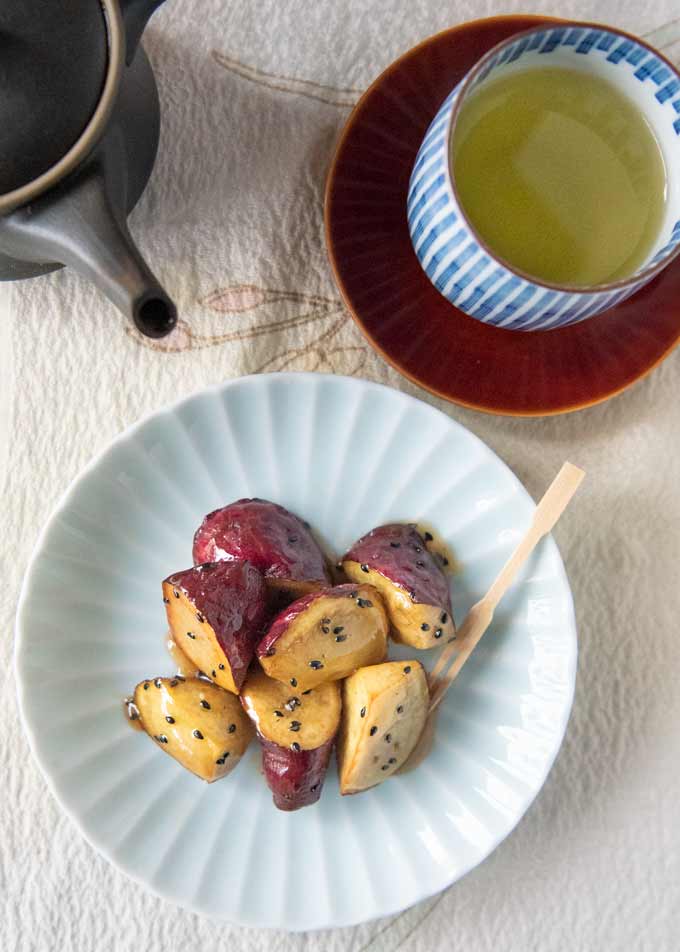 The name of this dish is quite unique because Daigaku Imo (大学芋) means university potatoes (‘daigaku’, 大学 + ‘imo’ 芋). But the dish does not resemble anything associated with university.

There are a few stories about how the name of this snack came about and all of them relate to university.

Story 1: In the Taisho and Shōwa periods, students from the universities near Tokyo/Kanda stations, where many universities are located, loved this sweet snack. Since the snack was loved by the university students, it is called Daigaku Imo.

Story 2: In the early Shōwa period, university students from the national university called Teikoku University (now Tokyo University) cooked Candied Sweet Potatoes and sold them to make money to pay for the uni fees. Since sweet potatoes were cheap, it was probably a good way of making money.

Story 3: There used be a potato shop called Mikawaya (三河屋) in front of the famous red gate of Teikoku University. Mikawaya was selling potatoes tossed in thick sugar syrup and they were popular among the university students. 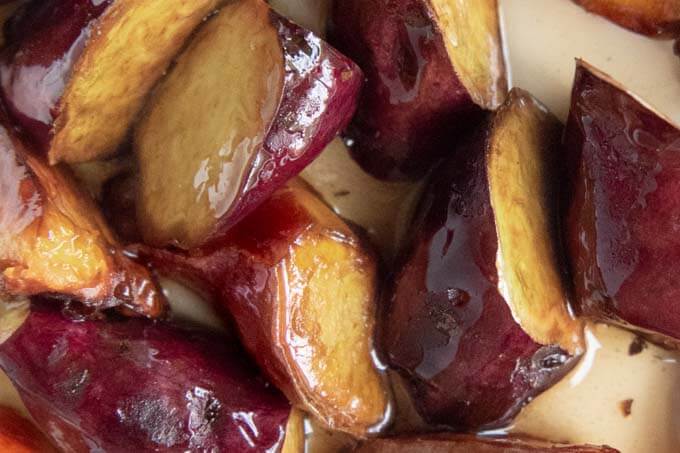 Sweet potato is nutritious and filling. With a thick honey coating, I can imagine how popular it was among young students.

The list of ingredients you need to make Daigaku Imo is very short:

Other than that, you will need oil to deep-fry the sweet potato pieces.

The traditional way of making the sweet syrup uses sugar with mirin and soy sauce, instead of honey. I used honey as I had a jar of honey that I hardly use. In my recipe, I included both methods of making the syrup.

Adding soy sauce to the sugar-based syrup gives a touch of umami, while honey syrup already has a distinct honey flavour. A small amount of salt added to the sweet flavour enhances the sweetness. 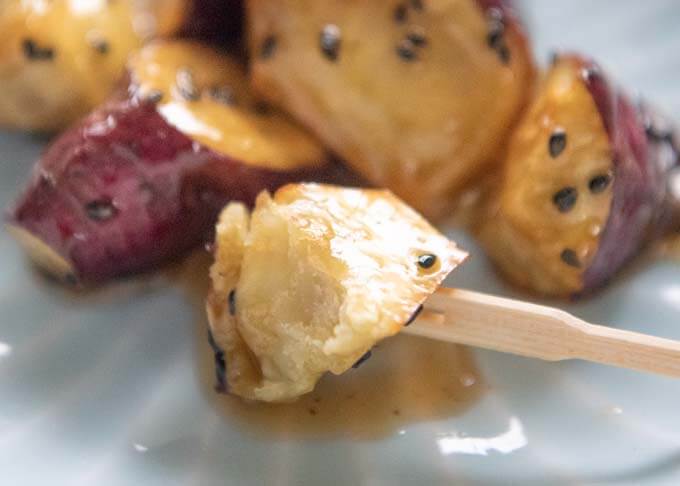 How to make it

I used the rangiri technique (roll-cutting) to cut the potato. Quarter the whole potato lengthwise, then apply the rangiri method to each quartered wedge.

Instead of rangiri, you can simply cut them straight into equal-length sticks. Alternatively, you can halve the sweet potato lengthwise, then cut into thick semi-circular discs.

Deep-frying twice is critical to make crunchy (outside) and fluffy (inside) potatoes. 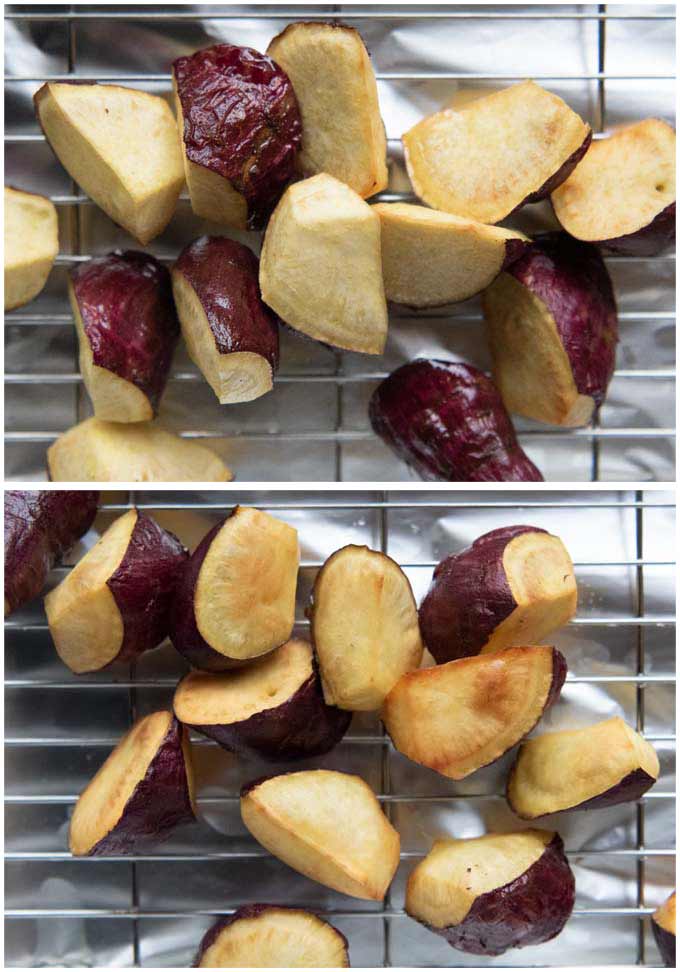 See the difference between the first deep-fry (top photo) and the second deep-fry (bottom photo).

Even if you use sugar instead of honey, the cooking method is the same. You need to stop cooking as soon as small bubbles start coming up and the syrup is thickened, otherwise the syrup becomes too hard when cooled down.

Which Sweet Potatoes to Use

In Sydney, there are 4 different types of sweet potatoes you may find at vegetable shops. 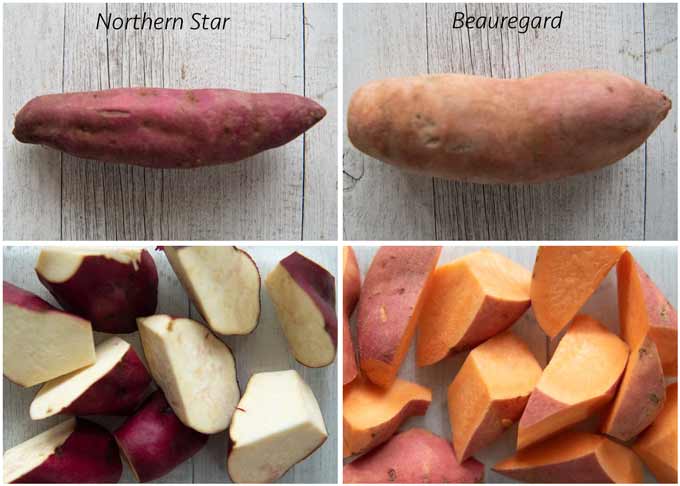 Northern Star is not always available at every vegetable shops and supermarkets but it is the closest to the Japanese sweet potato used for Daigaku Imo. So, I used a Northern Star sweet potato.

The big difference between Northern Star and the Japanese one is the colour of the flesh. I think that the Japanese variety has a slightly yellowish white flesh. And when it is cooked, the flesh becomes deep yellow like cooked chestnuts, which makes a good contrast with the reddish purple skin.

You can see from the photo of my deep-fried Daigaku Imo, the flesh of the fried potato is light yellow instead of deep yellow. But it still looks great with the reddish purple skin.

Because the appearance is the closest to the Daigaku Imo in Japan, I think Northern Star is best suited for Daigaku Imo. I like the colour contrast between the skin and the flesh.

I also made Daigaku Imo with the Beauregard sweet potato. It was equally delicious but the texture of the flesh was a bit moist, rather than fluffy. Although it does not have the colour contrast like Northern Star, I think the bright orange is a beautiful colour for snacks. 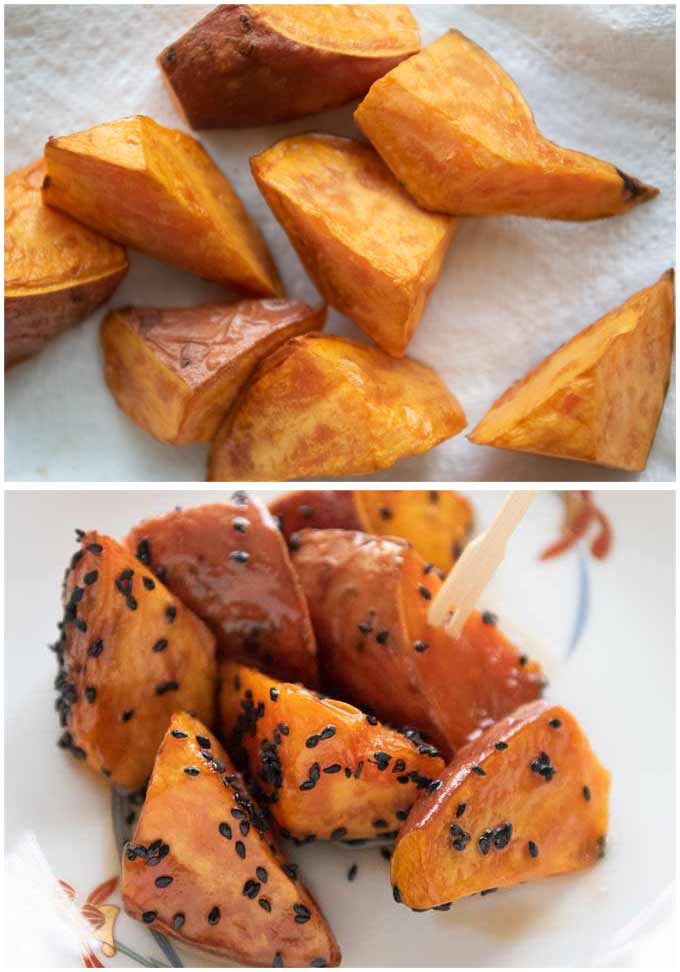 Sweet potatoes are highly nutritious and a great source of fibre, vitamins and minerals. They are also high in antioxidants that protect your body. You need to do deep-frying to make today’s dish but it is worth it.

You can keep Candied Sweet Potatoes for a couple of days in the fridge, or in the freezer for 3 weeks. To defrost, leave them in the fridge to naturally defrost or you can even eat them half-frozen. 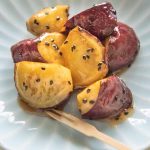 Candied Sweet potatoes is a simple Japanese snack food (some people serve it as a side dish too). Bite-sized sweet potato pieces are deep-fried, then tossed in a sticky syrup. The sweet potatoes are crunchy on the outside and fluffy on the inside. It’s so delicious that you won’t be able to stop eating them.

1. Traditionally, people apply ‘rangiri’ method (roll cutting) to cut the sweet potato into bit size pieces. This is because each piece will have more surfaces which means more syrup will stick to the piece. Since rangiri is suited for thin and long root vegetables, I quartered the sweet potato lengthwise to make long wedges, then applied rangiri.

You don’t need to cut your potato in my way. You can simply cut them straight into equal-length sticks. Alternatively, you can halve the sweet potato lengthwise, then cut into thick semi-circular discs.

2. This is to remove harsh after taste before cooking.

3. Put a thin bamboo skewer or a toothpick through the potato piece. If it gets through easily, the potato is cooked.

4. You can keep Candied Sweet Potatoes for a couple of days in the fridge, or in the freezer for 3 weeks. To defrost, leave them in the fridge to naturally defrost or you can even eat them half-frozen.

5. Nutrition per serving (3 servings). It is assumed that the oil absorption rate of sweet potato is 3% and ¾ of the honey syrup is consumed.

Most people think of Daigaku Imo as a snack. So, instead of composing a meal set today, I listed desserts that I have shared so far.

I don’t have many dessert recipes. In fact, there are only 5 including today’s dish (shame on me!). Here they are! 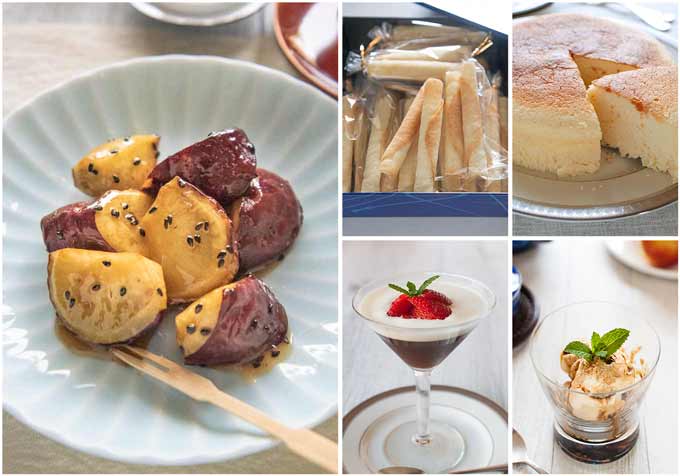 Oops! I forgot about Japanese Strawberry Sponge Cake (Strawberry Shortcake) to include! 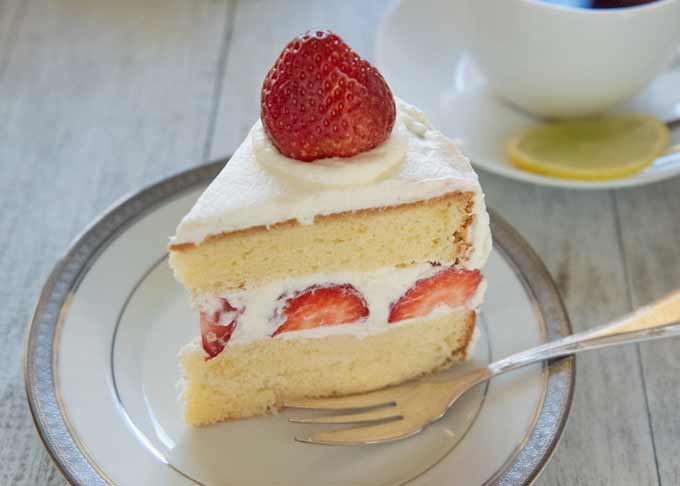