Yakibuta (Braised Pork – Japanese Char Siu) is a large piece of pork cooked in soy flavoured sauce over a couple of hours. This is the pork for ramen! It takes time to cook but it is quite simple to make. The flavour penetrates into the meat and the meat is so tender and flavoursome. Slice thinly to serve as a main dish, appetiser or a topping for ramen. 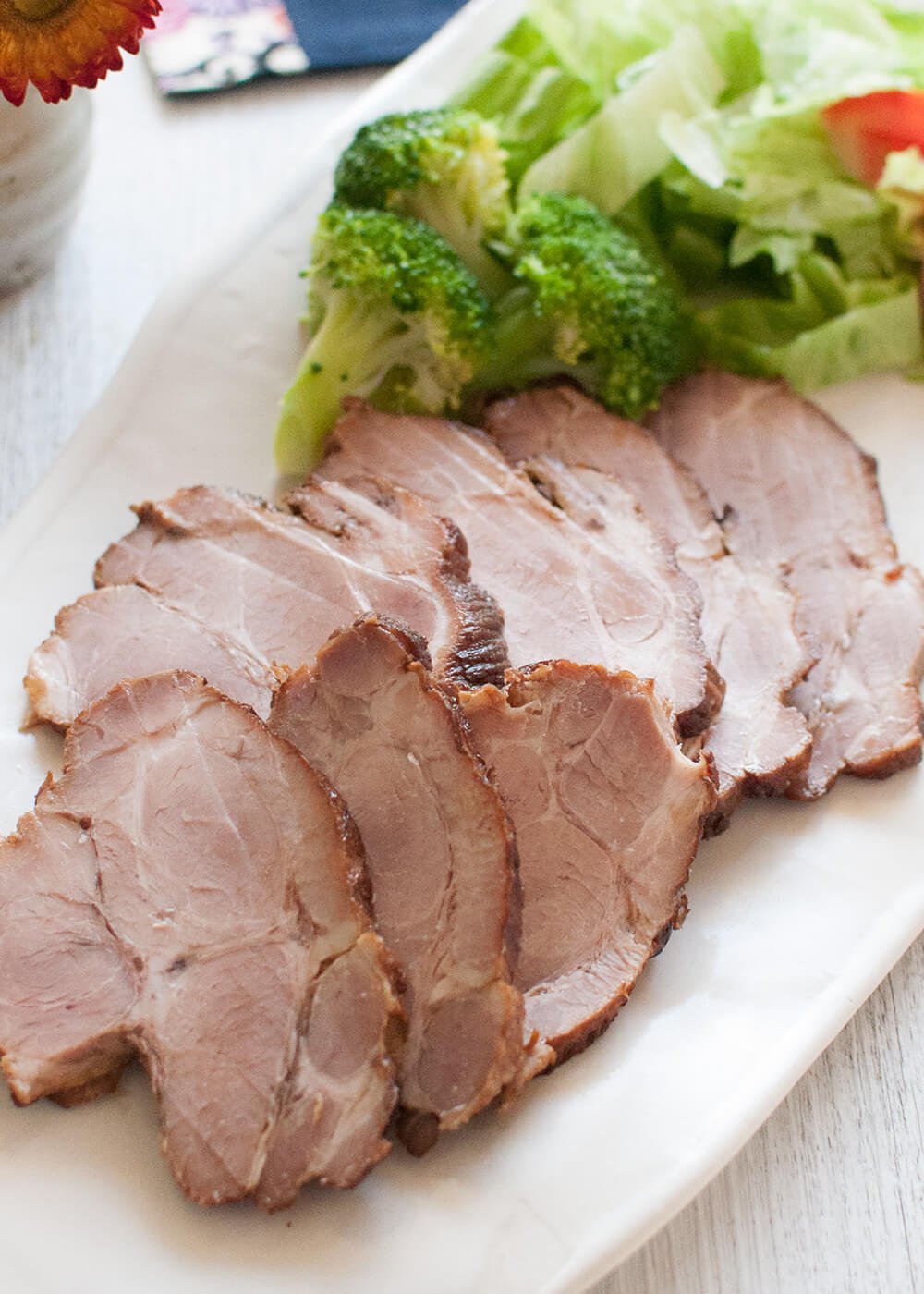 When you order a bowl of plain ramen at a Japanese noodle shop, it usually comes with a couple of slices of pork along with a few other toppings. This pork is yakibuta (braised pork).

Some people call today’s dish char siu (叉燒) but that is not quite accurate. Char siu is a Chinese barbequed pork and, as the name suggests, it is grilled after seasoning strips of pork. On the other hand, yakibuta (焼き豚) is made by searing a block of meat first, then cooking in soy-based sauce until tender. So I call it Japanese Char Siu.

It is understandable that people get confused about the name because the word “yaki” (焼き) means grill. So strictly speaking, this dish should actually be called nibuta (煮豚) meaning simmered pork, instead of yakibuta. But the word ‘yaki’ might have come from the fact that the pork is seared at the beginning. 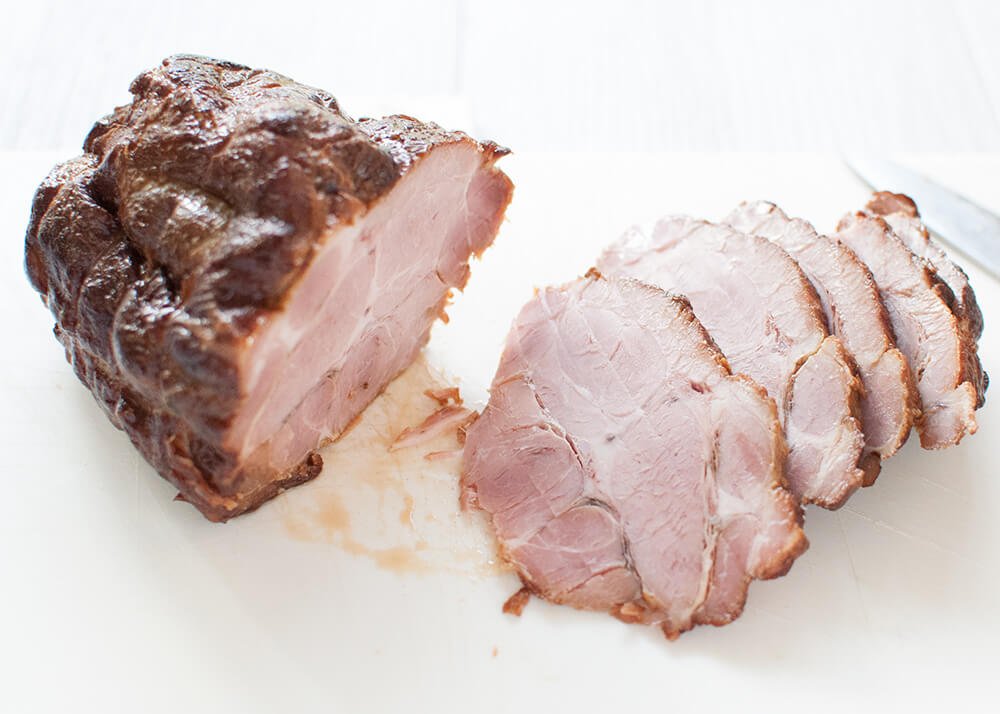 At ramen specialty shops, they often call yakibuta “char siu” even if it is the Japanese braised pork like the one in this recipe. Some people call even nibuta “char siu”. How confusing! So, when you hear the word “char siu” in Japan, you have to double check which one of the pork dishes it is – Chinese char siu, yakibuta or nibuta. all of them are tasty, though.

Unlike Chinese char siu, the block of pork used to make yakibuta is rather large, about 8 – 10cm (3½ – 4”) in diameter. But it becomes slightly thinner because the meat needs to be tied with string to tighten the flesh and help it stay in a round shape.

I used a block of pork scotch fillet (pork neck or pork collar) but you could use pork loin or pork belly. In the case of pork belly, you would need to roll it to make it into a log shape, then tie with strings. Here are the photos of yakibuta made with pork belly. 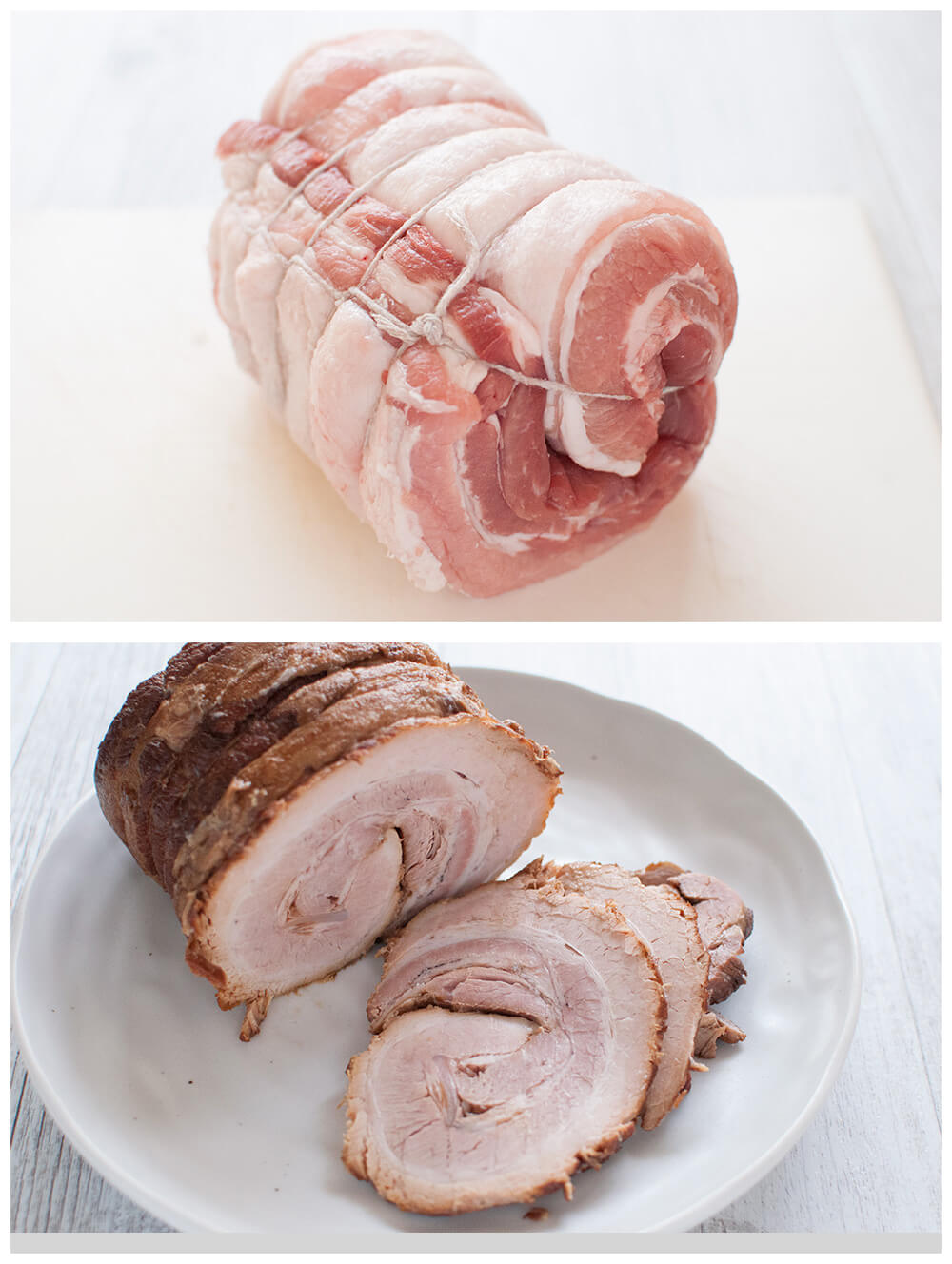 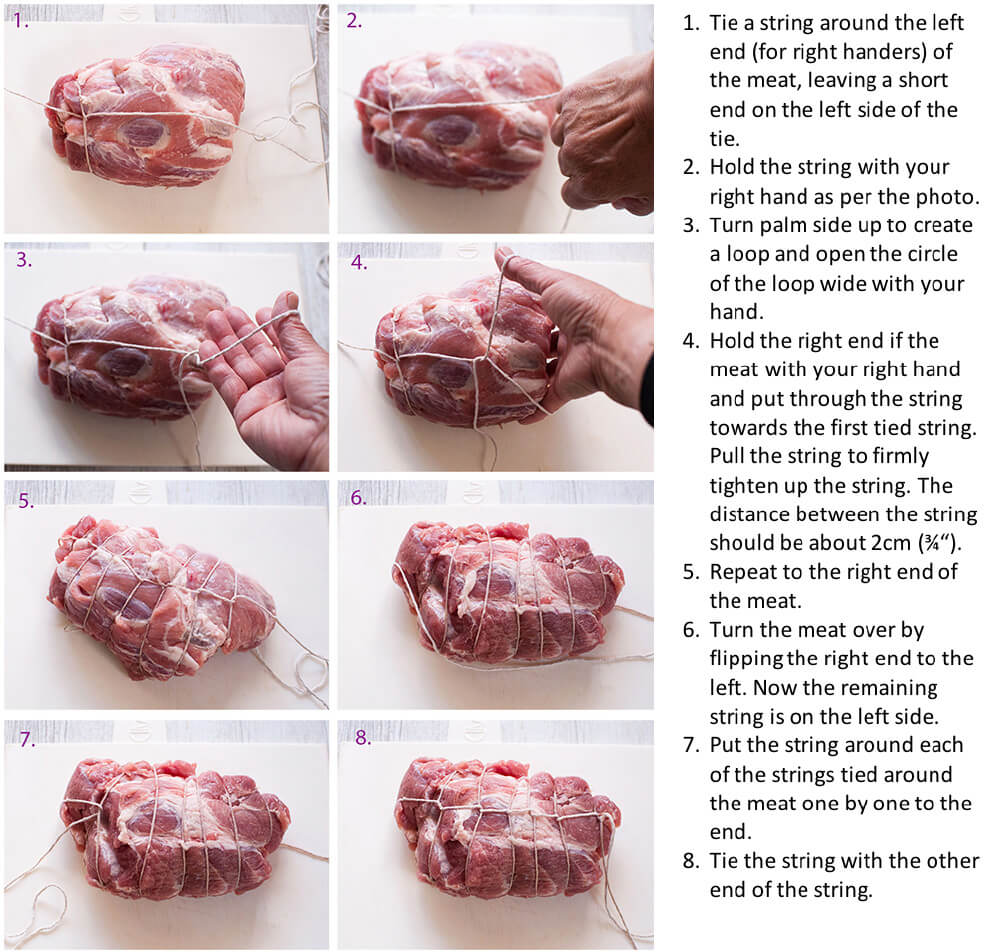 Before cooking the meat in the flavoured sauce, the meat needs to be charred to seal it. Use a non-stick frypan to cook all around the meat including the sides, until the meat becomes a burnt brown colour (see the top photo below).

Then cook the meat in a pot with water, soy sauce, sake, sugar, crushed ginger and shallots (scallions) for a couple of hours. To let the flavour of the sauce penetrate into the meat further, I leave the meat in the sauce for few hours to overnight in the fridge after cooking.

I remove the string after chilling in the fridge (see the bottom photo below). The meat is quite tender and could break if you try to remove the string while still hot or even warm. Then slice the meat as you wish. Yum! 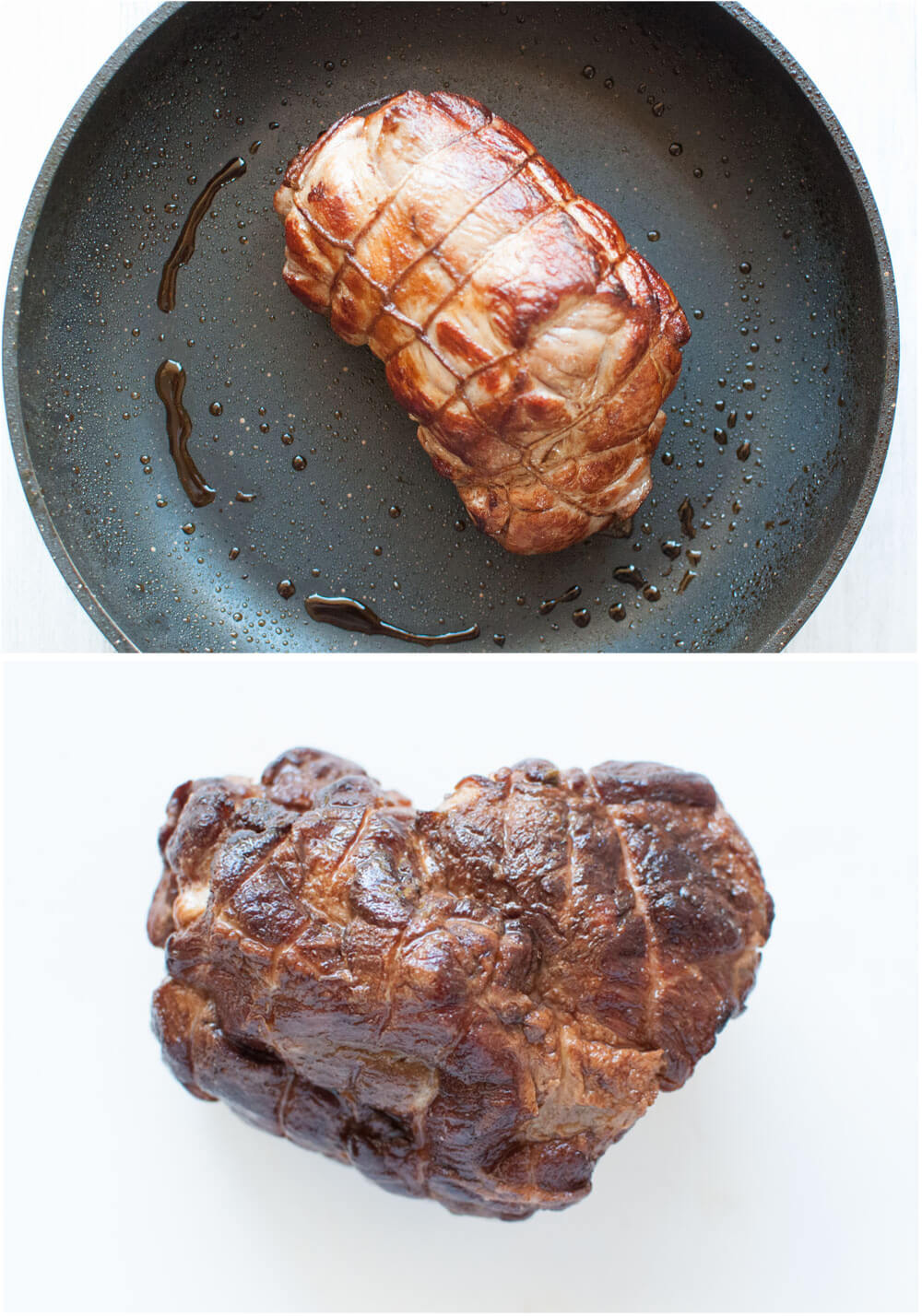 In my household, yakibuta is not served hot. It is served either at room temperature or even cold straight from the fridge. You can either leave the meat on the kitchen bench for a while or microwave slightly if in a hurry to bring it to room temperature.

You will have quite a lot of sauce left over from yakibuta. The meat should have sufficient flavour in itself but if you wish, you could pour a small amount of the sauce over it.

I once condensed the sauce to 250-300ml (8.5-10oz) and kept it for later use such as soy base for ramen soup, substitute to teriyaki sauce.

Another way of making use of the leftover sauce is to make soy sauce marinated boiled egg. It is called “yudetamago no shouyu-zuke ” (ゆで卵の醤油漬け). Yudetamago (ゆで卵) means boiled egg and shouyu-zuke (醤油漬け) is marinated in soy sauce. It is best to make the boiled egg with a slightly runny egg yolk in my view but it is up to you. Simply place the peeled boiled egg in the sauce from the yakibuta (before condensed) and leave it for few hours up to overnight. 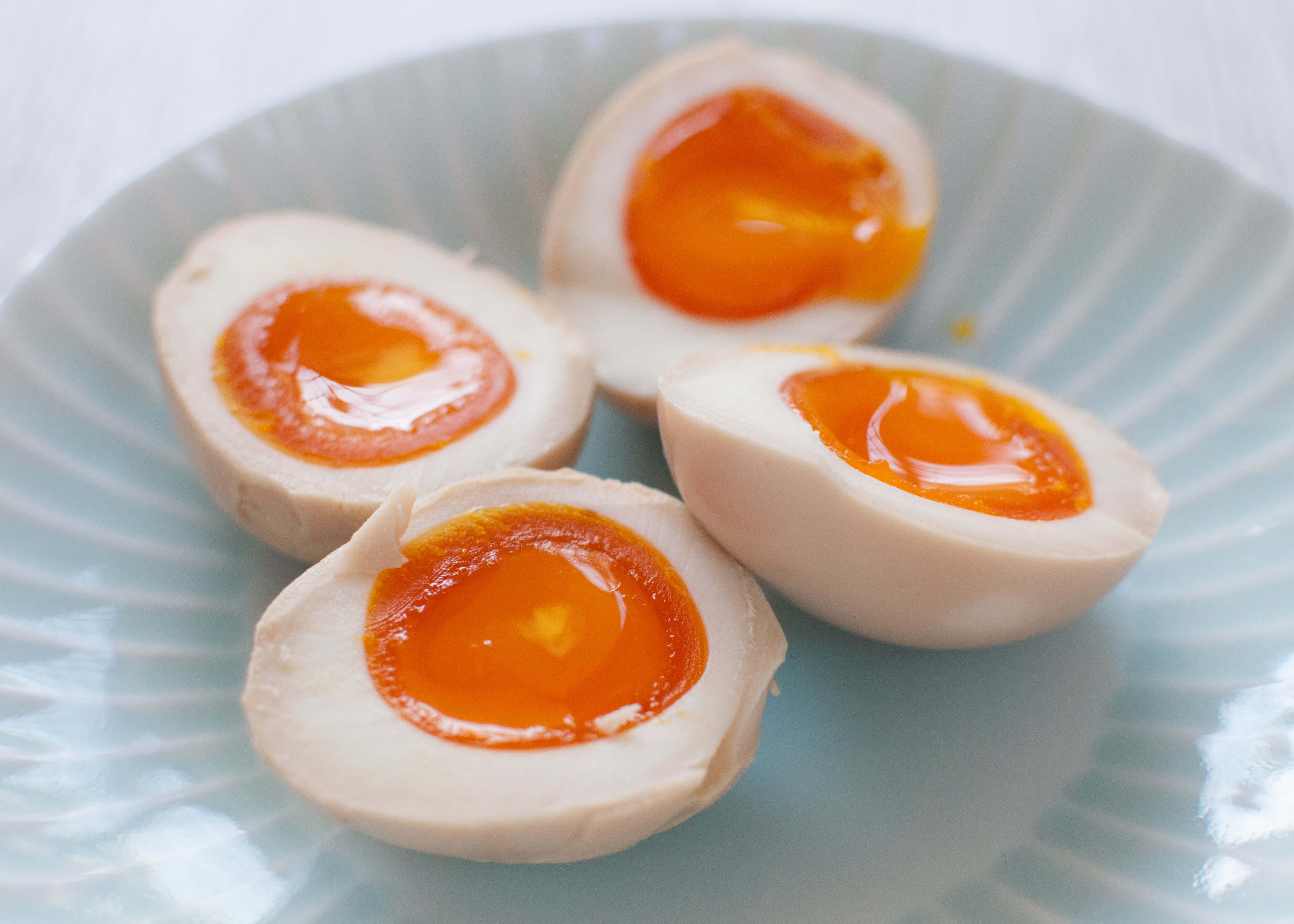 Thinly sliced yakibuta is great for ramen topping. Standard ramen always comes with a couple of slices of yakibuta. I make ramen often for my breakfast or lunch. Yes, I eat ramen for breakfast and all my kids shake their heads with disbelief (meaning “how come such an old woman can eat ramen in the morning?”).

I am planning to post a quick ramen recipe using this yakibuta in a month or two when summer in northern hemisphere is over.

You can also place sliced yakibuta on hot rice and make yakibuta-don (焼き豚丼).  The photo below is the example of yakibuta-don which my son made. When I cooked yakibuta with pork belly, I gave most of them to my son who lives close to me. With just few slices of yakibuta, you can make such a good looking rice dish. Pour some yakibuta sauce over the rice before placing toppings. 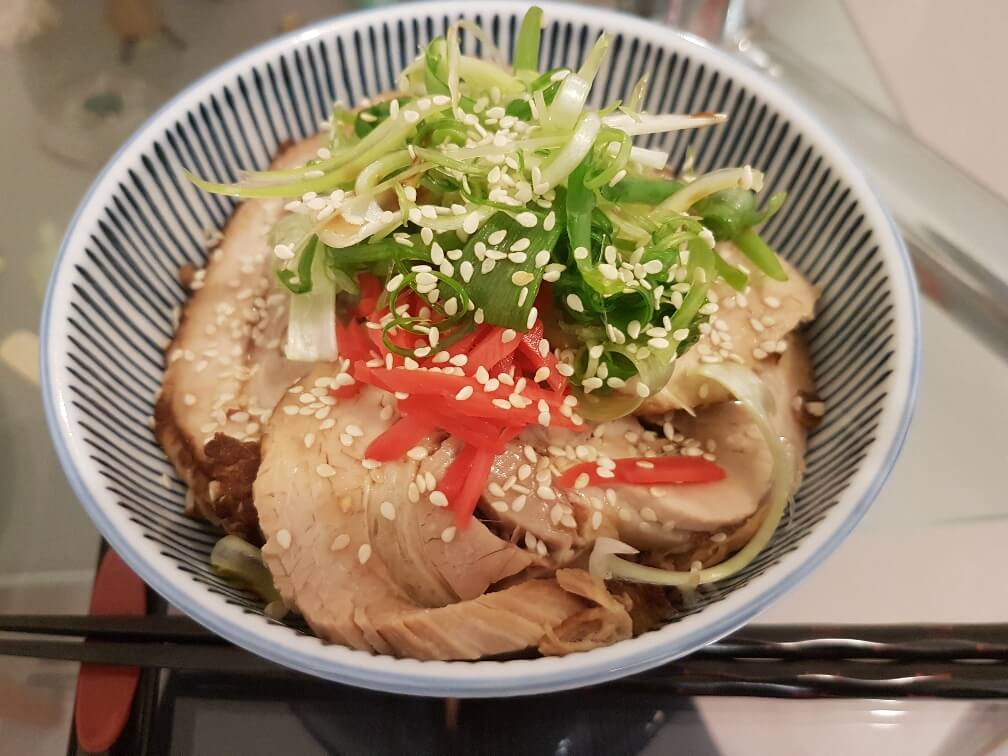 If you can’t consume yakibuta at once, you can freeze it after slicing. If you are likely to use frozen sliced yakibuta in small amount, I’d suggest that you place baking paper between the slices so that you can remove each slice easily. 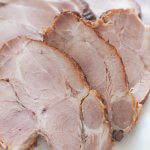 Yakibuta (Braised pork) is a chunk of pork cooked in soy flavoured sauce over a couple of hours. It takes time to cook but it is quite simple to make. The flavour penetrates into the meat and the meat is so tender and flavoursome. Slice thinly to serve as a main dish, appetiser at room temperature or cold. It is a popular topping for ramen.

Total time does not include time to marinate the meat after cooking.

1. You can use a pork loin block or a sheet of pork belly. If using pork belly, roll the sheet to make a log, then tie it. To tie the meat, please see the photo steps at the end of the notes.

2. To bruise the shallots, press the white part of the stem with the side of the knife and crush.

3. I cooked 2 hours for about 1kg (2.2lb) meat. The thickness of the meat was about 10cm (4") in the middle before tied. If your meat is thinner or smaller, it will require slightly less time to get the meat tender. If the meat is larger/thicker, it will take longer. Check if a bamboo skewer can get through it easily.

4. It is important to cover the meat with the sauce completely otherwise the part of the meat that did not get marinated will have less flavour.

If using a zip lock bag, try to remove the air in the bag as much as possible. To do this, fill the sink with water as deep as possible, seal the zip leaving 1cm unzipped, then place the bag in the sink. Due to the pressure under the water, the air inside the bag gets pushed to the top. Let go of the air as much as you can and seal the small opening of the zip.

If using a container, try to use a container which just fits in the meat but sufficient height to cover the height of the meat. With my meat, I could have used a large pickle bottle.

If you cannot cover completely, then I would recommend that you turn the meat over occasionally.

5. If I am using the yakibuta as ramen topping, I will slice it thinner.

6. If you can't consume yakibuta at once, you can freeze it after slicing. If you are likely to use frozen sliced yakibuta in small amount, I'd suggest that you place baking paper between the slices so that you can remove each slice easily.

How to Tie Meat 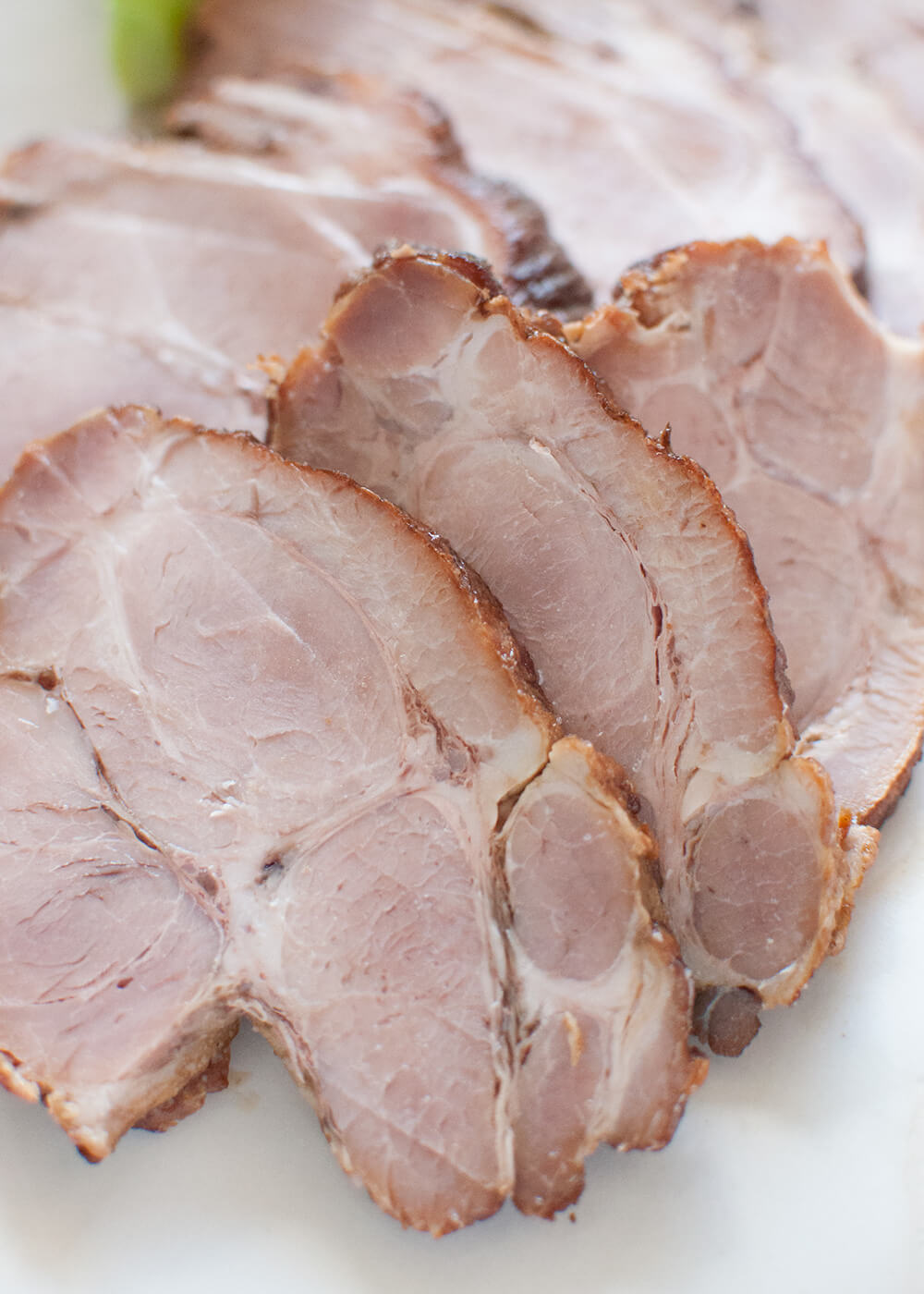