As the name suggests, White Stew is a white coloured stew made from béchamel sauce. It’s so colourful with the chicken, carrots, potatoes, onions and green peas in it. This stew is also called ‘Cream Stew’ although no cream is added to the sauce. 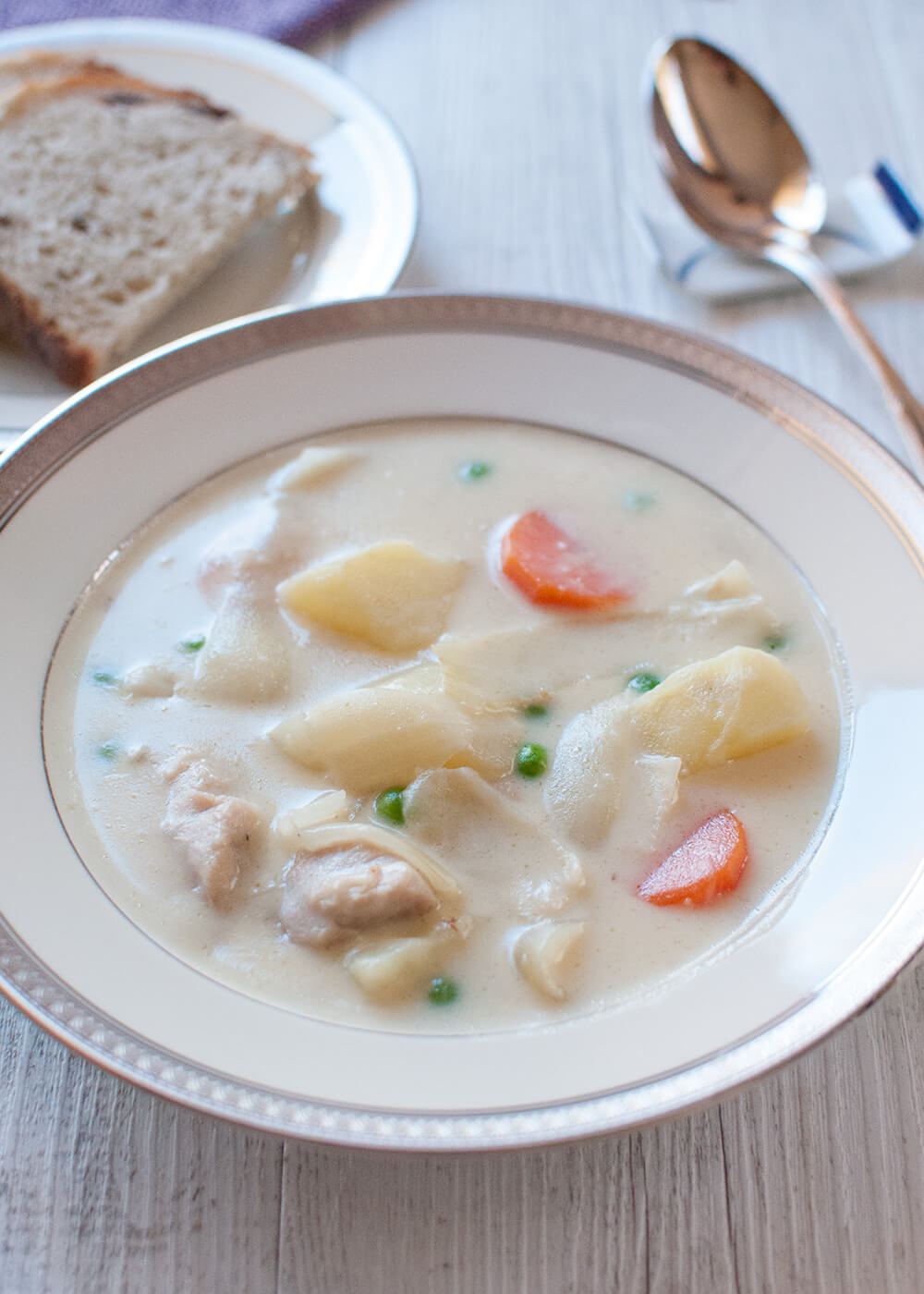 White stew (also called cream stew) is one of the Western-influenced dishes of Japan. It is a very popular home cooking dish, particularly among families with young children. I remember cooking white stew regularly when my kids were school-aged.

In Japanese, white stew is pronounced as ‘howaito shichū’ (ホワイトシチュー), and cream stew is ‘kur ī mu shichū’ (クリームシチュー). You see, the Japanese language does not have an equivalent sound to ‘t’ or ‘s’. So, ‘t’ often becomes ‘to’, e.g. the word ‘train’ will be pronounced as ‘torein’, and ‘s’ becomes ‘shi’ or ‘su’. Actually, instead of saying ‘shichū’, some Japanese people say ‘suchū’, which is closer to the English sound. 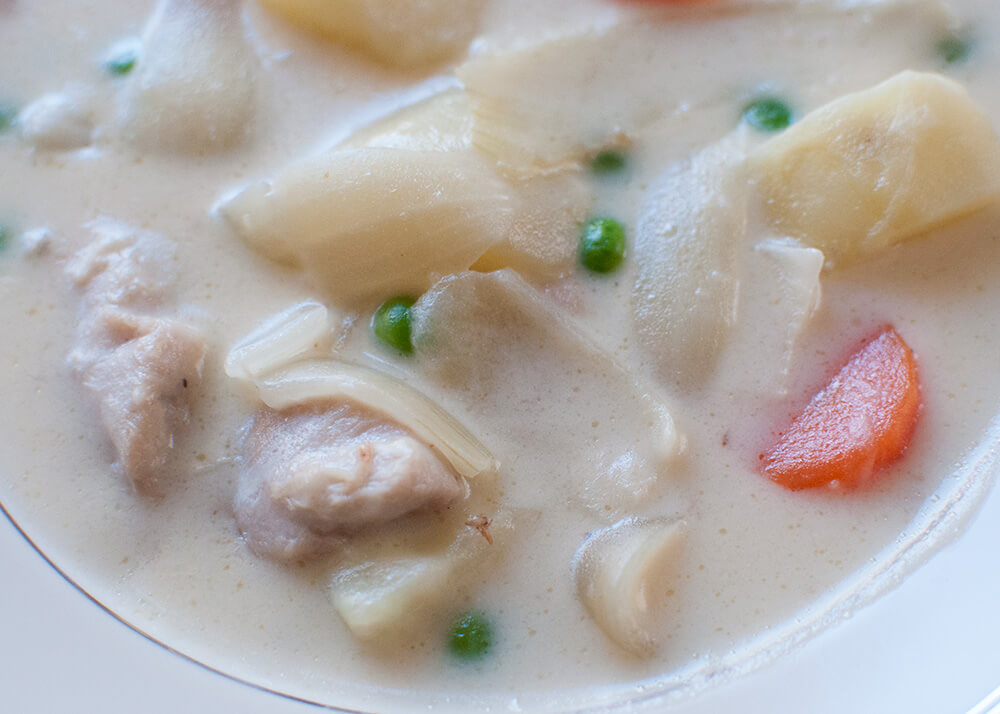 The name ‘white stew’ appeared in 1947 when Japanese schools served the stew with skim milk added to it. To recover from lack of nutrition during the war, the government encouraged schools to use skim milk in the school lunches (Japanese public schools provide lunches!) to supplement calcium for children. As the colour of the stew was white, it was called white stew or cream stew (probably because it was thick and creamy).

About 20 years later when the famous food brand House Foods Corporation introduced cream stew roux in granular form in a pack, white stew became the popular winter dish in Japan. This was also the time when the name ‘cream stew’ became more dominant than ‘white stew’.

The way to use the roux is very similar to the curry roux that I talked about in my post, Katsu Curry (Japanese Curry with Chicken Cutlet). Sauté meat and vegetables, add water and cook, then mix in the roux. 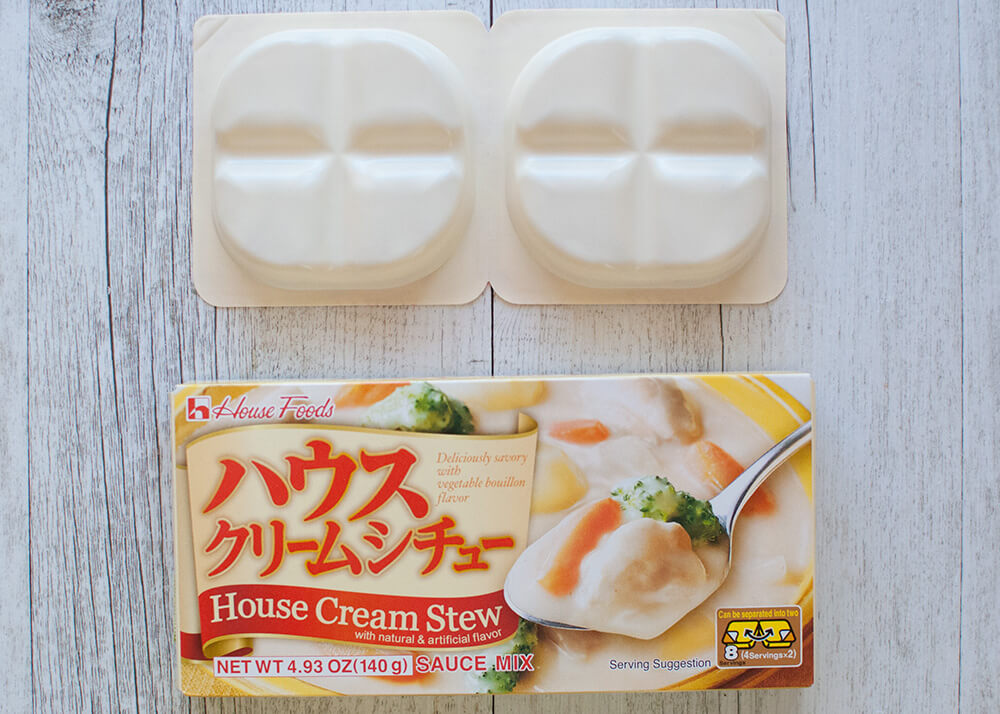 The entire pack serves 8 but the block of roux is wrapped into two separate pieces and partitioned into 4 within each wrap. So it is easy to make stew for a smaller number of people.

When I was working and my children were still little, I sometimes bought a pack of cream stew roux from the Japanese grocery stores and made white stew (I mean cream stew) for dinner. But sometimes I made white stew from scratch using today’s recipe. It takes a little more effort to cook as you need to make béchamel sauce, but I find that the flavour is much nicer than the instant roux.

Although it is also called ‘Cream Stew’, this White Stew does not use cream at all. No cheese, either. The thick white sauce is made from béchamel and milk. Come to think of it, I cannot think of any stews other than this Japanese White Stew whose sauce is made of thickened milk.

Since I use less butter, the flour and butter mixture is quite dry. But when the flour is cooked for 7-8 minutes at low temperature, it changes the chemical composition and becomes wet (see the bottom photo below). You will also notice nutty fragrances coming out. At this point, the consistency becomes similar to Nagi’s method of mixing more butter to flour, and you are ready to add milk. 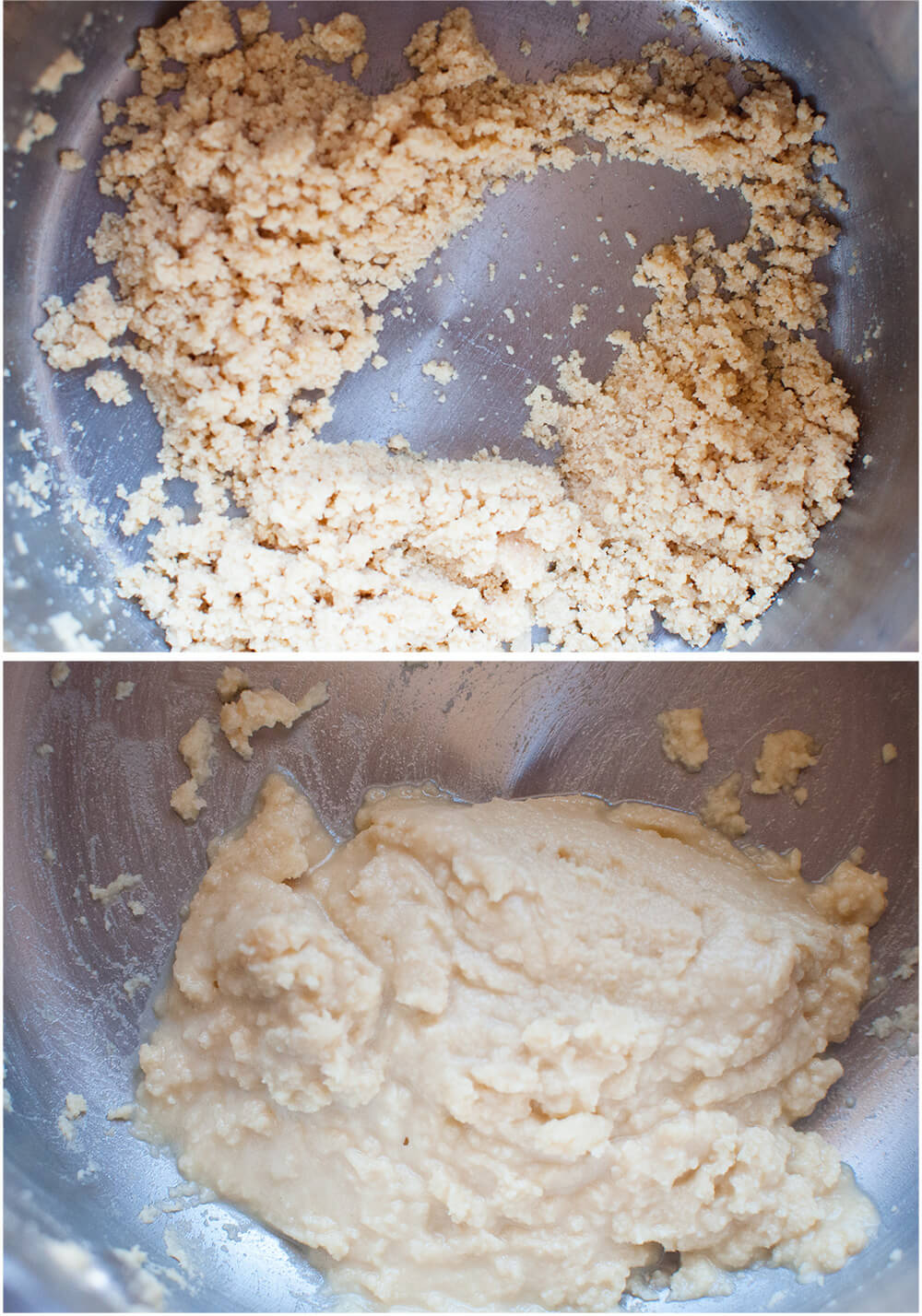 Flour and butter mixture is rather dry at the beginning (top) but after 7-8 minutes of heating, it will become wet (bottom).

Before adding milk, I place the saucepan on a wet towel to reduce the temperature of the pan. This will prevent the milk from bubbling when added to the saucepan.

Instead of adding milk all at once, add milk in batches. Ensure in each batch the béchamel mixture is lump free by mixing well over low heat. Using this method, it is quite possible to make smooth béchamel sauce without using an egg beater to remove lumps. But if lumps are there, feel free to use an egg beater.

Ingredients to go into the stew can vary but potatoes, carrots and onions are the most common vegetables. Popular meat used in white stew is chicken but I sometimes use pork. It is rare to use beef in this recipe, probably because the colour of the meat is too dark for the white roux. Besides, beef stew is also popular among Japanese people so beef has its own place. 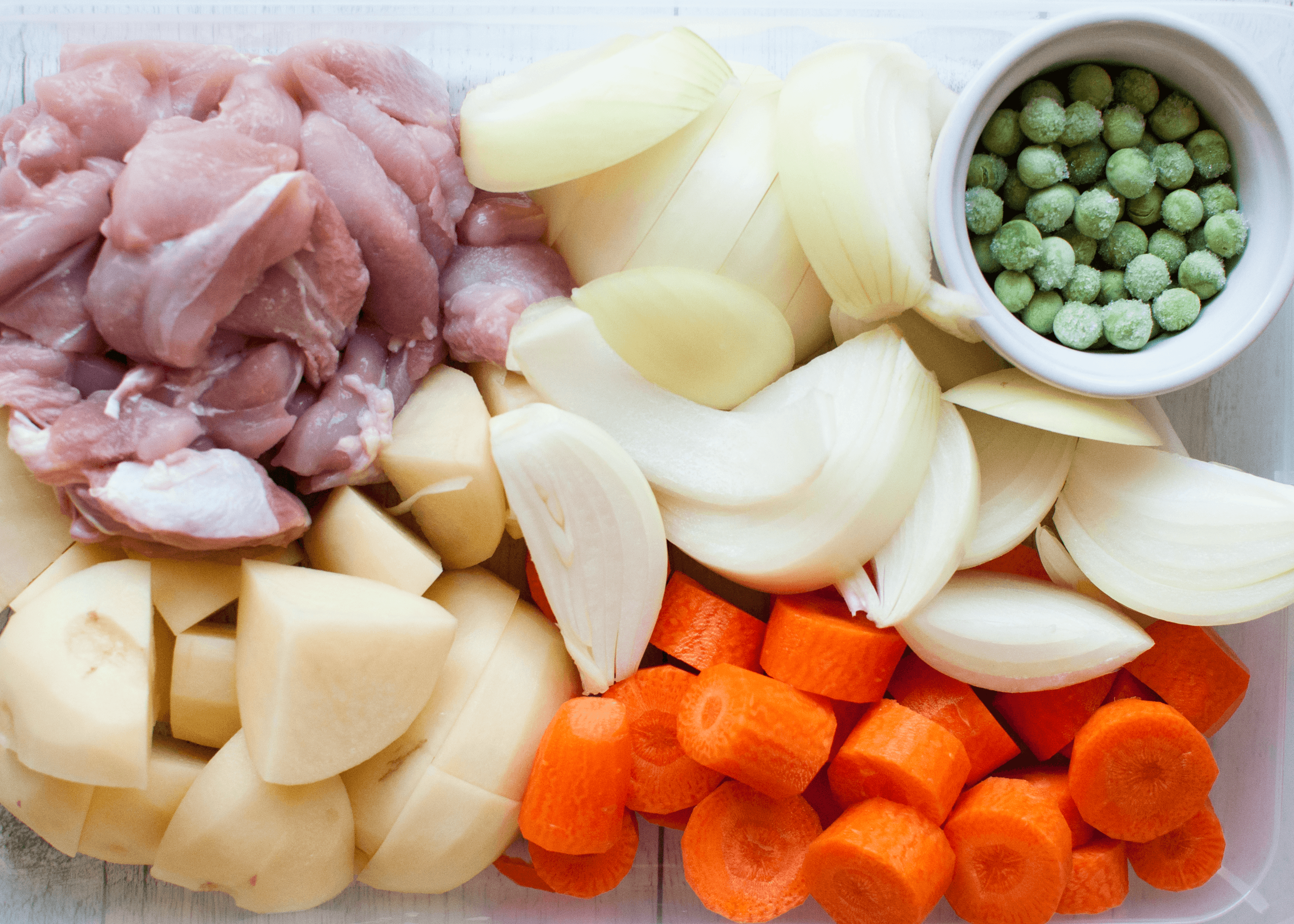 It is also common to add button mushrooms, which makes the stew more of a Western style dish. I once added shimeji mushrooms instead of button mushrooms and they were great too. I don’t think I would use shiitake mushrooms for this. I think shimeji would be the best for this stew if you were to use Japanese mushrooms.

White stew has developed over time in Japan to suit to people’s palette, which is more Westernised these days. House Foods introduced Hokkaido Cream Stew, which contains corn and cheese. It would be much richer than the original cream stew. They called it ‘Hokkaido’ because Hokkaido (northern island) is famous for its production of corns and cheeses.

White Stew is a hearty winter dish. It is not heavy with cream and cheese but it is light and tasty. The weather in Australia is getting warmer day by day but the temperature is still ok to have stew for dinner, I think. Northern hemisphere countries are heading towards winter and today’s recipe would be perfect on a cold night. 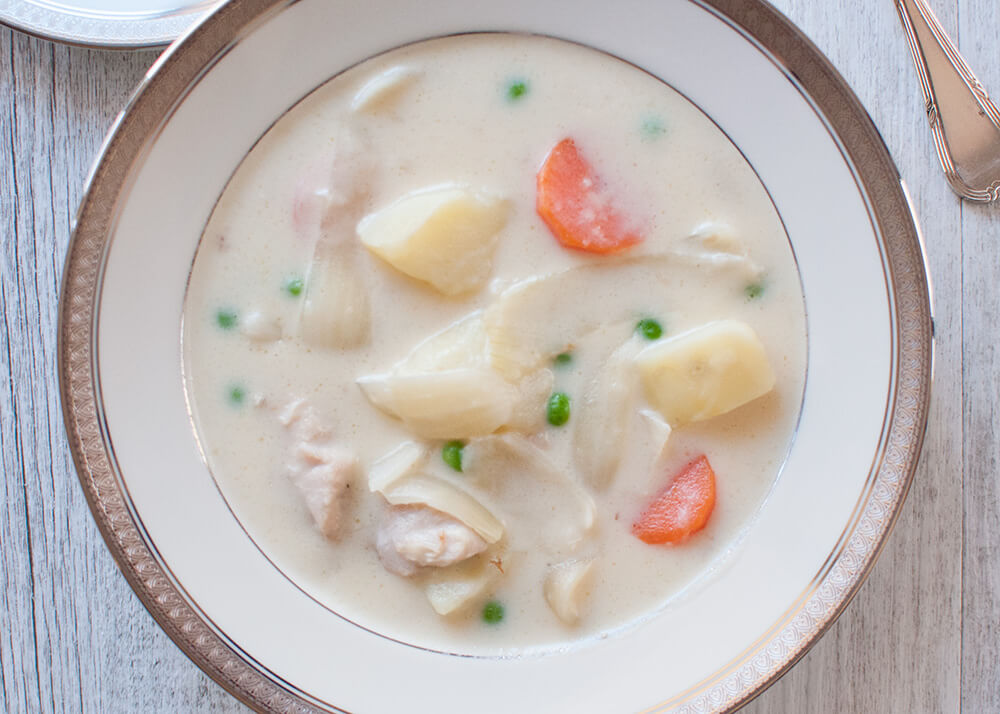 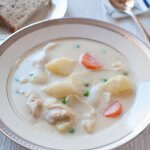 This is a white coloured stew made from béchamel sauce. It’s so colourful with the chicken, carrots, potatoes, onions and green peas in it. This stew is also called ‘Cream Stew’ although no cream is added to the sauce and it is not as heavy as it might look.

1. My carrot was not very thick so I cut it into discs. If your carrot is fat, cut it in half or quarter vertically, then chop.

2. My potatoes were medium size potatoes. I cut them into quarters lengthways, then cut each quarter into three perpendicular to the first cut. This made 12 large bite size pieces from each potato.

Alternatively, you can use broccoli florets or chopped green beans. They should also be pre-cooked.

4. Time taken to cook varies depending on the size of the vegetables.