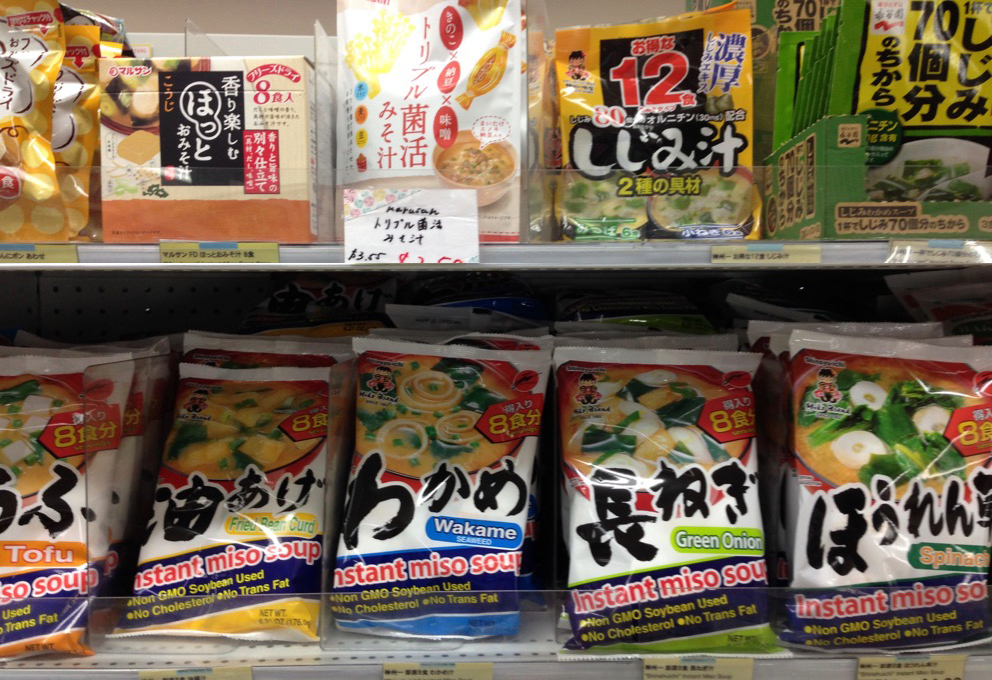 Instant miso soup packets sold at the Japanese grocery store. There were many more!

I posted Miso Soup Basics which you can find under the menu “Pantry Essentials”. In the post, I introduced two kinds of miso soups which are made from scratch starting with making dashi stock.

I often make miso soup from scratch like that, especially when I have a large number of people to feed or I would like to spend time making a special miso soup. However, when I need it just for myself, or me and only a couple of my children, I often use instant miso soup.

Instant miso soup comes in one or two small sachet/packet per serving. You simply empty the contents into a soup bowl, add some boiling water as per the directions on the packet, and mix. That’s it. I find that it is very convenient to stock instant miso soups in your pantry, in case you run out of time or you simply can’t be bothered to make it from scratch. 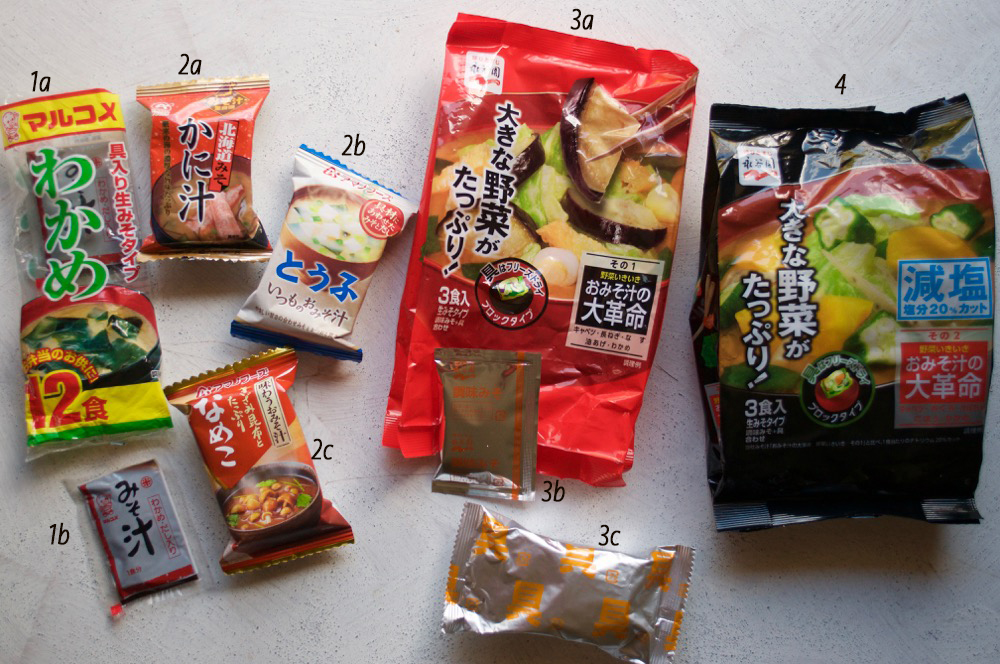 Item 1 is the cheapest and the flavour is not as good as the other three in my view. Freeze-dried miso soup by Amano Foods is the most expensive, but I think the other two by Nagatanien (3 and 4) are as good.

Inside the Instant Miso Soup Sachet

The photo below shows what it looks like before you add boiling water to the bowl. From top right, clockwise: 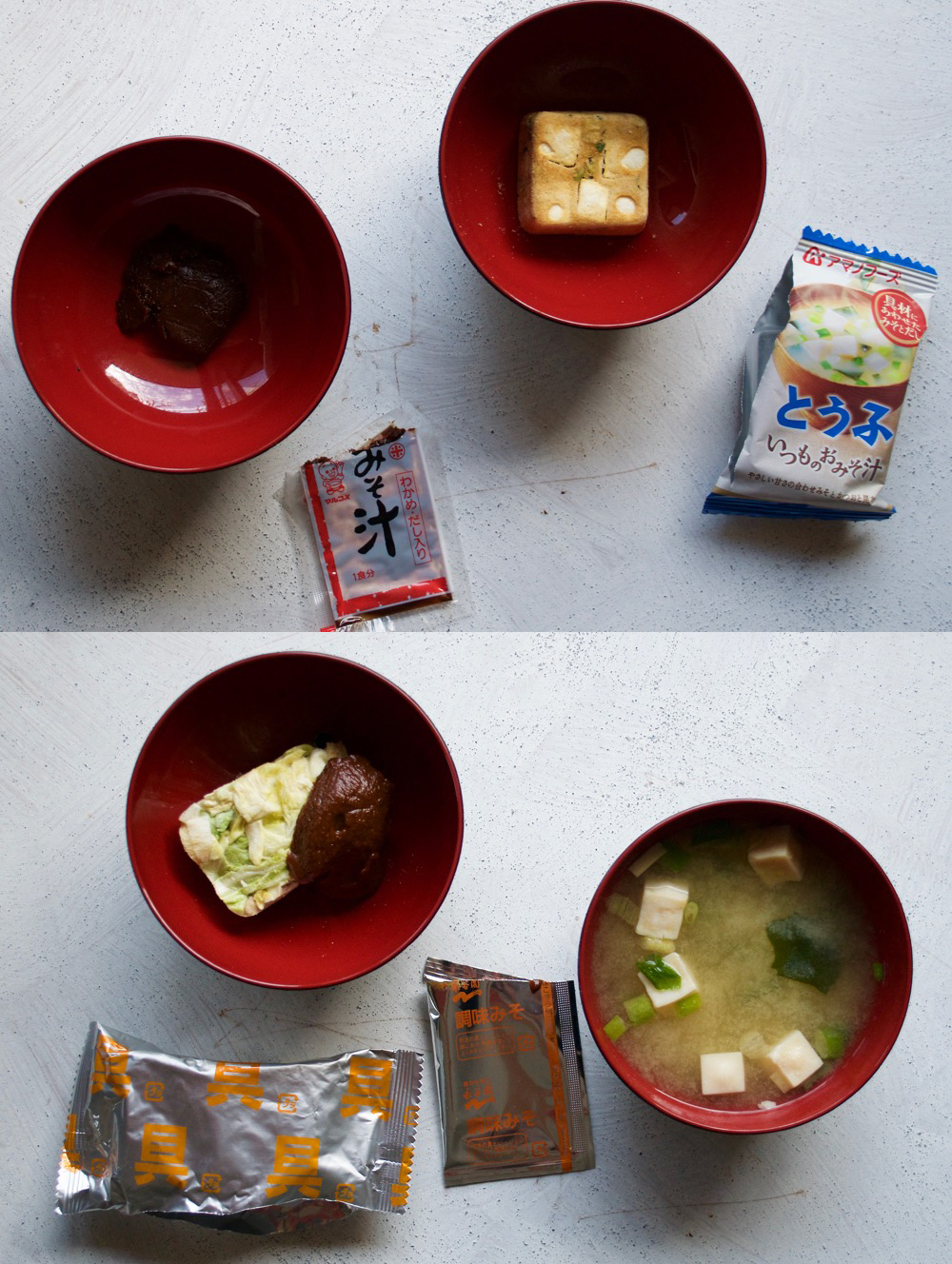 I must say though, handling only a dried cube like the one from Amano Foods is much easier than opening a sachet of miso paste and getting it out. It might just be me but I always get some miso paste stuck on my fingers when handling it. I just lick it off to clean my finger but it is kind of a nuisance.

Those freeze-dried vegetables are amazing. In the case of Amano Foods, even the soup itself is freeze-dried and comes with a mixture of miso and the vegetables as a cube. The quality of vegetables after they are rehydrated is unbelievably close to vegetables cooked from scratch.

How to Prepare Instant Miso Soup

As mentioned before, all you need to do is empty a sachet of miso paste and/or a freeze-dried cube into a soup bowl or a mug, then add about 160-180ml (5.4-6.1 oz) of boiling water to it. Mix well. In the case of the miso paste type, the miso paste tends to stay at the bottom of the bowl so make sure that you mix well before eating. In the case of freeze-dried vegetables, it will only take about 15 seconds for the vegetables to rehydrate. By the time you mix the soup, it will be ready to eat!

If you feel guilty about just adding hot water to serve miso soup, you can add more ingredients to it so that you feel like you made it. Here are some suggestions to make the instant miso soup more original.