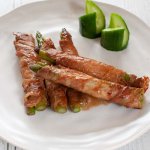 Asparagus Rolls with Pork is a very quick and simple dish, perfect as a starter as well as a side. Teriyaki sauce makes it a Japanese-style asparagus roll.

1. My asparagus was very thin (about 1cm/⅜" in diameter) so I used two sticks to make a roll. If your asparagus is thick, use one stick per roll.

2. My bunch of asparagus had 9 spears, hence I made 9 rolls. Adjust the number of slices required based on number of spears you use.
9 slices of pork loin weighed 125g/4.4oz and the amount of sauce is just right for the amount of pork.

You can buy frozen thinly sliced pork at HApanese/Asian grocery stores. They might be sold as shabu-shabu pork.

3. How to make opposing cut cucumber (違い切り, chigai-giri).
You can make this using a Japanese cucumber or Lebanese cucumber, which are about 2.5cm/1" in diameter.