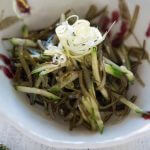 Konbu Seaweed and Cucumber Salad is a great way of eating a good amount of konbu, which is known for providing plenty of health benefits. It is a very refreshing salad with a hint of ginger flavour. The total calorie of this salad is very low – less than 100 calories per serving!

To make it a vegetarian dish, use shiro dashi that is made of twice as much konbu and omit bonito flakes.

Total Time includes the time to soak the konbu in water for 3 hours.

Don't forget to see the section 'MEAL IDEAS' below the recipe card! It gives you a list of dishes that I have already posted and this recipe so you can make up a complete meal. I hope it is of help to you.

1. Do not use many small pieces of konbu to make up for the amount required. If possible, use one large piece with the full width of the konbu, or 2-3 pieces at most. Otherwise the length of the strands of the konbu may become too short.

Whenever I make dashi stock with konbu and bonito flakes, I freeze the used konbu. When enough amount of konbu pieces are accumulated, I use them to make a salad like today’s dish.

2. I slice the cucumber diagonally into 3mm thick, then pile up few slices and cut them lengthwise to make matchsticks. This method of cutting the cucumbers results in all the matchsticks with green ends and they looks nicer in the salad.

I used cucumber pieces to go with shredded konbu but you don't have to have cucumbers or you can replace them with other vegetables strips such as carrot or bean sprouts.

3. The reamining liquid is actually a konbu dashi that you can use for other dishes. You can keep konbu dashi for 3 days in the fridge.

Although it will lose a bit of flavour, you can freeze konbu dashi for 2-3 weeks. Divide the broth into smaller portions and freeze them. Thaw naturally in the fridge before using.

4. I find that the konbu julienned crosswise are softer than those julienned lengthwise. It must be due to the way kelp is structured.

5. Shredded Konbu Salad can keep for a couple of days in the fridge