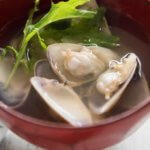 1. I used pipis as shown in the post because they are always available in Sydney.

Clams are often sold as 'no sand' at fish shops. But if you are still concerned, leave the shells in 3-4% salt water for 1 hour. The water level is just below the surface of the clams so that they can breathe.

If you can, put the clams in a sieve, a strainer or a rack, then place it in a bowl or a tray of salt water so that the shells will not suck in the dropped sand again.

If your clams appear to have a lot of sand, you need to leave the clams in the salty water for ½ day.

2. Other than mizuna, commonly used green garnishes are mitsuba (Japanese parsley), spinach or Asian greens. Do not use green leaves with strong flavour, e.g. shallots/scallions.

3. If you have time, leave the konbu in the 500ml / 1.1pt water 30 minutes before cooking so that more flavours from the konbu will be extracted.

4. If the shell is not opening, discard as it was probably dead before cooking and you wouldn't know how long it had been dead for.