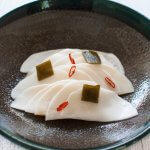 Pickled Turnip (Senmai-zuke) is a Kyoto specialty food. Thinly sliced turnip is marinated in sweet vinegar with konbu and chilli. Crunchy turnip with sweet and sour flavour - it's great with rice and goes well with drinks as nibbles. The traditional senmai-zuke uses turnip like my recipe but you can make it with daikon (white radish) too - see the notes.

Total time does not include time to marinate. You will need minimum 2 days to make it.

1. I used 3 turnips that weighed slightly more than 500g. Slice horizontally to make round slices if you have a mandolin with similar thickness.

If you don’t have a mandolin, it would be a challenge to make round thin slices. So, I would suggest that you cut a turnip vertically in half, place the half turnip on a cutting board cut side down, then slice thinly to make semi-circle slices.

You can also substitute turnip with daikon (white radish) but see note 4 for variations to the steps.

2. The majority of konbu comes from Hokkaido and the packet indicates where within Hokkaido it came from. If you have a choice, use konbu from Rishiri (利尻) or Rausu (羅臼) because they contain more umami than other konbu. It is still tasty even if you use other types of konbu, though.

You can cut konbu in any ways. I sometimes cut it into strings, instead of squares.

3. I used a 16cm round plastic container, but you can use a square or oblong shape container with a similar surface area at the bottom.

If you don’t have a similar size container, you can use a slightly larger or smaller container. The difference is how many layers of turnip slices you will end up with. My container allowed for three layers of slices which were laid overlapping each other.

4. If you are using daikon (white radish) instead of turnip, you need to marinate only a couple of hours. After rinsing, squeeze water out of daikon gently.

5. In the case of a round container like mine, place the slices around the circle so that the thickness of the layer is mostly even.

If you are using a square or oblong shape container, you will lay the slices in rows.

If you are using a container with a smaller/larger surface area, you will have more/less (respectively) layers of turnip slices. In this case, the konbu, chilli and marinade need to be divided into more/less accordingly.

6. Depending on the type of konbu used, it might produce slimy substances when marinated. This is part of the characteristics of the konbu and traditional senmai-zuke.

7. Senmai-zuke keeps about 1 week in the fridge.